You can enter prison for reading in Belarus, why? 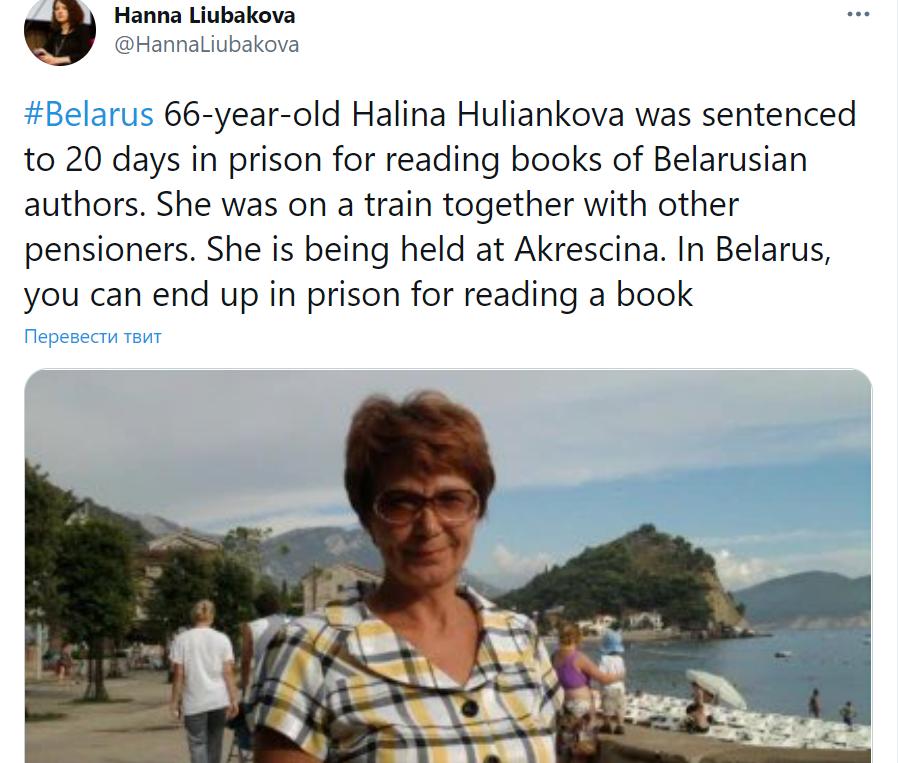 #Belarus 66-year-old Halina Huliankova was sentenced to 20 days in prison for reading books of Belarusian authors. She was on a train together with other pensioners. She is being held at Akrescina. In Belarus, you can end up in prison for reading a book. – Hanna Liubakova (@HannaLiubakova) at 5:55 pm, 3 Mar 2021

This probably belong in politics.se rather than here, but here's what I was able to determine. The original coverage is in Belarusian here which Google translate renders as:

A pensioner with books by Belarusian writers was raided in a Minsk train. Up to 14 people were detained According to human rights activists, on the morning of February 26, people in civilian clothes detained and searched pensioners at the Minsk-North, Masykovshchyna, and Zhdanovichy railway stations.

Today at 10.45 a group of pensioners was detained at the exit of the train at the Minsk-North station. People in mufti were detained. Pensioners read Belarusian books on the train - it was an action in support of the Belarusian language. The detainees were taken to the Zavodski and Partyzanski police departments.

Natallia Leonidovna, 75, is on the list of detainees from Viasna today. She was stopped at Zhdanovichy station, put in a minibus, taken to the police department, and then to the Zavodski district court of Minsk.

She was fined 25 basic units (725 rubles) under Article 23.34 of the Administrative Code and released.

In court, the woman said that she did not ride the train, did not take part in the action, was returning from home outside the city where she lives.

Literature of Belarusian writers was in her bag.

“There were seeds for seedlings and books of Belarusian writers and poets: Neil Gilevich, Vasily Vitko, Artur Volsky. An officer of the police department said that all this was opposition literature. Asked why I was interested in her. I said that I live in Belarus - why can't I be interested in her?” she told Tut.by.

According to the woman, the report states that the pensioners were in white-red-white clothes, shouted "Long live Belarus" and took part in an unauthorized event.

Belarus has two official languages, Russian and Belarus with the latter being a minority language. There have been protests since the last presidential election in September because of the intensified Russification under Alyaksandr Lukashenka (see here). This was, if not part of these protests, interpreted by the authorities as being part of the protests,

Not the answer you're looking for? Browse other questions tagged censorship belarusian-literature or ask your own question.

2
Why is parched grain that grows anyway a metaphor for the Belarusian people?