Who is the “close bosom-friend of the maturing sun”?

John Keats, in his ode "To Autumn", writes

Season of mists and mellow fruitfulness,
Close bosom-friend of the maturing sun.

Who is the close bosom-friend of the maturing sun?

The ode is titled ‘To Autumn’, which means that it is addressed to Autumn, as if the season were a person capable of listening to the speaker. This personification is clearest in the second stanza, where the speaker directly addresses Autumn as “thee”:

Who hath not seen thee oft amid thy store?
Sometimes whoever seeks abroad may find
Thee sitting careless on a granary floor,
Thy hair soft-lifted by the winnowing wind;
Or on a half-reap'd furrow sound asleep.
Drows'd with the fume of poppies, while thy hook
Spares the next swath and all its twined flowers:
And sometimes like a gleaner thou dost keep
Steady thy laden head across a brook;
Or by a cyder-press, with patient look,
Thou watchest the last oozings hours by hours.

In this stanza Autumn is personified in several guises appropriate to the season. First, as a store-keeper in a granary where the harvest is gathered and the grains are threshed and winnowed. Second, as a reaper sleeping after the hard work of cutting the corn, like the harvesters in “Noon, Rest from Work” by Vincent Van Gogh (below). The “hook” in the poem, that “spares the next swath” because the reaper has fallen asleep, is a sickle or reaping-hook like the ones in the painting. 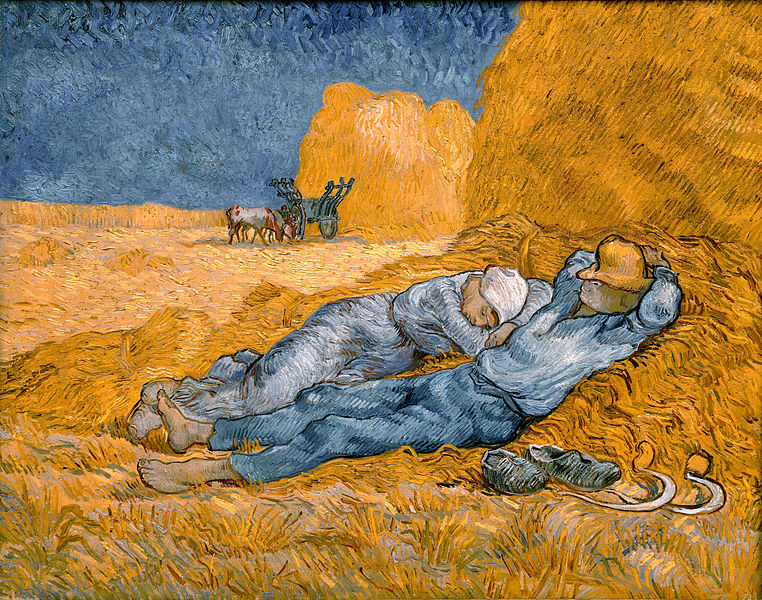 Third, Autumn is personified as a gleaner, wading through a stream with head supporting a bundle of gleanings (that is, crops that had been dropped or scattered by the harvesters). Fourth, as a cider-maker watching the juice drip from the apples in the cider press.

Going back to the first stanza, we can see that it works in much the same way: Autumn is addressed as the “season of mists” in the first line, and as the “close bosom-friend of the maturing sun” in the second. A “bosom-friend” is “a specially intimate or beloved friend” and “maturing” means “bringing something to maturity” (both definitions from the OED), as the sun does to the crops in Autumn.

Not the answer you're looking for? Browse other questions tagged meaning poetry john-keats or ask your own question.

13
Had Keats read any of Homer's works before reading Chapman's translation of them?
7
Meaning of "shade to shade"
7
What was the connection between Hardy and Keats?
4
Who is the falcon, and who the falconer?
3
Are "simple sheep" a biblical reference in Keats' "Endymion"?
1
What does "suddenly close again in the dark" mean in this context?
8
Is Keats' swan with "neck of arched snow" an allusion to Milton's "swan with arched neck"?
2
Who is Mrs Icarus in Carol Ann Duffy's poem?