How does “the socket drop them through” in “Aurora Leigh”?

In book V of Aurora Leigh (1856) by Elizabeth Barrett Browning, Sir Blaise claims that in former days men chose their wives for their virtue and not for their décolletage:

“My dear young friend, if we could bear our eyes
Like blessedest St. Lucy,† on a plate,
They would not trick us into choosing wives,
As doublets, by the colour. Otherwise
Our fathers chose,—and therefore, when they had hung
Their household keys about a lady’s waist,
The sense of duty gave her dignity:
She kept her bosom holy to her babes;
And, if a moralist reproved her dress,
’Twas, ‘Too much starch!’—and not, ‘Too little lawn!’”‡

† Lucia of Syracuse, whose eyes were gouged out before she was martyred. ‡ Lawn, a type of cloth.

A “young man with the German student’s look” replies with an elaborate metaphor comparing the ideals of Sir Blaise’s forefathers with the burning of a rushlight:

“I ask you,—have we leisure, if we liked,
To hollow out our weary hands to keep
Your intermittent rushlight of the past
From draughts in lobbies? Prejudice of sex,
And marriage-laws … the socket drops them through
While we two speak,—however may protest
Some over-delicate nostrils, like your own,
’Gainst odours thence arising.”

In the metaphor, the antiquated ideals (sex-prejudice and marriage-customs) are compared to drops of tallow from the rushlight that fall to the floor, and “the socket drops them through” seems to be an anastrophe for “they drop through the socket”. But how exactly does this work? What little I know of rushlights is they were not planted in a socket like a candle, but held horizontally (or at an angle) by a clip, as in this 1867 painting by Vassily Maximov: 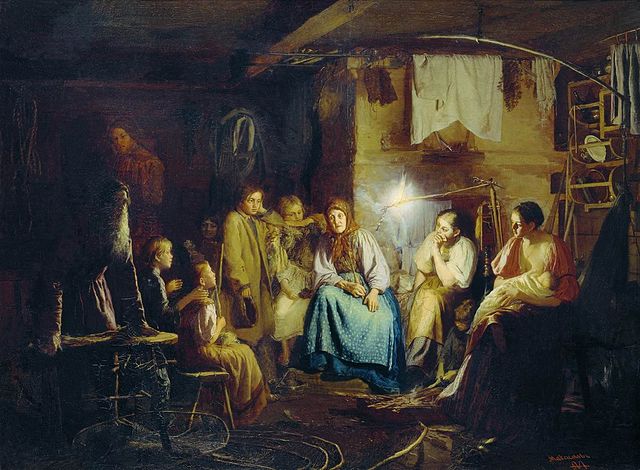 There were indeed some devices that held rushlights vertically. In A Handbook for East-Bourne and Seaford, and the Neighbourhood (1885), G. F. Chambers provides the following figure: 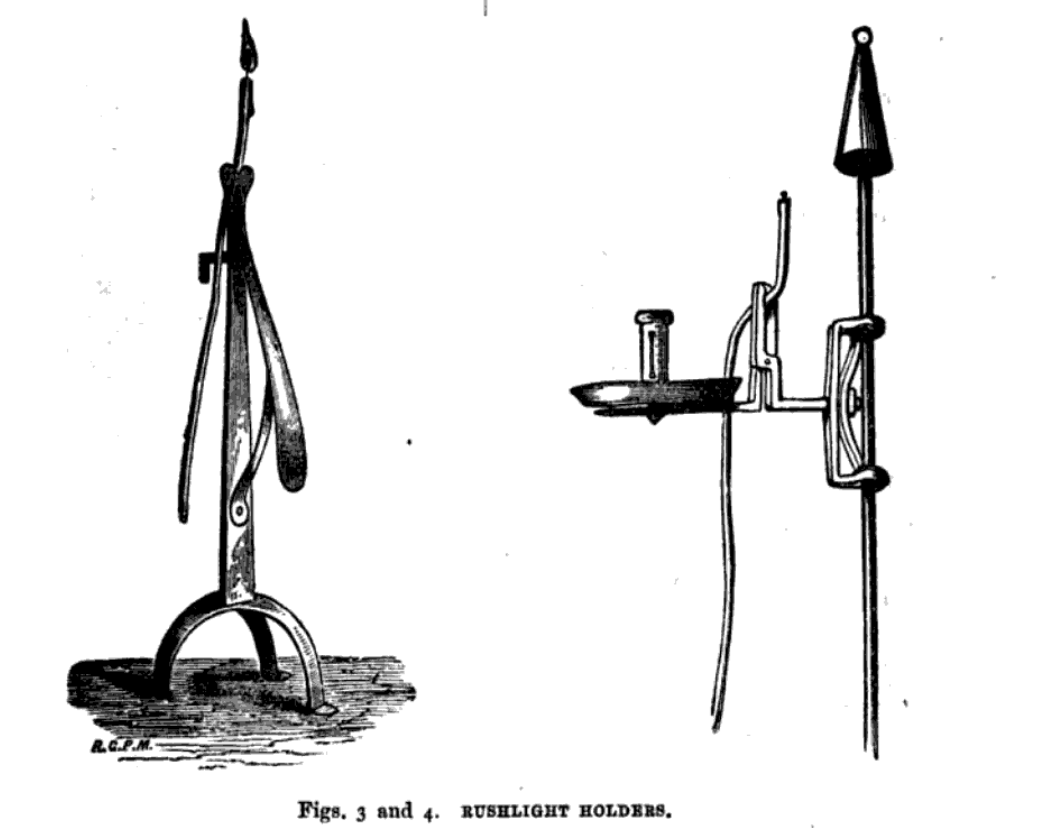 Figs. 3 and 4 represent relics of bygone ages, still occasionally seen in Sussex. ... The rude iron frame has a still under-spring, which keeps the rush in an (approximately) upright position. (p. 19)

Chambers, George Frederick. A Handbook for East-Bourne and Seaford, and the Neighbourhood. London: Edward Stanford, 1885.

As the illustration shows, there is plenty of scope for debris to fall to the floor.

W. M. Thackeray also mentions a particular type of nightlight that would allow dripping on the floor:

It consisted of a long spiral of iron wire. ... The spiral coil would prevent the lanky rushlight from falling over and out of the lamp, but not the red-hot dock from spluttering on to the carpet or boards of the floor. (p. 490)

The quotation from Thackeray clarifies that it is not tallow, but dock that falls to the floor. Merriam-Webster defines dock (noun 4) as follows:

1 : any of a genus (Rumex) of coarse weedy plants of the buckwheat family having long taproots and sometimes used as potherbs

2 : any of several usually broad-leaved weedy plants (as of the genus Silphium)

Presumably it is not the scent of the tallow that is offensive, since the tallow on the rush itself would have the same odor. It is the acrid smell of the burnt plant material once it is no longer covered over by the tallow's aroma.

Not the answer you're looking for? Browse other questions tagged meaning poetry historical-context elizabeth-barrett-browning aurora-leigh or ask your own question.