Understanding and interpreting Yeats phases of the moon

The song will have it
That those that we have loved got their long fingers
From death, and wounds, or on Sinai's top,
Or from some bloody whip in their own hands.
They ran from cradle to cradle till at last
Their beauty dropped out of the loneliness
Of body and soul.

Which the show attributes to Yeats. I'm afraid I don't know much about Yeats but as far as I can understand it's from a poem called The Phases of the Moon, which seems to be within a book called The Wild Swans at Coole.

So I have a few questions:

The song of Robartes in ‘The Phases of the Moon’ describes a pseudo-astrological schema in which the twenty-eight phases of the moon represent the stages of life from birth to death, as well as various aspects of human existence and character:

Robartes. Twenty-and-eight the phases of the moon,
The full and the moon’s dark and all the crescents,
Twenty-and-eight, and yet but six-and-twenty
The cradles that a man must needs be rocked in:
For there’s no human life at the full or the dark.

Yeats is combining two ideas here: lunar phases, which recur in a 29½-day synodic cycle, and lunar “stations”, “houses” or “mansions”, which subdivide the moon’s path against the fixed stars and recur in a 27½-day sidereal cycle. Astrological interpretations of lunar stations are ancient: Chaucer’s ‘Franklin’s Tale’, for example, describes a book of “natural magic”,

Yeats developed an idiosyncratic and detailed interpretation of the twenty-eight lunar stations which he set out in A Vision (1925; revised 1937). Here’s a typical extract: 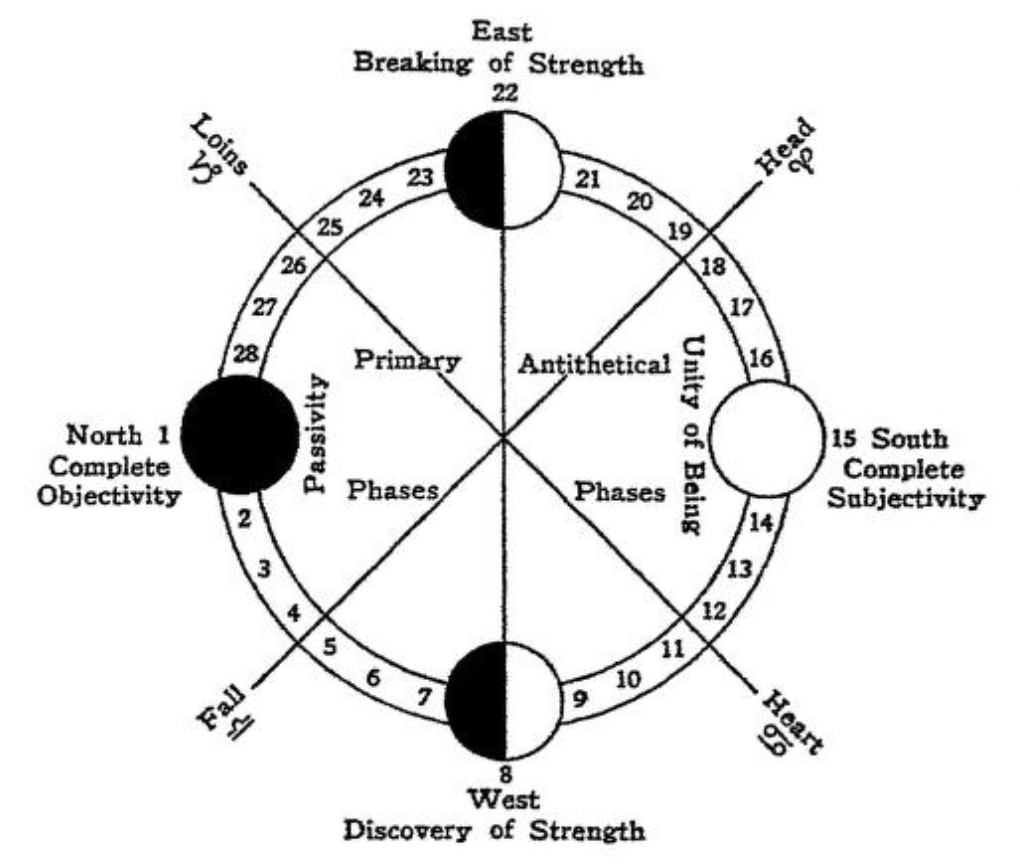 This wheel is every completed movement of thought or life, twenty-eight incarnations, a single incarnation, a single judgment or act of thought. Man seeks his opposite or the opposite of his condition, attains his object so far as it is attainable, at Phase 15 and returns to Phase 1 again.

The elaborate schema presented in A Vision owes little or nothing to the medieval astrological tradition: instead, Yeats says that he got it from his wife Georgie Hyde-Lees via the technique of automatic writing.

On the afternoon of October 24th 1917, four days after my marriage, my wife surprised me by attempting automatic writing. What came in disjointed sentences, in almost illegible writing, was so exciting, sometimes so profound, that I persuaded her to give an hour or two day after day to the unknown writer, and after some half-dozen such hours offered to spend what remained of life explaining and piecing together those scattered sentences. “No,” was the answer, “we have come to give you metaphors for poetry.” The unknown writer took his theme at first from my just published Per Amica Silentia Lunae. I had made a distinction between the perfection that is from a man's combat with himself and that which is from a combat with circumstance, and upon this simple distinction he built up an elaborate classification of men according to their more or less complete expression of one type or the other. He supported his classification by a series of geometrical symbols and put these symbols in an order that answered the question in my essay as to whether some prophet could not prick upon the calendar the birth of a Napoleon or a Christ. A system of symbolism, strange to my wife and to myself, certainly awaited expression, and when I asked how long that would take I was told years.

So if we want to understand what Yeats was trying to say in ‘The Phases of the Moon’, we have to grapple with the esotericism of A Vision. The passage quoted in the question comes after Robartes’ account of the “frenzy of the fourteenth moon”, under whose influence

Robartes. All thought becomes an image and the soul
Becomes a body: that body and that soul
Too perfect at the full to lie in a cradle,
Too lonely for the traffic of the world:
Body and soul cast out and cast away
Beyond the visible world.

Aherne. All dreams of the soul
End in a beautiful man’s or woman’s body.

The “cradle” here refers back to the “six-and-twenty cradles that a man must needs be rocked in” from the beginning of the song: that is, the phases excepting the dark and the full. The corresponding passage in A Vision starts here:

As we approach Phase 15 personal beauty increases and at Phase 14 and Phase 16 the greatest human beauty becomes possible.

So (finally!) we have enough context to tackle the passage from the question. The “long fingers” represent beautiful, elegant hands, and by synecdoche, human beauty generally, which achieves its greatest magnitude in the 14th phase. Beauty, Yeats goes on to say, comes from suffering and death, loneliness and sadness:

Here [in phase 14] are born those women who are most touching in their beauty. Helen [of Troy] was of the phase; […] Is it not because she desires so little, gives so little that men will die and murder in her service?

“Mount Sinai’s top” is where Moses received the Ten Commandments in Exodus 20: perhaps the allusion is to the commandments that are violated in the course of producing beauty via suffering. The “bloody whip” refers back to the “cat-o’-nine-taiis of the mind” that tests the hero “while the moon is rounding towards the full”. In “they ran from cradle to cradle” the “cradles” (as noted above) are the twenty-six crescent phases, so this refers to the development of their life and character according to the schema.

I think that answers all the questions except for (3). ‘The Phases of the Moon’ is in the form of a verse drama, where the characters speak in verse. This is an ancient literary form: the plays of the ancient Greeks were in this form, and of the ancient Romans, and the medieval and Elizabethan playwrights. But more specifically, the poem is a “closet drama”, that is, a verse drama that is intended to be read and not staged. Closet drama was a popular form in the nineteenth and early twentieth centuries: Coleridge, Shelley, Browning, Tennyson, Eliot, and Hardy all wrote works in this form.

Not the answer you're looking for? Browse other questions tagged poetry symbolism william-butler-yeats or ask your own question.

9
How much of The Song of Wandering Aengus by Yeats is based on Irish folklore?
6
Why is the moon "angry" in e e cummings' "the Cambridge ladies who live in furnished souls"?
8
What does "And others, whose breasts love the feel of scapulars," mean in Baudelaire's "Damned Women"?
12
What does "kettle at the heel" mean in this Yeats poem, "The Tower"?
6
Why is this poem by Paul Auster entitled "Spokes"?
2
What is the effect of using “silver” to describe the “horn” in "Madman's Song" by Elinor Wylie?
1
When did Yeats enter into "Virgil's territory"?
4
Who is the falcon, and who the falconer?
3
What does Silverweed's poem signify?