I read a book to my cousin two years ago which I would like to revisit. It was a book about a girl whose mother goes to jail after being accused of stealing drugs from the pharmacy she worked at.

I think the girl's name was Lucy, or maybe Lucy was her dog's name, but I'm not quite sure. After her mom is sent to jail, she is sent to live with this woman who cares for her. At the woman's house (forgot her name), she gets fed more food than she got with her mother (her mother doesn't get much pay).

Lucy also has a dog. I think that the name was Lucky, but I'm not quite sure.

The cover is the back view of Lucy hugging a dog with black and brown fur. They are staring outside a window, and Lucy is wearing a green shirt. The book was published by Scholastic in 2016-2018, but I think that it was most likely published in 2018. The targeted audience is probably 2nd grade to fourth grade, my cousin was in third grade when I read it to her.

Oh, forgot to add something! Lucy and her mother liked to say something like this at bedtime:

The book is written in English

The names are different but the cover and plot appear to match: Strays Like Us by Cecilia Galante:

From the moment Fred (never Winifred!) spots a scruffy little mutt with sad eyes, she knows she's in big trouble. Toby's in bad shape, and Fred longs to rescue him from the old man with the mile-long mean streak who lives next door. But Margery—the straight-talking woman who is fostering Fred—says going over to their house is against the rules.

And since Fred will only be around until her mother comes to grips with her dependence, Fred can't let herself care too deeply. Not about Toby or Margery or Delia, a new classmate whose insistent friendship surprises Fred at every turn. Because the more Fred lets this loveable band of misfits into her heart, the harder it'll be to leave them all behind.

In this story of loss and love, acclaimed author Cecilia Galante examines life's difficult choices and how a girl plus the dog she loves can add up to finding family in the most unlikely places. 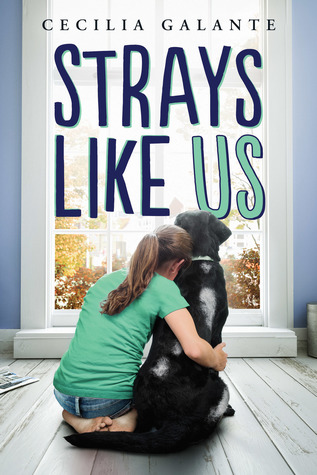 8
Story ID: Brother and sister go back to colonial times
9
A crime/detective story where the protagonist tells his murder story in great detail and still roams free
3
Which Agatha Christie book was this adaption with an Irish woman committing suicide based on?
3
Oldish (at least 15 years) children's book about a little creepy girl going to normal school for the first time?
3
What movie is Holden describing?
5
Anthology: one story about an astronaut falling on flowers, another about a wife trying to kill her husband
4
Identify a book where a teenage girl finds out from her younger sister Martha that she was adopted
3
Children's book about a stuffed dog and stuffed cat who eat each other when their owner leaves
9
Everyone keeps diaries due to regular, town-wide amnesia