I'm looking for the name of a book about a video game that makes its players do cruel acts in real life in order to be able to continue playing the game. The main character is a teenage boy. The game is distributed using CDs, and for some reason the other students try to avoid giving a copy of the game to the main character, but he does somehow end up getting one. The climax is when the game makes a player try to kill someone in real life. The game was originally one where the players had to do kind things in real life, but something that I can't remember happened that involved the target of the game's assassination attempt, so the creator changed the game in order to cause the death of this person. If I remember correctly, the book had a red cover and the title was one word. Any help would be appreciated!

When 16-year-old Nick receives a package containing the mysterious computer game Erebos, he wonders if it will explain the behavior of his classmates, who have been secretive lately. Players of the game must obey strict rules: always play alone, never talk about the game, and never tell anyone your nickname.

Curious, Nick joins the game and quickly becomes addicted. But Erebos knows a lot about the players and begins to manipulate their lives. When it sends Nick on a deadly assignment, he refuses and is banished from the game.

Now unable to play, Nick turns to a friend for help in finding out who controls the game. The two set off on a dangerous mission in which the border between reality and the virtual world begins to blur. 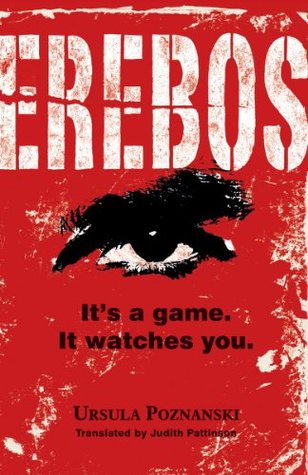 It's a good book, definitely worth a read.

16
Science fiction short story with the ability to jump from world to world
14
Identify a book, love triangle, death of a woman, no Personal Computers
10
Book about a boy who develops several accidentally destructive science projects
4
Looking for an old sci-fi tale about time-traveling
10
Young adult fantasy book about a girl with gray eyes and powers related to metal
2
Novel with a spy/assassin who helps the grand-daughter of a Nazi hunter, speaks Basque from learning it from a book, escapes a cave through water
4
Humorous novel about a man in a religious order who is sent into the outside world by his order, and has his worldview changed by his experiences
3
Book with a series of parallel Earths and a version of the main characters replaces him
12
Medical school that brainwashes students, run by drug company that does unethical experiments
9
Everyone keeps diaries due to regular, town-wide amnesia