Did Shakespeare consider Julius Caesar a tyrant or a martyr?

What is the evidence - either from the text of the play itself, or from surrounding evidence, if any - of which of these interpretations the writer himself intended?

Note that I'm not interested in any analysis of actual historical events, except inasmuch as they may inform us about the play by comparison. I'm asking about how Shakespeare was trying to portray Caesar and the conspirators who killed him. Or to put it another way (assuming everyone involved thought themselves in the right), from whose point of view was the play meant to be written?

It is left open by the playwright

I am going to look at the three characters you have chosen, starting with Cassius.

Brutus was trying to be a freedom fighter, and Cassius was greedy. Since Brutus was the protagonist of the story, he had to doubt Caesar's speech (if Caesar were just a dictator, he would have run him out with no problems, and thus would have no inner conflict), which means that the audience was given both Caesar the dictator, and Caesar the friend.

Both examples of Caesar can be found in the scene I mentioned earlier with his wife and Decius Brutus. At first Caesar is adamant in going (note the third person)

The gods do this in shame of cowardice:
Caesar should be a beast without a heart,
If he should stay at home to-day for fear.
No, Caesar shall not: danger knows full well
That Caesar is more dangerous than he:
We are two lions litter'd in one day,
And I the elder and more terrible:
And Caesar shall go forth.

He then is convinced to stay home (note the first person)

Mark Antony shall say I am not well,
And, for thy humour, I will stay at home.

And then is convinced agin to leave by Decius's ego poking.

'Break up the senate till another time,
When Caesar's wife shall meet with better dreams.'
If Caesar hide himself, shall they not whisper
'Lo, Caesar is afraid'?

Here is an example of Antony speaking in Caesar's praise. It may be a little biased, but the facts are true enough that the crowd rallies around it.

When that the poor have cried, Caesar hath wept: Ambition should be made of sterner stuff:

Not to mention the strong feelings Antony felt at Caesar's death (the dog of war speech). Caesar was a good enough man for him to be loved by both Antony and Brutus.

As asked, the question is close to unanswerable. Specifically, your main question is:

What is the evidence - either from the text of the play itself, or from surrounding evidence, if any - of which of these interpretations the writer himself intended?

Gauging authorial intent from the text itself is a fool's game. After all, you've noted that different performances of the same play slant very differently. Presumably those performances don't add dialogue and incidents wholesale to bolster their interpretations. Even if they selectively edit the play, the fact that they need to leave out bits that don't fit their political vision for the production shows that the text itself is open to multiple readings.

That leaves "surrounding evidence". What could that be? We have no document from Shakespeare that says, in so many words, anything like

I. Cæſar was an inſufferable tyrant, methinks; I ſo depict him in my new tragœdie.

Nor, of course, anything where he says the opposite. The documentary record with regard to Shakespeare is scant enough that some misguided souls feel compelled to waste their lives arguing he could not have written the plays published under his name. It is actually pretty substantial compared to that left by most other actors and playwrights of his age, but that is neither here nor there; the point is, we neither have nor can expect any such clear statement of authorial intent.

Even if we did have some such document, it would make little difference. To say that a work's meaning rests in the author's intention is to commit the intentional fallacy. W K Wimsatt, Jr, and Monroe C Beardsley coined that term in The Verbal Icon, which appeared in 1954, when I was but a wee lad. Their claim is that a work of literature is an icon: it is autonomous, and makes its own meaning through its words and their arrangement.

Critics are unlikely to buy Wimsatt and Brooks's claim entirely any more. For example, the historic specificity of a work's use of language does undercut the claim that the work is autonomous. Words change their meanings. When Tennyson reports Mariana's words thus:

She only said, "My life is dreary,
He cometh not," she said

only a New Critic of admirable dogmatism would insist that the lines could validly be interpreted as expressing Mariana's dejection at her lover's inability to orgasm.

Nevertheless, the claim that an author's intent does not sufficiently account for the meaning of a work is sound. Consider the following text exchange (NSFW language): 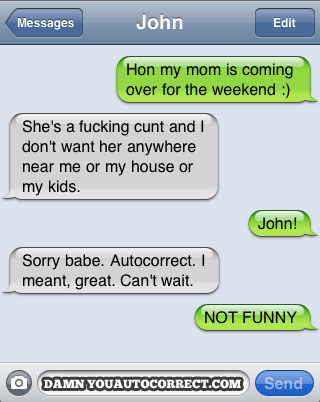 How are we to take John's statement of intent: I meant, great. Do we trust the plain statement of his prior text, or what he says it meant? This is an exaggerated example, but the basic point is true nevertheless. Judging a work by the author's stated intentions has its pitfalls.

So if Shakespeare's text itself is ambivalent, and his intentions both unavailable and no reliable guide, how are we to answer your question:

Did Shakespeare consider Julius Caesar a dictator or a martyr?

The short answer is, we can't. We need to reframe the question. How about this:

What about Julius Caesar allows the play to be read/performed in these two very different ways?

That's a different question, and one we can begin to answer. And as you've already intuited, to make any kind of strong case for our answer we will need to look at both internal and external evidence.

Matrim Cauthon's answer does an admirable job of looking at internal evidence in the form of dialogue and characterization. Another way to examine the internal evidence would be to look at rhetorical devices and poetic tropes. Does the play employ figurative language in a way that points to one representation of Caesar rather than the other? That's an interesting approach, but I'm not going to go there—mainly because it requires another close reading of the text, and I think it would be more useful at this juncture to examine external evidence.

One such piece of external evidence is the play's genre. It is classified as a tragedy, not a history play. From the time of Aristotle, it has been a given that a tragic hero is neither entirely good nor entirely bad, but a great man with a fatal flaw:

a [great] man who is neither a paragon of virtue and justice nor undergoes the change to misfortune through any real badness or wickedness but because of some mistake.

As Matrim Cauthon has argued here, the tragic hero of Julius Caesar is Brutus. In that case, by definition, if Brutus is meant to be seen as flawed for killing Caesar, he is not to be seen as entirely wrong. There must be some admixture of right and wrong in his action. By extension, if killing Caesar is not an entirely evil act, then there must be something about Caesar that allows his assassination to be seen as both a good thing and a bad thing. Asking whether Caesar is a dictator or a martyr is a false choice, and overstates the polarity. Sure, Caesar is a bit of a dictator. He's also a bit of a martyr. That's why Brutus is partly right to assassinate him, and partly wrong. That's why the play is a tragedy; and that's why we can argue endlessly about whether Caesar's assassination was justified or not, and whether Brutus & co. were public heroes who fell victim to the actions of the shameless populist Marc Antony, or vile scum who faced the populace's justified wrath.

In this reading, Caesar too emerges a tragic hero: great and flawed. After all, the play is called The Tragedy of Julius Caesar, not The Tragedy of Decimus Brutus. All Shakespeare's tragedies are named after their tragic protagonists; why should this one be any different?

For that matter, Antony too can be read in this double way: great man, flawed man. Demagogue, loyal friend. He is a tragic hero in his own right; Shakespeare wrote a whole 'nother entire play exploring his tragic dimensions, Antony and Cleopatra. That play is another very important piece of external evidence for any reading of Julius Caesar, and (unlike Julius Caesar itself) is considered one of Shakespeare's greatest works. The fact that the Wikipedia entry for Antony and Cleopatra is several times longer than that for Julius Caesar provides a rough reckoning of just how much the later play is esteemed and discussed in comparison to the earlier.

There are explicit parallels between Antony in the later play and Caesar in the earlier. Both are described similarly. If Cassius says of Caesar:

Why, man, he doth bestride the narrow world
Like a Colossus, and we petty men
Walk under his huge legs and peep about
To find ourselves dishonourable graves.

then Cleopatra says of Antony:

His legs bestrid the ocean. His reared arm
Crested the world. His voice was propertied
As all the tunèd spheres, and that to friends.
But when he meant to quail and shake the orb,
He was as rattling thunder. For his bounty,
There was no winter in ’t, an autumn ’twas
That grew the more by reaping. His delights
Were dolphinlike; they showed his back above
The element they lived in. In his livery
Walked crowns and crownets. Realms and islands were
As plates dropped from his pocket.

Magnificent though this picture is, when Cleopatra asks:

Think you there was or might be such a man
As this I dreamt of?

The response from Dolabella is quite clear:

Cleopatra's portrayal of Antony as an all-conquering, generous, great in bed colossus is seductive; but Dolabella's decided negative does tell us that Antony is not quite all that. Likewise for Caesar. Antony may give us a tremendously attractive picture of him in that great speech, but Brutus's ambivalence should have clued us in that Caesar isn't quite all that either.

To sum up: is Caesar a dictator or a martyr? The play tells us he's something of both. How far he is either one is arguable. That's what makes the play worth arguing over, and enables such widely divergent productions.

Not the answer you're looking for? Browse other questions tagged william-shakespeare julius-caesar or ask your own question.

34
Did Shakespeare write his own stage directions?
18
Did Lady Macbeth communicate signs of her instability prior to the blood scene?
24
Why does Shakespeare's Julius Caesar switch to Latin for the “Et tu, Brute” line?
6
What texts are the sources for the difference between “sometime were” and “some time are” in Shakespeare's Julius Caesar?
7
Why is “…Then fall, Caesar” always left out when talking about Caesar's last words?
2
What does this verse said by Portia in Julius Caesar mean?
3
Meaning of the words “Ambition should be made of sterner stuff” from Julius Caesar
2
Is there a commonly accepted way to measure the relative “popularity” of Shakespeare plays?