When I was young I used to love Michael Rosen. Don’t put mustard in the custard and lots of silly ones like that. I also remember that there was a darker poem in one of the poem compilation books set on the underground about a boy who fell between the tracks and couldn’t get back up. The train was coming and no one would help him.

Now it’s strange as I can remember a fair bit of the poem (not the name but some of the verses) and I am sure it was Michael Rosen but I can’t find the actual poem anywhere when searching using these specific terms.

Down down on the underground

They can’t see me

But I’m down between the tracks

And the train is coming

Not in the right order but they get more and more panicked as the trains lights get brighter.

I remember the picture of the poem was a tunnel with shadow grownups on the platform and train lights in the distance.

I think it was in a poem compilation so I would ideally like to find the compilation title it was included in as well as the title of the poem itself.

For reference I would have been reading this approximately 20-25 years ago, in English, in the UK.

This is Michael Rosen's poem "Nightmare", found in his book Mustard, custard, grumble belly and gravy, which is available to borrow on the Internet Archive:

I'm down the Underground

Waiting for a train

I'm between the lines
and the train's coming.
Can't you see?

I'm still down
Can't anyone see me
down between the lines? 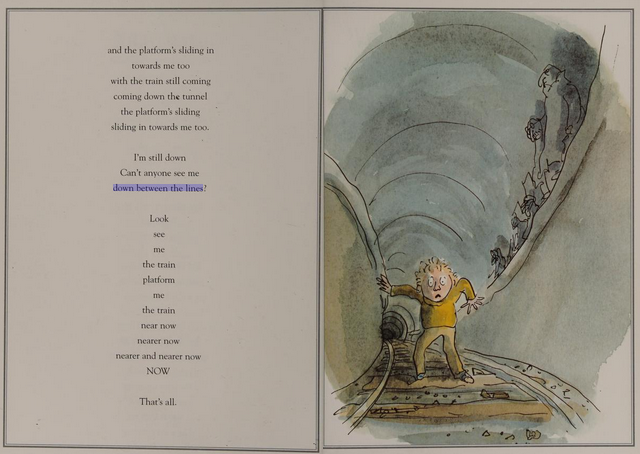 Interestingly, I found an article about Mike Rosen's visit to a school where he mentioned this very scenario as a recurring boyhood nightmare (probably, based on "I used to have") of his:

This was quite a tricky one to find, since Google doesn't index this poem at all. I found the above school-visit quote by searching for variants of your phrases, such as "between the rails" or "between the lines" as well as "between the tracks". The query poem rosen "between the lines" train is coming got me to that page, but no sign of any poem on the same theme. I was about to post my answer just mentioning that school-visit story, and speculating that maybe you misremembered it as a poem. But if that really was a nightmare of his, it's plausible that he'd turn it into a poem! So I gave up on Google and searched the Internet Archive for the phrase "down between the lines", which got me to the right source finally.

Not the answer you're looking for? Browse other questions tagged identification-request poetry or ask your own question.

8
Book about a boy blinded by a firecracker
12
Trying to remember a book about a relationship between a teenage girl and an older man
5
YA book with a girl on horseback almost getting hit by a train
4
Looking for poem in which sleep is as great an equalizer as death
2
Play: With A Memorable Conversation between a villain and his henchman
5
Children's book (maybe German) I read in about 1995, fox and badger need to dig a tunnel to escape from farmer guarding their burrow's exit
5
Story About a Boy Lost in the Wilderness
4
Novel about a Kazakh train station manager