Poetry doesn't have to rhyme or scan or have any of the attributes that we conventionally associate with a "poem". True poetry is something that conveys ideas and feelings that can't be attributed directly to the words.

For instance a poem can describe an experience without ever mentioning the author's feelings; yet the reader will end up feeling those same emotions, just as if they had personally experienced the same situation.

Consider this, from Leonard Cohen:

Like a baby stillborn
Like a beast with his horn
I have torn everyone who reached out for me.

Those three lines can invoke very strong emotions in some people, without ever mentioning what the author himself is feeling.

A well-taken photograph of a glorious sunrise, or a vast expanse, or anything that caused a strong emotional response in the photographer, can similarly bring out emotions in the people that view it.

Imagine what Constantine felt when he saw something like this sundog, which caused him to use that symbol for the new religion he was formalizing: 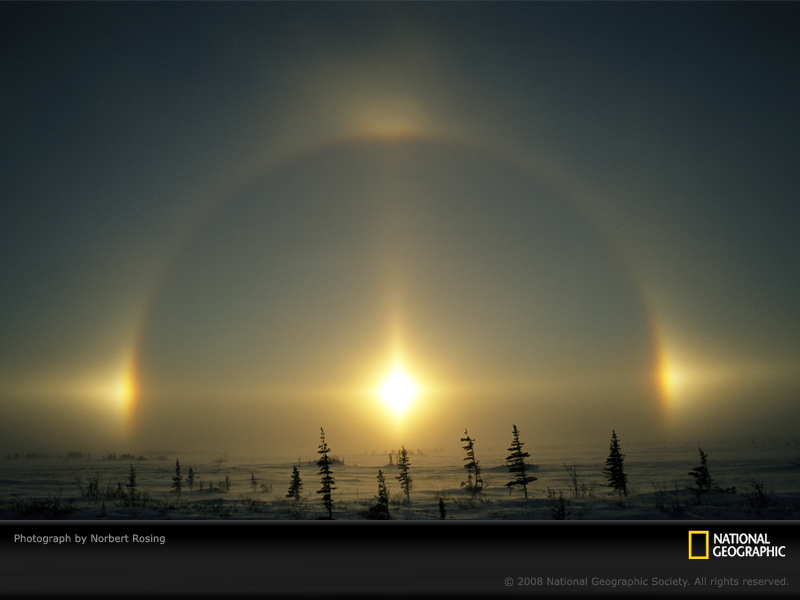 This of course is only a second-hand view. The real poetry was nature itself, which the photograph attempts to pass on to the people that see it.

It shouldn't be taken literally. He's riffing off the emotive associations of poetry. He may also be reaching back to the tradition of lyrical pastoral poetry which extolled the wonders of nature against the corruptions of the city life. It's no accident either, that in Genesis, man was exiled from the garden of Eden, nor that the word paradise is descended from the Avestan pairidaēza, meaning park or garden. Nor that in Islam, the word jannah, which occurs in the Qu'ran for paradise, also derives from the Arabic word, janna, meaning garden.

4
What exactly is the "No Ordinary Sun"?
4
What is the meaning of "editorial novelist" and "literary dude"?
7
Meaning of "Chaos" spoken by Richard, Duke of Gloucester (later Richard III)?
3
What does "nature" mean in "One touch of nature makes the whole world kin"?
2
What does Heraclitus mean by "if you do not expect the unexpected"?
3
What does James Thurber mean by "Humor is emotional chaos remembered in tranquility"?
1
How does "every branch of human knowledge, if traced up to its source and final principles, vanish into mystery"?
2
What did Goethe mean by "each situation, each moment, is of infinite worth"?
2
What does "the one man on earth to her" in "In the Midst of the Alarms"?
0
What does "I were about to set off for the centre of the earth" mean here