Young-readers book of short-stories from 1960s or 70s - "Teenaged Millionaire"?

Daniel’s question a few days ago - about the 1960s kids’ book with “invisible dust” - got me thinking. I remember the grammar school book-buying program Daniel mentions - I think that may have been where I found the book I’m looking for here:

I think the title was “I was a Teenaged Millionaire” or something similar. The narrator was a young teenaged boy. I’m pretty sure the stories were set in the 1930s, because I remember the narrator’s dad encouraged him to “invest” in the stock market, but the boy really just bought stocks because he thought the stock certificates looked cool. He would pin the certificates up on the walls of his bedroom. After the stock market crash, his dad gets angry and says (paraphrasing) “You had a small fortune here, but now these certificates aren’t even worth anything as wallpaper!”

There’s another story about the narrator’s confrontation with a bully. He says (paraphrasing again) “I knew eventually I was going to have to fight (character name).” He ends up digging a pit and setting it as a trap for the bully. The bully falls into the pit - possibly full of mud or slime.

I think the book was a collection of stories like this - all based on the narrator's adventures - but this is all I can remember. I either bought it in the book program Daniel describes, or maybe I borrowed it from the school library. In either case, this would have been in the very early 1970s.

I don’t think it’s Robert McCloskey, but from what I remember the style is similar.

I thought I was fairly certain about at least the gist of the title, but a Google book search for this (and several variations) turned up nothing. Any ideas?

Edit/Update As I think more about it, I suppose it's possible that "Teenage Millionaire" might have been the title of one of the stories, and not of the book itself. I also think it was probably intended facetiously, maybe referring to his failed stock market adventure. He doesn't seem well-to-do in the other stories.

If it's not the book's title, of course it gets a lot harder to track down.

Update/Bounty As the bounty tag says, I want to call attention to this question. It's possible the only way to identify this is to reach someone else who read it way back when and has a better memory than I do.

Got it: Roger Eddy's The Worldly Adventures of a Teen-age Tycoon.

One of the Goodreads reviews mentions:

Most of the stories are long forgotten but the one where our hero starts collecting stocks because he likes the artfully engraved certificates is something I'll always remember. The boy proudly posted each of his stock certificates on his bedroom wall. The boy was overjoyed when the market crashed as he was able to buy more and more different companies and his collection grew and grew.... until his stockbroker father came home and "lost it" ripping up all the worthless paper that his son had collected.

This might be Jean Merrill's Toothpaste Millionaire. From the blurb on Goodreads:

Sixth-grader Rufus Mayflower doesn't set out to become a millionaire. He just wants to save on toothpaste. Betting he can make a gallon of his own for the same price as one tube from the store, Rufus develops a step-by-step production plan with help from his good friend Kate MacKinstrey. By the time he reaches the eighth grade, Rufus makes more than a gallon -- he makes a million! This fun, breezy story set in 1960s Cleveland, Ohio contains many real-life mathematical problems which the characters must solve to succeed in their budding business.

Searching in Google Books gave a few snippets about stock certificates; it seems that the boy millionaire Rufus had a "game" called Stock Market in which he paid his helpers with real money but didn't use real stock certificates. He got investigated by the authorities for this, but they found he hadn't cheated anyone or done anything wrong:

Rufus's toothpaste had in it exactly what he said it did. And every stockholder had been paid his fair share of the profits, even if the stock certificates weren't the real thing. So Rufus couldn't be found guilty of fraud. Only of not filling out certain forms in a certain way.

An image from the book, in case it helps to jog your memory: 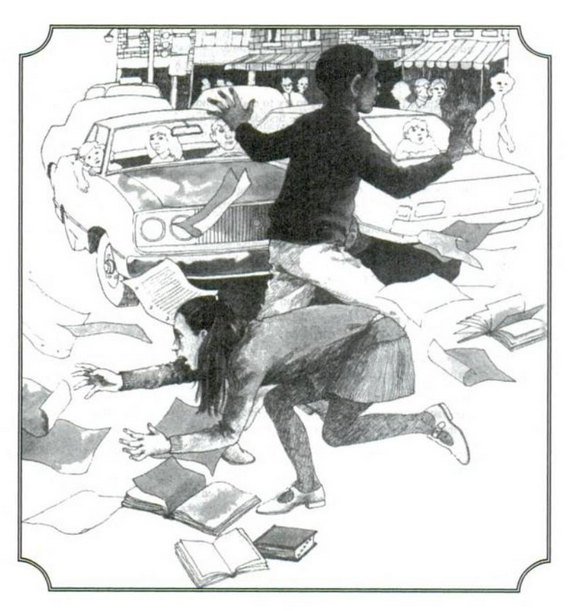 The viewpoint character of the story is not Rufus himself but his friend Kate. It was first published in 1972.

I found this by searching the web for short story "teenage millionaire" bully which directed me to this Wikipedia page for a television series, with one episode based on this eponymous Merrill story. It aired on 27 November 1974.

One remote possibility is Dick Hamilton's Fortune: The Stirring Doings of a Millionaire's Son, published around 1910. Dick Hamilton is another millionaire's son who featured in a series of books for young people. In Dick Hamilton's Fortune, Dick has inherited some wealth from his late mother. He attempts to invest in land, but loses money, and later attempts to purchase stock certificates but they turn out to be fake. His father gives him advice, but there's no mention of wallpaper.

15
African dystopia with children on the run
6
Help me identify a story about a boy who flees to an island with his friends
8
Book about a boy blinded by a firecracker
13
Identify a story about murders of homeless people
5
Book with little people living in a tree
2
Which story referenced the parable of Custer’s last stand?
5
Short animal stories book identification