I first read C. S. Forester’s Beat to Quarters as a teenager in the mid-1970s. I remember it as having been included in a Readers’ Digest Condensed Book, but the Wikipedia listing of these books doesn’t seem to back that up. Could the list on Wikipedia be incomplete? (Doesn’t seem likely.)

Does anybody know whether or not Beat to Quarters was ever published in a Readers’ Digest edition? Or maybe as part of some other anthology? Would have to be something published before circa 1978.

Could it have been a ‘cadet’ edition? These are listed on the Hornblower page of Wikipedia

Failing that, there is this edition:

The first three novels written, The Happy Return, A Ship of the Line, and Flying Colours were collected as Captain Horatio Hornblower (1939) by Little Brown in the US

NB. Beat to Quarters is the US title for The Happy Return.

I have found an eBay listing for the RD edition, with an incomplete photograph of the copyright page, which includes 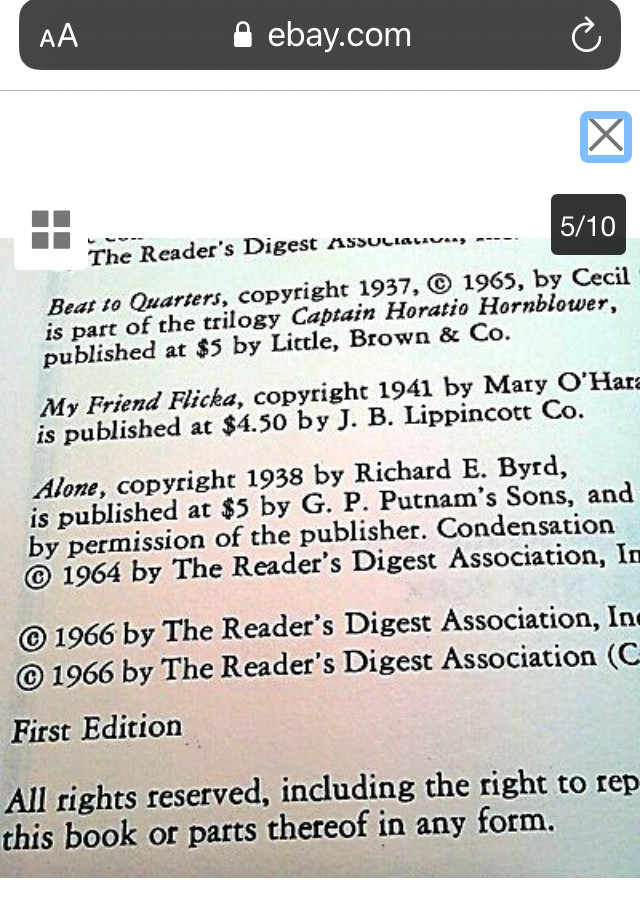 5
First book of Edward de Vere's poems?
4
Have Kenneth Muir's poems ever been published as a collection?
6
How can I find information about the editions of a book?
6
Anthology of literary theory that illustrates each theory by applying it to the same works
5
Anthology: one story about an astronaut falling on flowers, another about a wife trying to kill her husband
2
Young Horror Anthology - Short story with devices passed into a hole in a wall, returned powered by worms...?
5
Matthew Arnold's anthology of literature for use in schools
3
A book by an American ex-spy who took part in the Panama canal-related coup
3
Illustrated anthology book of poetry, with one of the poems being about putting too much sugar in a baby's tea?