Does "a country junction" mean a crossing of roads in the countryside in this passage?

I would like to know what "a country junction" means in the following sentences:

The first car that stopped took us east. The driver, a middle-aged man, eyed us from time to time but asked no questions. We drove silently along country avenues lined with tall chestnut trees, past fields bordered by poppies. I had no idea where we were. We had no map and there were few road signs, but even if there had been more the names of the places would have meant nothing to me. While I took it in, this nameless expanse, you slept with your face against the window.

At some point in the afternoon the driver let us out at a country junction. You tore a coupon from your hitch-hiker’s booklet and passed it to him.

‘Hope you send it in and win a hairdryer or something!’ you cried, and swung the doors shut. He nodded and sped off into the horizon.

In this novel which is set in the 1980's in Poland under the socialist regime, where homosexuality was socially unacceptable, the protagonist Ludwik (a university graduate) left Poland in 1981 to live in the United States of America. And he remembers what it was like back then in Poland, where he went to the agricultural camp (which was mandatory for college graduation). At the camp, he met Janusz, who would soon become his lover. After the camp, Ludwik decided to go to a lake district with Janusz. So they hitchhiked a car, whose driver let them out at a "country junction."

In this part, I wonder whether this "country junction" means a crossing of roads in the countryside, as in the following picture, or has some other meaning that I couldn't guess. 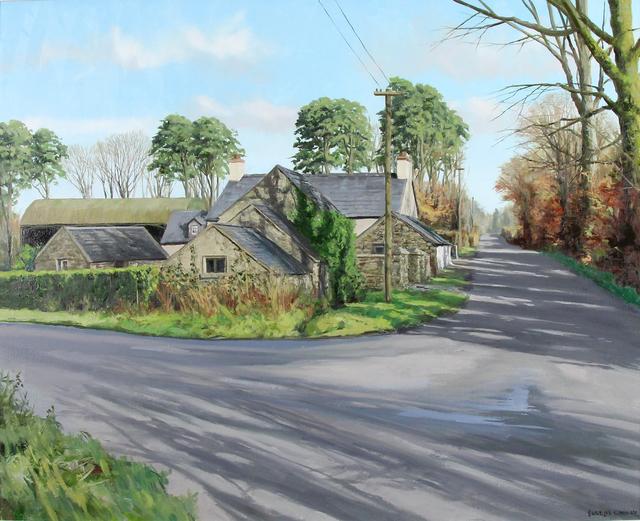 I am an English learner from South Korea, so thank you for your patience in advance as I may not know obvious things. I would very much appreciate your help. :)

Yes, your interpretation is right.

A junction (see meaning 2b) in this context means:

While "country" here is used as an adjective related to meaning 4 of the noun, in the same way as in the phrase "country avenues" in the preceding paragraph:

(adj.) 1 of, relating to, or characteristic of the country

This makes sense in context, since we already know they're driving through the countryside, and the only kind of "junction" to be found there would be a junction of roads (not e.g. an electronic junction).

Not the answer you're looking for? Browse other questions tagged meaning swimming-in-the-dark tomasz-jedrowski or ask your own question.