The wagon was jogging along where the road was very narrow, and Bartlett kept his team stolidly in the center of the way.

“Hello, there, Bartlett!” shouted the young man in the buggy; “half the road, you know—half the road.”

“Take it,” cried Bartlett over his shoulder.

Bartlett either had no sense of humor or his resentment against his young neighbor smothered it, since otherwise he would have recognized that a heavy wagon was in no danger of being run into by a light and expensive buggy. The young man kept his temper admirably, but he knew just where to touch the elder on the raw. His sister’s hand was placed appealingly on his arm. He smiled, and took no notice of her.

“Should think you’d had enough of it by this time.”

“There aint no law,” yelled Bartlett, “that kin make a man with a load move out fur anything.”

I thought at first that "you just try it" meant "show me if you can", that is he knew that it was impossible, but the next passage, which say "otherwise he would have recognized that a heavy wagon was in no danger of being run into by a light and expensive buggy." suggested me that he was talking seriously!!

And 2) Does "You just try it on" have the same meaning?

And 3) Why the young girl protested when he had said "Should think you’d had enough of it by this time"?

"You just try it" means: see what happens if you try. When the young man jokingly threatens to run down Bartlett and his buggy, Bartlett responds saying: if you try to do that, I'll make things worse for you. He doesn't respond logically by pointing out that a light buggy would not be capable of overturning a heavy wagon, but by countering the joking threat with a serious one.

The young man is joking again when he says he'll set the law on Bartlett, because there's no real way he could get a representative of the law on the road at that time who could force Bartlett to move. Again Bartlett doesn't see the joke (he "had no sense of humor") and instead threatens the young man again: if you try to harm me, I will harm you more. Or, as Gritty says (nsfw): 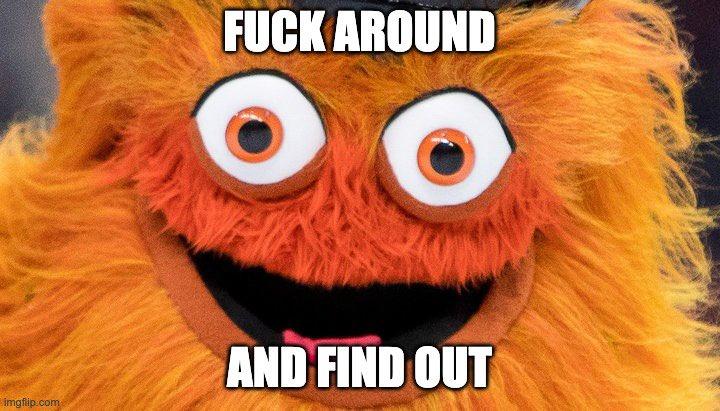 The girl is upset because the situation is getting volatile owing to Bartlett's anger. She is asking the young man not to annoy Bartlett further.

Not the answer you're looking for? Browse other questions tagged meaning robert-barr in-the-midst-of-alarms or ask your own question.

1
Does "think" mean "think about" or "think by" in "The Secret of Father Brown"?
3
What's meant here by "libation to the rites of good-fellowship"?
3
Was it normal to mix up the word "lady" with a man in Canada in 1894?
1
What does "I was paralysed by possibility, caught between the vertigo of fulfilment and the abyss of uncertainty." mean here?
5
Did "equator" have a different meaning from its common one in 19th-century English literature?
3
Where is the main clause of "if" here?
1
What does "hard pushed in argument" mean in this context?
2
What's the significance of "at least" here?
2
What does "draw on" mean in "In the Midst of Alarms?