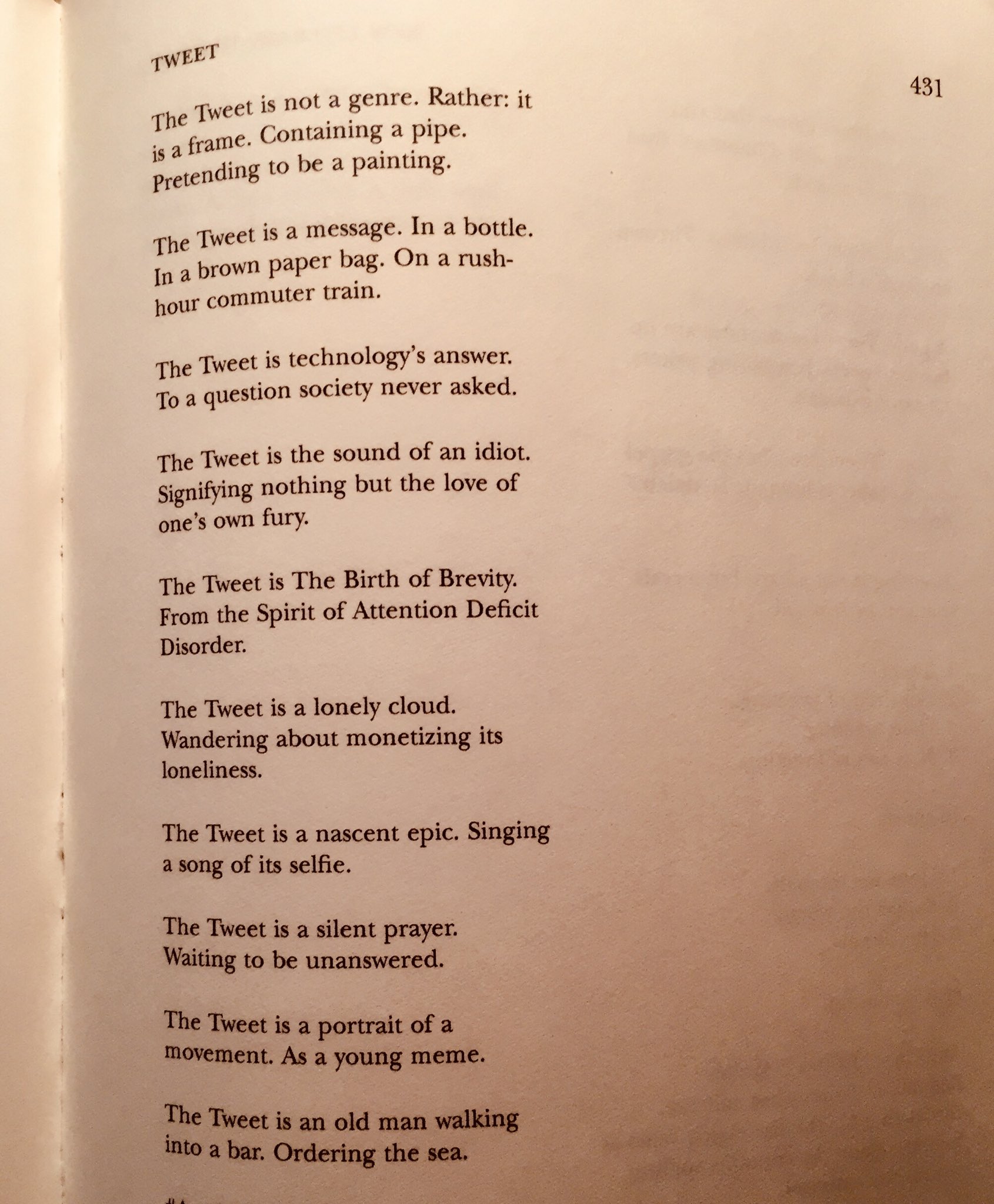 The attached picture is a poem by Eric Jarosinski in which he masterfully alluded to some literary and artistic works.

The Tweet is not a genre. Rather: it
is a frame. Containing a pipe.
Pretending to be a painting.

The Tweet is a message. In a bottle.
In a brown paper bag. On a rush-
hour commuter train.

The Tweet is technology's answer.
To a question society never asked.

The Tweet is the sound of an idiot.
Signifying nothing but the love of
one's own fury.

The Tweet is The Birth of Brevity.
From the Spirit of Attention Deficit.
Disorder.

The Tweet is a lonely cloud.
Wandering about monetizing its
loneliness.

The Tweet is a nascent epic. Singing
a song of its selfie.

The Tweet is a silent prayer.
Waiting to be unanswered.

The Tweet is a portrait of a
movement. As a young meme.

The Tweet is an old man walking
into a bar. Ordering the sea.

Can anyone help to identify the missing allusions?

"Tweet" has the structure of a Twitter thread, where a tweeter posts a series of linked tweets. Each verse alludes to tropes or specific works in a highly compressed and effective way. The poem's wide frame of reference allows Jarosinski to deepen his explorations of the personal, social, and cultural phenomenon that is Twitter.

The second stanza doesn't reference a specific literary work as far as I can tell. Since it's typically illegal to drink on public transit, hiding a bottle of liquor in a brown paper bag is a very common way of getting around this prohibition. Here's a picture demonstrating the trick, albeit not on public transit. That's Pete Buttigieg (center), when he was a candidate for the Democratic nomination for President in 2020, along with talk show and podcast hosts Desus and Nero. 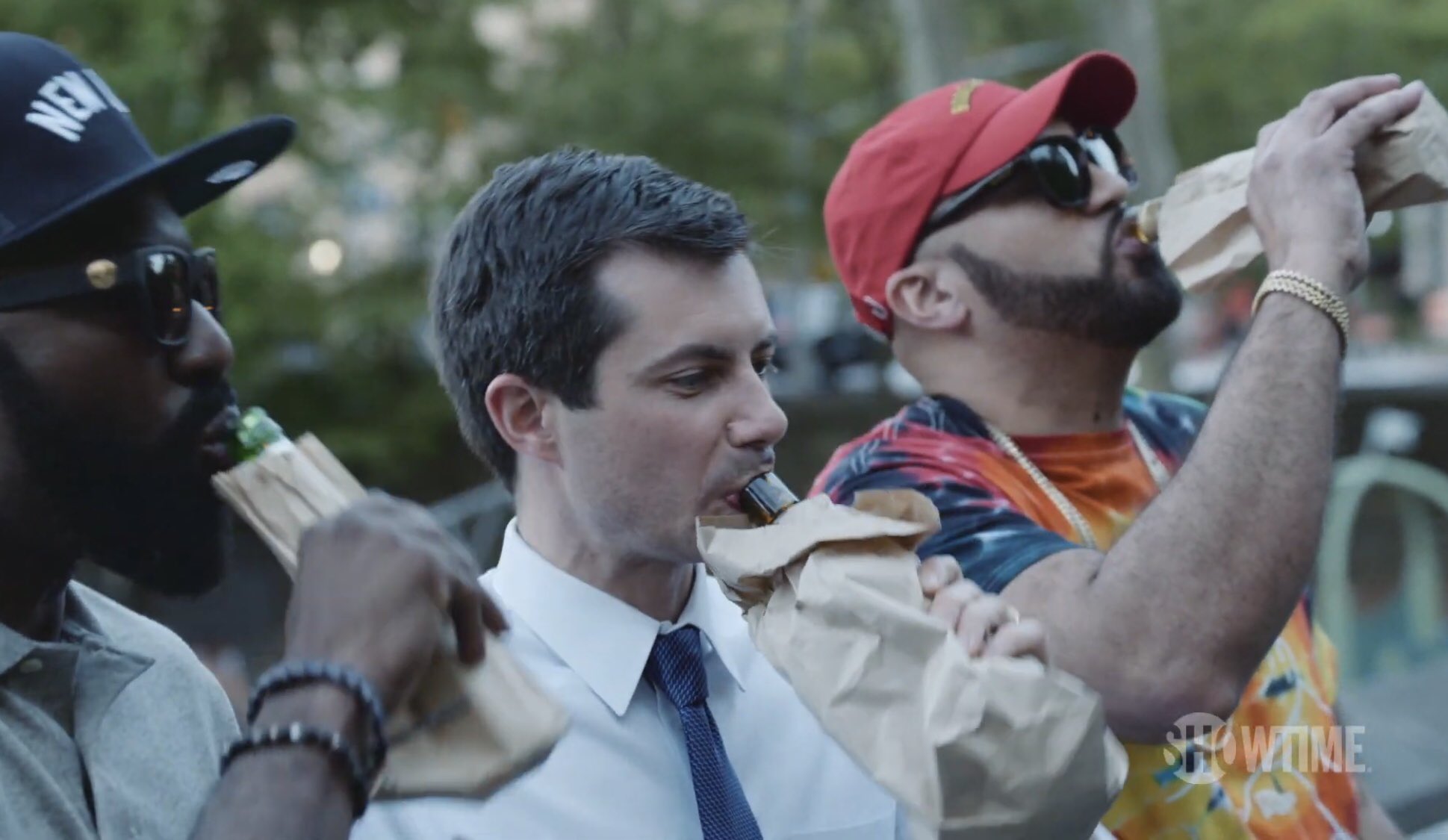 The poet blends the gritty idea of drinking out of a bottle hidden in a paper bag with the romantic notion of a message in a bottle. Twitter is an odd medium in that by default one's audience is pretty much anybody who is on Twitter, rather than just one's "friends" as on, say, Facebook. So sending out a tweet is rather like sending a message in a bottle, in that you don't know whom it might reach. Yet a message in a bottle is enclosed and contained while a tweet is public. Hence the idea of a paper bag, which allows us to do something ordinarily private, or at least something that takes place in an enclosed space, while out in public. The mirroring and contrast here are skillfully handled. A message in a bottle would of course have paper inside the bottle; the paper bag, by contrast, is outside the bottle.

Of course the danger is that the recipient of the message might not be interested. The third stanza references a very common tweet trope, acknowledging that a tweet is often responding to something nobody asked. Here's an example: 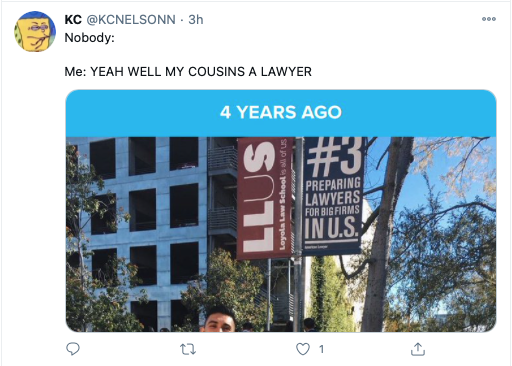 Know Your Meme explains that this phrasal template is "used to mock people who strive to attract attention and tend to provide unsolicited opinions, as well as for observational humor". In the tweet above, for example, the tweeter randomly announces her pride in her cousin's achievement to the world (or at least to the Twitterverse), but also wryly recognizes that the announcement isn't one that people would necessarily care about.

If nobody cares, then of course Twitter is full of people talking past each other, often very animatedly, but ultimately in a futile way. The enterprise is meaningless. The fourth stanza, as @PeterShor pointed out in a comment to your question, is an allusion to Macbeth:

Life’s but a walking shadow, a poor player
That struts and frets his hour upon the stage
And then is heard no more. It is a tale
Told by an idiot, full of sound and fury,
Signifying nothing.       (V.v.27–31)

@PeterShor additionally points out that the fifth stanza alludes to the title of Nietzsche's The Birth of Tragedy from the Spirit of Music. I think there's also an allusion to Polonius's speech in Hamlet:

since brevity is the soul of wit,
And tediousness the limbs and outward flourishes,
I will be brief. Your noble son is mad.       (II.ii.97–99)

The idea of madness links this to the previous verse. ("Idiot" in Shakespeare's time denoted much stronger mental impairment than it does today.) The idea of brevity is, of course, definitive for Twitter, which famously has a limit of 280 characters per tweet. And tweets can, in fact, be extremely witty; it's possibly the most irreverent of the social media platforms. The very short format also forces someone visiting the site to skip very rapidly from one tweet to the next in disjointed fashion, enabling a form of ADD.

The seventh stanza again links two rather disparate things. As @Mary pointed out in the comments to your question, one is Walt Whitman's Song of Myself:

I celebrate myself, and sing myself,
And what I assume you shall assume,
For every atom belonging to me as good belongs to you.

In stark contrast to Whitman's expansive lyric, the other work alluded to is a nursery rhyme:

Sing a song of sixpence,
A pocket full of rye.

Tweeting out one's random thoughts and selfies when nobody cares could be an act as magnificent and all-encompassing as Whitman's egoism. Or rather than recall a classic poem, perhaps the tweet is as lowbrow as a nursery rhyme, and worth only sixpence.

I think that the eighth stanza refers to two songs: Shanice's "Silent Prayer" and Garth Brooks's "Unanswered Prayers". The former is about lovers who are apart praying for each other and looking forward to their reunion, about which they're confident. The latter is about a man's running into his high school sweetheart many years later and realizing that his prayers for the success of their relationship being unanswered actually turned out well. The previous stanza mentions "song", and the poem does rely on this sort of connection between each verse, where a word in one verse provides a springboard to the next, as in the idea of lunacy linking verses four and five. The contrast between the two songs also continues the series of ironic juxtapositions that the poem is built upon. On the other hand, all the other allusions in the poem are literary, not musical, so I could be wrong about this.

The remaining allusions are as you have identified them. It's worth pointing out that each stanza is under the 140-character limit that applied on Twitter until late 2017. Jarosinski, aka @NeinQuarterly, counts as a celebrity on Twitter, his aphoristic observations having earned him over 193,000 followers. His current pinned tweet is apposite both to this poem and the present moment, given the warnings Twitter has been forced to post on the soon-to-be-ex-President's rants: 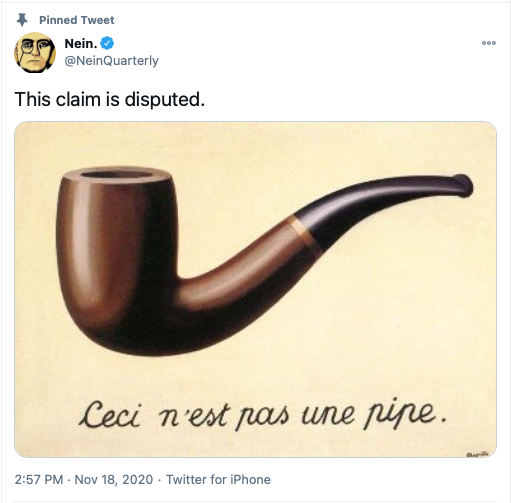 Not the answer you're looking for? Browse other questions tagged poetry allusions eric-jarosinski or ask your own question.

2
Poem that ends with "...whispers, snow!"
10
What makes a poem a Grook?
13
What happened to the epic poem?
8
What is the "Eastern wolf" in this poem?
4
Calvert curricular poem
4
"inlooped flags" in Whitman's poem
1
Starting a poem with a "small letter"
1
Do the opening lines of Frost’s poem “After Apple-Picking” contain a biblical reference?