Why is Dandelion named so?

In Watership Down, one of the rabbits is named Dandelion. The explanation given for the name in the Fandom wiki is this:

He is a yellow-furred rabbit, hence his name [Dandelion].

But while that answers why he has such a name in-universe, I'm still confused on the out-of-universe part. Dandelion is a storyteller and joke-cracker, a strong and hardy rabbit. When I think of dandelions, I think of the weed: 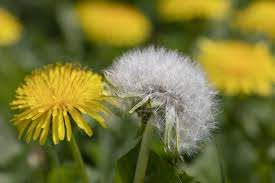 The plant is fragile, breaking apart easily to drift with the wind, or crushed by the slightest pressure. This seems incongruous with how reliable Dandelion the rabbit is. There are other plants which have yellow as a prominent color, and some of the rabbits in the book are not named after plants at all. So why is Dandelion specifically named after this tiny, fragile plant?

Let me preface this answer by mentioning that I'm not convinced Richard Adams intended any particular significance or symbolism in the character names of Watership Down. As I've written about before, the story started off as a road-trip tale for his children, so he may not have put much thought into the names if he was creating many of them on the spur of the moment.

This called for spontanaiety, it had to, and I just began off the top of my head: 'Once upon a time there were two rabbits, called eh, let me see, Hazel and Fiver, and I'm going to tell you about some of their adventures'.

However, we can set aside the author's intent (that's far from the only way to understand the story) and analyse the text by itself, devoid of external considerations. Perhaps the author had subconscious reasons for choosing particular names even if he did so on the spur of the moment, or we can discuss some possible interpretations even if they never entered any level of his mind.

Dandelion is optimistic and hardy, properties symbolised by dandelions.

There is a language of flowers, which has a millennia-long history in traditional folklore, and was especially popularised during 19th-century England and America. However, the dandelion does not appear in this list, as it is a weed which is not considered as a "flower" by many people, so we must look elsewhere for its symbolism and interpretations.

The dandelion flower represents healing, emotional intelligence, the sun, happiness, and surviving through difficulties. Many of these symbolic connections make sense from real properties of the flower: it has health benefits, it's round and yellow like the sun, it has a bright happy colour, and it can thrive in almost any conditions (hence why it's often considered a weed).

The character of Dandelion is generally a happy and optimistic rabbit, retaining his energy even in difficult situations. He's also the fastest runner and the best storyteller among the character, although I can't see how those features factor into the flower symbolism. But his cheeriness and emotional strength are certainly consistent with the symbolic representations of dandelions.

Not the answer you're looking for? Browse other questions tagged name-significance richard-adams watership-down or ask your own question.

12
What is the foundation of the religion in Watership Down?
18
How much weight is given to authors' intentions in literary analysis?

16
Why is the superstate Winston lives in named Oceania in 1984?
15
Why is it called Watership Down?
13
Why is Nausicaa named 'burner of ships'?
8
Why is the Emperor Beyond the Sea named that?
2
Why are primroses emphasized at the start and end of Watership Down?
5
Why do some Lapine words have pronunciation guidelines as footnotes?
1
Why is the encounter with the rats not covered in detail?
6
Why is the snake named "Asmodeus"?