In Ko Un's short poem "In the very middle of the road", why does the narrator take a different path?

There's a short poem by Ko Un that, when translated, goes like this:

In the very middle of the road
two dogs are coupling

I take another route

Why does the narrator take a different path? Are they repulsed by the sight, don't want to interrupt, or what? How can this be interpreted?

Thinking about this poem and the emphasis on the dogs being in the 'very middle' of the path, I picture the coupled dogs not like this 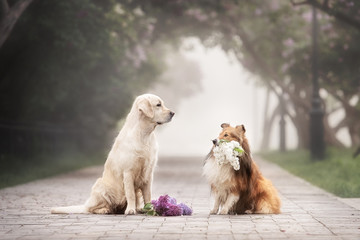 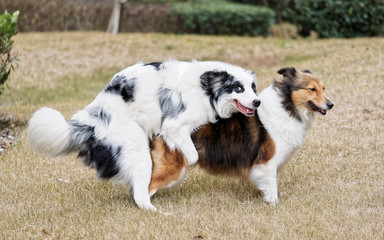 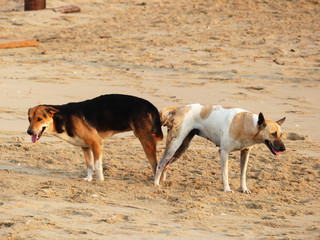 In this situation the dogs can't separate until everything 'subsides' and can get hurt if they try to pull apart: (this is a more detailed explanation from LovetoKnow.com, spoilered just in case anyone is offended by canine genital talk)

In just a few moments, two glands on either side of the penis will begin to swell inside of the vulva, producing a clamping response from the bitch that results in a tie. During the tie, the majority of the sperm are delivered into the canal. The male may choose to remain on top of the bitch, or slightly off to her side. He may also twist around so the two are facing in opposite directions. The important thing is to calmly keep them from pulling on one another so neither dog's genitals are injured. The tie typically lasts from ten to thirty minutes, and then the swelling subsides and the dogs can separate.

In the third scenario, the dogs are not only stuck like that for up to half an hour, but there's a head at each end! Which way do you go around them, in the very middle of the road, with least risk of getting bitten for your trouble?

Going a different way seems like less risk than chancing a bite, and faster than waiting until it’s all over.

It also makes me think about how many of the multi-headed guard dogs of mythology began with a pair of dogs in a copulatory tie being tricky to get past.

Not the answer you're looking for? Browse other questions tagged poetry korean-literature ko-un or ask your own question.

3
What's the significance of the stanza about V for victory in Tony Harrison's V?
6
Why is John Betjeman's poem set on the A30 in particular?
5
What is the original Korean title of "The Tiger and the Persimmon"?
3
Are the sun and moon generally personified in Korean folklore, or just in this origin story?
2
What's with the dogs in Mark Strand's "Eating Poetry"?
4
What's the connection between millennia of time travel and waiting for a bus?
8
Identify a poem entitled Mock Song, written in middle English in the 13th-15th centuries
6
Edna St. Vincent Millay's "Figs from Thistles: First Fig"