What's exactly meant by "on its homeward journey" in "The Just Men of Cordova"?

In chapter 12 of The Just Men of Cordova (1917) by Edgar Wallace, the author is describing a horse race:

The field was at the starting-post: “Your horse is drawn in the middle,” she said.

He put up his glasses. He could see the chocolate and green plainly enough. Sir Isaac’s—grey vertical stripes on white, yellow cap—was also easy to see. He had drawn the inside right.

The field was giving the starter all the trouble that twenty-four high-spirited thoroughbreds could give to any man. For ten minutes they backed and sidled and jumped and kicked and circled before the two long tapes. With exemplary patience the starter waited, directing, imploring almost, commanding and, it must be confessed, swearing, for he was a North-country starter who had no respect for the cracks of the jockey world.

For Sir Isaac the period of waiting had increased the tension. His hands were shaking, his glasses went up and down, jerkily; he was in an agony of apprehension, when suddenly the white tape swung up, the field bunched into three sections, then spread again and, like a cavalry regiment, came thundering down the slight declivity on its homeward journey.

A roar of voices. Every glass was focused on the oncoming field. There was nothing in it for two furlongs; the start had been a splendid one. They came almost in a dead line. Then something on the rail shot out a little: it was Timbolino, going with splendid smoothness.

“That looks like the winner,” said Horace philosophically. “Mine’s shut in.”

In the middle of the course the jockey on Nemesis, seeking an opening, had dashed his mount to one which was impossible.

He found himself boxed between two horses, the riders of which showed no disposition to open out for him. The field was half-way on its journey when the boy pulled the filly out of the trap and “came round his horses.”

Timbolino had a two-length clear lead of Colette, which was a length clear of a bunch of five; Nemesis, when half the journey was done, was lying eighth or ninth.

Actually I don't have much knowledge about the horse racing, and I searched a lot about the possible meanings of these bolded words, but I didn't get them. 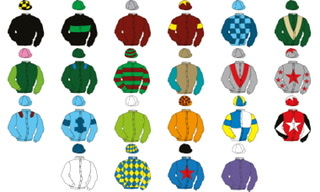 I can’t track down why ‘his’ rather than ‘the horses’, but this is consistent in search results. If you try changing ‘his’ to ‘the’ you immediately lose racing-specific results. Which I think explains why it’s in inverted commas, it’s a set phrase that doesn’t appear to entirely make sense, so the author is indicating that it is a set phrase, part of the industry jargon, rather than his own coinage.

Not the answer you're looking for? Browse other questions tagged meaning the-just-men-of-cordova edgar-wallace or ask your own question.