What are "deadly voids and unbidden infidelities" in "Moby-Dick"?

From chapter 7 ("The Chapel") of Moby-Dick by Herman Melville:

Oh! ye whose dead lie buried beneath the green grass; who standing among flowers can say—here, here lies my beloved; ye know not the desolation that broods in bosoms like these. What bitter blanks in those black-bordered marbles which cover no ashes! What despair in those immovable inscriptions! What deadly voids and unbidden infidelities in the lines that seem to gnaw upon all Faith, and refuse resurrections to the beings who have placelessly perished without a grave. As well might those tablets stand in the cave of Elephanta as here.

What does the narrator mean by the sentence in bold?

English is not my native language. I don't want to skip any line of this book. I want to know what the narrator is thinking here. I tried to use Google Translate for this particular line, which wasn't of any help.

This sentence is far from easy even for native English speakers! But we can get at its meaning if we pay attention to the context, and take it word by word.

Ishmael is attending the Sunday morning service at the Whaleman’s Chapel (a lightly fictionalized Seamen's Bethel) in New Bedford, Massachusetts. On the walls of the chapel are marble tablets commemorating sailors who were lost at sea, for example one reads: 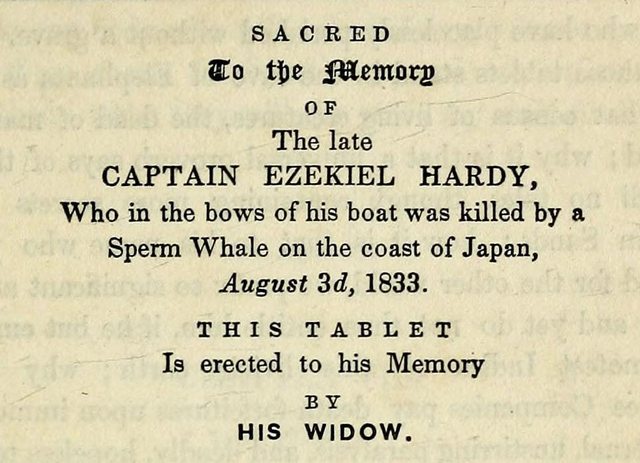 Ishmael ponders on the feelings of the relatives of these dead sailors, and imagines that their grief is increased by the loss of the body of the deceased. When a loved one is buried in the churchyard, Ishmael says, there is some comfort in being able to lay flowers on their grave, but in the case of men lost at sea, there are only “black-bordered marbles which cover no ashes”. Then we get to the difficult sentence.

It is perhaps no coincidence that the last of the cenotaphs observed by Ishmael in the Whaleman’s Chapel is dedicated to a captain named Ezekiel Hardy. In the contexts of burial and bereavement, the captain’s name conjures images of the Valley of Dry Bones that God reveals to Ezekiel the prophet. Despite its initially grim appearance, this biblical valley is a trope of optimism: the Lord shows Ezekiel how the power of the Holy Spirit can restore flesh and skin to the desiccated, scattered remains and breathe new life into lifeless bodies (Ezek. 37:1–10). The dry bones of the valley attest, not to the finality of loss, but to the miraculous power of the Lord to bring new life to the spiritually desolate. Melville, however, renders darker prophecies than Ezekiel. In his narrative, the prospect of resurrection is thwarted because Captain Hardy has left no bones to rejoin and return to the flesh. The bones of Melville’s Ezekiel lie not in a dry valley, but beneath the waters of the Pacific; the wherewithal for the performance of the miracle has been lost.

Not the answer you're looking for? Browse other questions tagged meaning moby-dick herman-melville or ask your own question.

46
Why is there so much technical detail of whaling included in Moby-Dick?
9
Is there any significance to the races of mates and harpooners in Moby Dick?
9
What exactly are masques and bergamasques?
8
What did Melville mean by the "Pythagorean Maxim" in "Moby Dick"?
5
Is there a math mistake in Moby Dick Chapter 99?
3
Bewilderment at "not the smallest atom stirs ..." in "Moby-Dick"
5
Melville's chain of thought in the "great democratic God" passage in "Moby-Dick"
5
What are nuts and super-nuts in Saki's "Beasts and Super-Beasts"?