What is Watson's "old service" in "His Last Bow"? 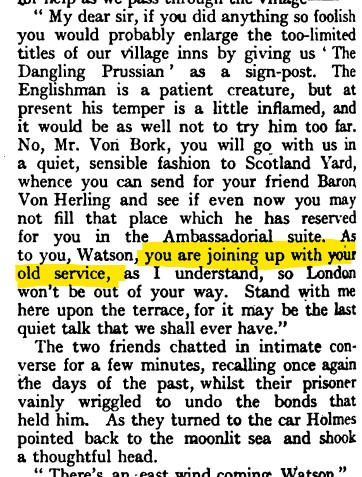 The form of 'joining us with your old Service' has been continued into many editions, including the Gutenberg text, but on balance, the legibility and clear meaning of the original version gives no reason to suppose that the change from the Strand edition was intended to be a correction rather than a typographical error in its own right.

4
What did Holmes mean when he referred to Watson's habit "of telling a story backward"?
4
What does "the service of a vast, vulgar, and meretricious beauty" mean here?
6
What does the last line of Nalo Hopkinson's "Shift" mean?
2
What was the case where Sherlock answers Watson's private thoughts?
0
Implication of "your four-in-hand takes the prize" in "His Last Bow"
3
What is "the Segregation of the Queen" in "His Last Bow"?
4
What does "hearing a story was the last stroke of the hoe" mean?
2
Is Von Bork's "I've been there" the idiomatic expression here, in "His Last Bow"?
3
What is "the Saar" in The Last Lesson?
4
What is meant by "descent of their last end"?