The Brothers Karamazov - What is "The Bell"?

Do you remember? It's splendid. Why are you laughing? You don't suppose I am fibbing, do you?ŌĆØ (ŌĆ£What if he should find out that I've only that one number of The Bell in father's bookcase, and haven't read any more of it?ŌĆØ Kolya thought with a shudder.)

What is "The Bell" that Kolya is referring to?

ąÜąŠą╗ąŠą║ąŠą╗ (Kolokol meaning ŌĆ£bellŌĆØ) was a mid-19th century dissident Russian-language newspaper, printed in London and Geneva to evade Russian state censorship. Commenting on the lines of verse quoted by Kolya:

Long will you remember
The house at the Chain bridge

These two lines are from a widely known antigovernment satire, repeatedly printed in various ├®migr├® periodals and almanacs, first in The North Star 6 (1861): 214. Though it did not appear in The Bell, best known of these publications, The Bell did print a sequel to this poem (no. 221 [1 June 1866], p. 1812). [ŌĆ”] At any rate, Dostoevsky commits another anachronism, since KolyaŌĆÖs father had died many years before the appearance of any of these publications. The Bell was published from 1857 to 1867, which means that it began to appear after Mr. KrasotkinŌĆÖs death. 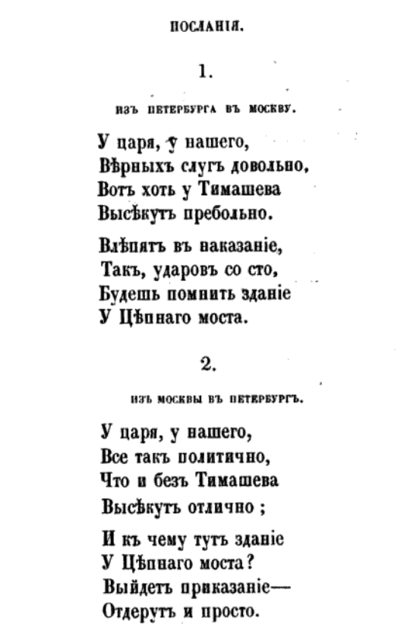 The two lines Kolya quotes are the last two lines of the second verse:

The point of the paragraph is that Kolya is showing off, pretending to knowledge of dissident literature that he doesnŌĆÖt possess: his father only had the one issue of The Bell and Kolya hasnŌĆÖt even read the whole of that.

This must refer to Kolokol, which means "Bell" or "The Bell" (Russian doesn't have a word for "the") in Russian. It was a weekly Russian-language 19th-century newspaper with significant revolutionary and socialist leanings, which was banned in Russia at the time. From the Wikipedia article:

At Kolokol's base was a theory of Russian peasant socialism, elaborated by Herzen. Its political platform included democratic demands for liberation of peasants with land, and abolition of censorship and corporal punishment. Besides the articles by Herzen and Ogaryov, Kolokol published a variety of material on people's living conditions, social struggle in Russia, and information about abuses and secret plans of the authorities.

This would make sense in the context of the character Kolya, a young boy who proclaims his socialist beliefs without fully understanding what he's talking about. (At least according to Wikipedia: I haven't read The Brother Karamazov myself.) He is thinking to himself that a real socialist firebrand, in Russia at that time, might be expected to be an avid consumer of Kolokol, but he has only seen one issue in his father's bookcase.

Not the answer you're looking for? Browse other questions tagged russian-literature fyodor-dostoyevsky the-brothers-karamazov or ask your own question.

5
The Brothers Karamazov - What is the "Chain bridge"?