The Brothers Karamazov - What is the "Chain bridge"?

I say this only to you. I am not at all anxious to fall into the clutches of the secret police and take lessons at the Chain bridge.

What is the Chain bridge?

Where the translator (Constance Garnett) used “secret police”, the Russian text is “Третьего отделения” (tretyego otdeleniya) meaning “third section”, that is, the Third Section of His Imperial Majesty’s Own Chancellery, the secret police department of the Imperial Russian government from 1826 to 1880.

Its headquarters were near the Panteleymonovsky Bridge in St Petersburg, which was (at that time) a chain bridge, that is, a suspension bridge with the deck suspended from chains instead of wire cables. Here’s how it looked in 1853: 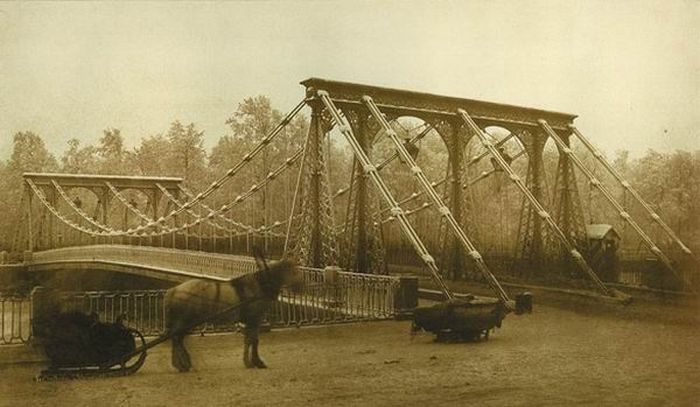 The description of the secret police headquarters as “the house at the chain bridge” evokes the chains with which the prisoners were bound, and the “lessons” which Kolya does not want to learn there are a euphemism for torture.

See this answer for the origin of the lines of verse that Kolya quotes in this passage.

Not the answer you're looking for? Browse other questions tagged meaning russian-literature fyodor-dostoyevsky the-brothers-karamazov or ask your own question.

4
The Brothers Karamazov - What is "The Bell"?