The Torah is written without vowels?

In Moonwalking with Einstein by Joshua Foer, Chapter 7 ("The End of Remembering"), he writes:

One of the last places where this tradition of recitation still survives is in the reading of the Torah, an ancient handwritten scroll that can take upward of a year to inscribe. The Torah is written without vowels or punctuation (though it does have spaces, an innovation that came to Hebrew before Greek), which means it’s extremely difficult to sight-read.

What does he mean by saying that the Torah is written without vowels?

As other answers have mentioned, what is meant is simply what is said: many renderings of the Torah leave out the vowel markers (and punctuation). As several comments have offered, this is a common feature of a lot of Hebrew text, and more broadly, is found in quite a few languages (off the top of my head, I believe Arabic is also often written this way, and ancient Egyptian hieroglyphics were always written this way—that writing system doesn’t even have a way to indicate vowels). You sometimes see words from these languages rendered this way in the Roman alphabet, particularly 1. the names of deities, and 2. ancient words where the vowels used are uncertain.

Why are Hebrew and Arabic often written without their vowel markings? Because for a long time, they didn’t have any, the same as Egyptian hieroglyphics. These writing systems are known as abjads,1 after the first four letters of Arabic, just as “alphabets” (which have vowels) are named for the first two letters of Greek.

But what I think is the real impetus behind this question is something more like “How?” or perhaps “Why?” And the answer is simply because it works, and changing it makes things harder to read (for those who already know how to read it the other way), not easier. Fluent readers don’t read letter-by-letter, after all; they recognize words, or even phrases, and don’t check each individual letter. For a semi-infamous example in English, there’s the “Cmabrigde Uinervtisy” chain e-mail that seemed to end up in everyone’s inboxes around the turn of the millenium. Dictionary.com has a solid write-up of it, but as a demonstration, look at this:

Aoccdrnig to a rscheearch at Cmabrigde Uinervtisy, it deosn’t mttaer in waht oredr the ltteers in a wrod are, the olny iprmoetnt tihng is taht the frist and lsat ltteer be at the rghit pclae. The rset can be a toatl mses and you can sitll raed it wouthit porbelm. Tihs is bcuseae the huamn mnid deos not raed ervey lteter by istlef, but the wrod as a wlohe.

The chain e-mail isn’t particularly accurate—and definitely leaves out a lot of details. But nonetheless, this is fairly readable for most English readers, and those mostly aren’t English words. There was another similar chain e-mail—that I can’t find now, so I suppose it was less famous—that had you counting the letter “o” in a fairly-long passage, and most readers got it wrong because they consistently skipped the word “of” even when they were looking for o’s. And that’s because the brain is lazy and skips work when it can—so if it can tell at a glance what a word probably is, it’s not going to carefully go through all the letters.

Same thing happens in every other language, and that includes those written in abjads. And since the reader’s brain is just recognizing words, it doesn’t need vowel marks—indeed, that might mess up your recognition of the word if you are used to it without.

And we could do the same in English if we wanted—after all, can you read this?

(Not easily, I’d guess, but you probably more-or-less can—and if this was normal, it likely wouldn’t even be hard).

The other thing here, as TRiG and slebetman mentioned in comments, is that the languages themselves lend themselves to this kind of writing style. In the English example above, there are a fair few ambiguous entries, even only considering common words. Other languages could be worse—most Romance languages require vowels, because a word may well differ only in its vowels when it is declined and/or conjugated. Since those languages rely on those different forms to make a sentence intelligible, you really can’t leave the vowels out. But the abjads for Arabic and Hebrew are, well, designed with those languages in mind—they can handle the different words of those languages with limited ambiguity. Those languages don’t often rely on vowels as the only distinctions between words. If they did, their scripts would most likely have been alphabets instead of abjads, because they would have needed to indicate vowels to make it understood. But since they don’t, the abjad works fine.

Vowels in Hebrew - called n'kudot - are written as dots and lines surrounding the letters. In an actual Torah - written on parchment - these symbols aren't there.

As an example, here's a picture of a book called a "tikkun", which is used to help learn the chanting for the traditional way to read the Torah: 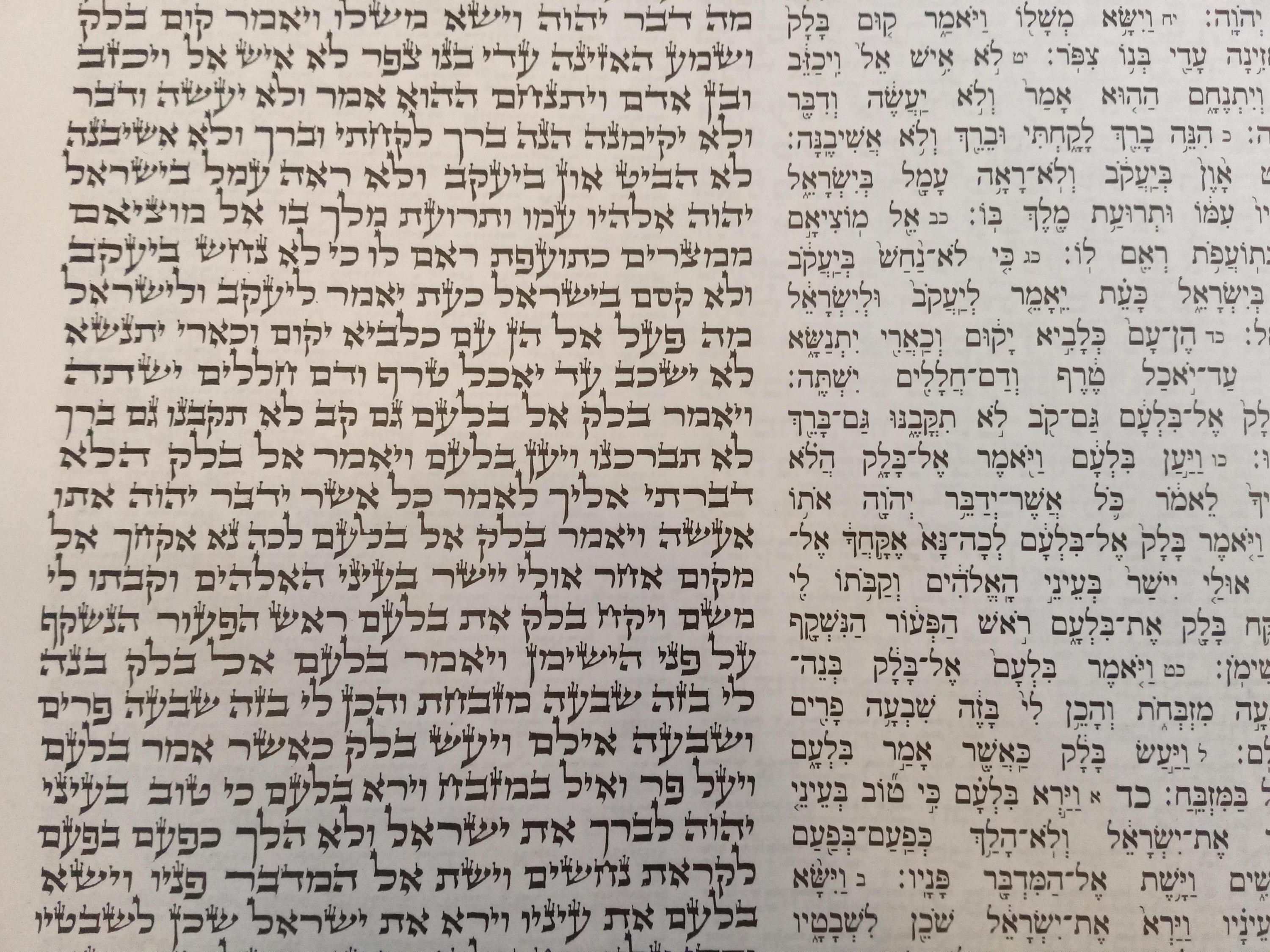 On the right side is text with punctuation and vowels. You'll notice that there are dots and lines and other symbols surrounding the text. (Along with the n'kudot is the "t'amei mikra", which show the traditional chanting tune.)
On the left is the text as it appears in the Torah. There is no punctuation or vowels. (You'll notice that there are symbols on top of certain letters - these are called "crowns" and are decorational for the most part.)

The vowel pointing was added about 600 AD.

There are two speculations as to why:

#1 doesn't make much sense since vowels are not used in Modern Hebrew newspapers. #2 has the strength of argument in that the Jews who rejected Christ had persecuted the church until the government put an end to it. Allusions to Christ in the text were then obfuscated by the addition of vowels.

'Amar' means both 'word' and 'Lamb'. [1] When John the baptist said "Behold the Lamb of God, some heard him say "Behold the word of God." but by the addition of vowels we see in the Hebrew dictionaries that they are now two words; amar, and emeer. The effectiveness of the obfuscation is noted in the Theologian's problem of where John got the 'Logos' in John 1:1, presuming that it is a new idea from Philo, rather than a natural part of the Hebrew language.

The prevalent idea that the square text doesn't have vowels is actually a modern invention. The language has been re-invented a couple times. Most recently it was a dead language which was reconstructed to support the Zionist movement.

According to the Sefir Yetzirah, a book commonly believed to be an esoteric source for Cabbalism, is actually a kind of Grammar for Hebrew, but it begins with phonetics. It explains that vowels are breath and consonants interrupt breath.

Every consonant has an 'implied' vowel. When you speak a consonant you naturally speak the associated vowel. Some have the breath before the consonant, some have it after as the breath explodes from the build up of air behind it.

It is said that there are five consonants that act like vowels, but because the vowel (breath ) is foundational to all consonants, it is better explained as five vowels which also are used like consonants. they are placed on one side of the consonant to change the natural flow of area around the consonant 'b' ב is b-ah 'ab' אב is 'ahb' .

Not only does Hebrew have vowels, but all the letters have meanings which are combined to form the meaning of the words.

Adam came from the adamah (ground) and is formed of blood (dam) and spirit (ah). This is called 'formations' when a word is built up, and 'notarikon' when the word is divided into it's smaller parts.

The issue concerned with the OP is based on the common misconception, which gives us an idea of his pedantic understanding of Hebrew. When you sight read, you do not look at the details of a word. Consider aplpe , Jhon, Cnostinoplante. As long at teh frist ltteer and lsat are in pitosoin, and the rest of the letters are there, we can still read them easily. We can also read them easily if the lower half of the letters are chopped off by the shape of the line formed by letters in the proper order on top. Sight reading needs very little information.

Not the answer you're looking for? Browse other questions tagged the-bible hebrew-literature orthography or ask your own question.

9
How long have the cantillation marks been around?
9
In The Mezzotint by M. R. James, what is a "Door Bible"?
3
Are angels ever depicted as having golden halos floating above their heads in the Bible?
1
What is the intention and purpose behind the "dash style" book format compared to the "quote style" one?
2
What does the line about the Tower of Babel mean in Ishay Ribo's "Keter Melucha"?
2
What does the line "and who will bear the consequences" mean in Ishay Ribo's "Keter Melucha"?
1
What does asking how to write songs with millions of views have to do with the rest of the song in "אלוף העולם"?