So, I was recently re-reading the Inferno, and I have come across this quote which I can't make sense of.

It seemed rather weird that it wouldn't be translated (I am reading the Dorothy Sayers translation), so I tried to translate it. Unfortunately, what came out ("Daddy Satan, daddy Satan aleppe") didn't make any more sense.

What does this quote mean?

There are a nauseatingly numerous amount of theories on what that illustriously ambiguous line could mean. It very well might have merely been indented by Dante to represent a sort of invocation (and legibility is not usually the most overwhelming of necessities when clucking one's lips on an Invocation). The chant most likely refers to the Triumph of Satan. It is screeched forth by Plutus, Roman god of wealth, and the underground mines therein. To Dante, Plutus is characterized as a verminous watcher to the Fourth Circle of Inferno. The Fourth Circle being the punishment of overindulgence in wealth and gluttony in the acts of greed, hence the guardian of the circle is fittingly Plutus.

Now whether that opening line is cried out in content, misery, or anger (More likely anger as the lines following reads thus:

Be silent, thou accursed wolf / Consume within thyself with thine own rage.

That is beside the point of attempting to translate the line.--Although our worshipful William Blake made Plutus look rather wretched in his fitful madness: 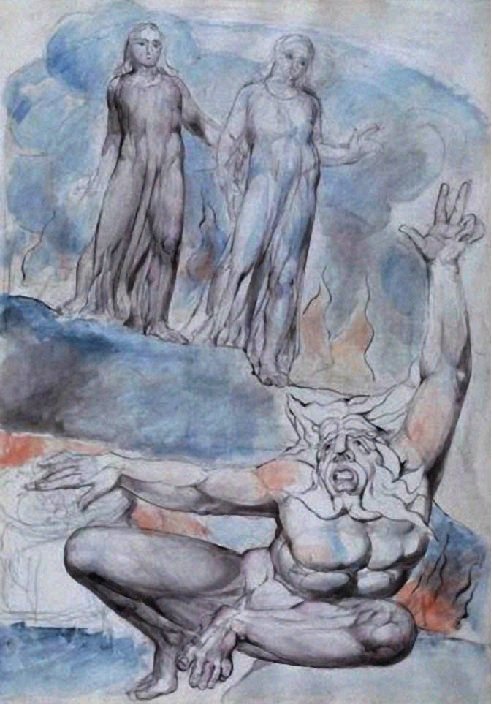 Here is the line in original "Italian":

And here is the line cut from an early 1487 edition of La Devina Commedia (It was first published in 1472, so this is quite an early printing, and thus it may be assumed it is quite authentic to Dante's initial choice of words for the line: 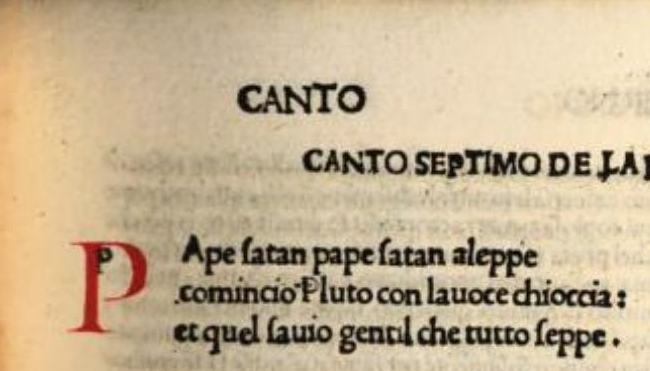 My only note on analyzing this early printing of the lines is the thought-provoking idea on why the "s" (a medial "s" in this printing) is not Capitalized. Why satan (ſatan) and not Satan? This at first might leave no interest-spurring idea to it, but once noticing that Pluto (the name "Plutus" was commonly used interchangeably with "Pluto"--even in Shakespeare's Julius Caesar) is indeed capitalized-- why not then Satan?

According to this article, breaking down the words to their earliest meanings could bring you to this understanding:

(1.) The word "papé" (or "pape") might be a rendering of Latin papae, or from Greek παπαί (papaí). Both words are interjections of anger or surprise, attested in ancient authors (comparable to the English "damn!", or just "oh!"). (2.) The word "aleppe" could be an Italian version of the word for "alef", the Hebrew letter א (a) (compare Phoenician alep and Greek alpha) The consonant shift here is comparable to that in Giuseppe, the Italian version of the name Joseph. In Hebrew, alef also means "number one" or "the origin that contains everything". It may also be interpreted as a metaphor for the "head", "the first and foremost". This was an attribute for God in late medieval expressions, meaning "the majesty" (of God). "Alef" was also a medieval interjection (like "Oh God!"). (3.) The word "Satan" comes from the Hebrew word הַשָׂטָן (ha-Satan), which translated literally means "the adversary". The meaning of the words then becomes, "Oh (papé), our foremost (aleppe) enemy of God/demon (ha-Satan), as aleppe is the first letter of the alphabet (aleppe)!", which is "Oh, Satan, o Satan, god, king!". Thus, the sentence would be a mixture of Greek and Latin.

But thereafter there is an exceptional amount of further theories coined by numerous schollers throughout the centuries of the Divine Comedy's fame. (see here under Possible Explanations)

My favorite of the explanations has always been the Hebrew Theory, as the contradiction to the words of The Christ and the blasphemy represented therein seems like something Satan would pleasure in quite luxuriously indeed:

Some commentators claim that the sentence is phonetic Hebrew, "Bab-e-sciatan, bab-e-sciatan, alep!". This would be the opposite of the sentence that Jesus spoke in the Gospel according to St Matthew 16:18, "...and the gates of Hell shall not prevail against it". The meaning of this utterance would be that Hell (Satan) has conquered. (Source: WIKIPEDIA)

Another intriguing translation is by Domenico Guerri who put forth a more simple understanding:

Here is another short essay on the subject of the line's ambiguity written quite delightfully. It may be found Here:

And speaking of that opening line: no one knows what the hell it means. It’s not Italian. It’s the fourteenth century equivalent of Nell-speak. (And God bless the poor sap who had to transcribe Jodie Foster’s gibberish for the closed-captioning. [typing]Gai’ainja! Gai’ainja! Tai tai, spay fo nay![/typing] “Dude, I’m out. I’m going to do something easier than this, like naming Pokemon monsters or writing speeches for Michele Bachman.”) The gist of it is: Plutus, the moster guarding the entrance to the Fourth Circle, is yelling something to the effect of “Get out of here, poet!” and Virgil is having none of it, so he defeats Plutus by chanting at him. (Taci, maladetto lupo!/consuma dentro te con la tua rabbia; “Silence, accursed wolf! Let your fury feed itself inside you.” And then, a little later, we’re told tal cadde a terra la fiera crudele; “so fell that cruel beast to the ground.”)

Lastly, here is a rather insightful footnote worth considering. Found Here:

Plutus, the god of wealth in classical myth, wishes to prevent the passage of this living soul through Satan's kingdom. That, at least, is what we must surmise from Virgil's reaction, vv. 4-6, which assuages Dante's fear. (...) Pape Satàn, Pape Satàn, aleppe. The third verse suggests that Virgil understands these words spoken by Plutus. If that is correct, he is perhaps the only one to have done so. Over the centuries a continuing debate addresses, rather confusedly, the precise nature of these five words: whether they are part of a recognizable language or not; whether they are totally meaningless or have some meaning; whether they are an invocation of the power of Satan against invading Dante or an oath giving expression to the monster's surprise at the presence of a living soul in hell. For a review of the question see Hollander (Dante and Paul's “five words with understanding,” Occasional Papers, No. 1, Center for Medieval and Early Renaissance Texts and Studies [Binghamton, NY: Medieval and Renaissance Texts and Studies, 1992]), who sees this and Nimrod's similarly nonsensical five words (Inf. XXXI.67) as parodic inversions of the five words of clear speech called for by St. Paul, concerned about the over-reliance of the faithful on speaking in tongues (I Corinthians 14:19). Plutus's oath may be garbled speech, but it does contain 'pseudo-words' that have meaning: Pape represents either a Latin interjection (papae) of admiration, as many ancient commentators think, or/and a debased form of the Italian and Latin for 'pope' (papa – see Inf. VII.47: papi); Satàn would fairly clearly seem to be a form of the Italian 'Satana' or of the Latin 'Sathanas' and thus 'Satan'; aleppe, as some of the first commentators noticed, is the Italian form of the Hebrew word for the first letter of the alphabet, 'aleph,' as in the Latin expression 'alpha ed omega' (the first and last letters of the Greek alphabet, signifying 'the beginning and the end'), as God defines Himself in the Bible (Apoc. 1:8, repeated at Apoc. 21:6 and Apoc. 22:13). If one had to render these nonsense words in English one might say something like 'O Pope Satan, my god.' Fortunately, one does not have to. For the connection of these words in mixed language to those in the first verses of the seventh canto of Paradiso (there, naturally, totally positive in tone and meaning) – the parallelism is certainly striking – see Gian Roberto Sarolli, Prolegomena alla “Divina Commedia” (Florence: Olschki, 1971), pp. 289-90. Lorenzo Renzi (“Un aspetto del plurilinguismo medievale: dalla lingua dei re magi a 'Papé satan aleppe,'” in Omaggio a Gianfranco Folena, ed. Pier Vincenzo Mengaldo [Padua: Editoriale Programma, 1993]), pp. 61-73, presents evidence for a possible connection between instances of glossalalia in French medieval plays, some of which come from the mouths of pagan deities, and Dante's polyglot phrase here and in Inferno XXXI.67.

Not the answer you're looking for? Browse other questions tagged meaning italian-literature dante-alighieri inferno or ask your own question.

11
What does “Until a man is nothing, God can make nothing out of him” mean?
5
Did Dante plagiarize the Divine Comedy from Kitab al-Miraj?
10
Dante Alleghieri's Divine Comedy "has been translated into the most languages in the world & top printed work after the Bible"?
5
What does Dante mean here?
3
What did Twain mean by the "Creedmoor aim"?
2
What does "even so did I" mean?
3
What is the context and origin of this Dante quote?
4
Where did Boccaccio refer to Dante's Comedia or Commedia as the Divine Comedy?
2
Translating into English two French phrases from "After Leaving Mr. Mackenzie"