The motif of Tom O' Bedlam

The 17th-century motif of Tom O' Bedlam has always been one that I hold much affection and wonder for (as can be assumed by the choice of username on my part.) The motif most famously makes an appearance in William Shakespeare's The Tragedie of King Lear; Here being two examples of the text spoken by Edgar:

(...)I will preserve myself, and am bethought To take the basest and most poorest shape That ever penury in contempt of man Brought near to beast. (...)Of Bedlam beggars, who with roaring voices (...)Sometime with lunatic bans, sometime with prayers, Enforce their charity. “Poor Turlygod!” “Poor Tom!”— That’s something yet. Edgar I nothing am.

Who gives anything to poor Tom? (...)Bless thy five wits! Tom's a-cold. O! do De, do de, do de. Bless thee from whirlwinds, Star-blasting, and taking! Do poor Tom some Charity(...)

And of course the masterfully written, anonymous ballad of "Tom O' Bedlam's song" which is certainly the magnum opus of the motif in use (assumed to have been written soemtime in the 1620s but first published in 1720) which the late-great literary critique Harold Bloom famously very much admired-- Here being my favorite part of the poem:

The Gypsies, Snap and Pedro,/ Are none of Tom's comradoes,/ The punk I scorn, and the cutpurse sworn/ And the roaring boy's bravadoes./ The meek, the white, the gentle,/ Me handle not nor spare not;/ But those that cross Tom Rynosseross/ Do what the panther dare not./ Although I sing, Any food, any feeding,/ Feeding, drink or clothing;/ Come dame or maid, be not afraid,/ Poor Tom will injure nothing./ 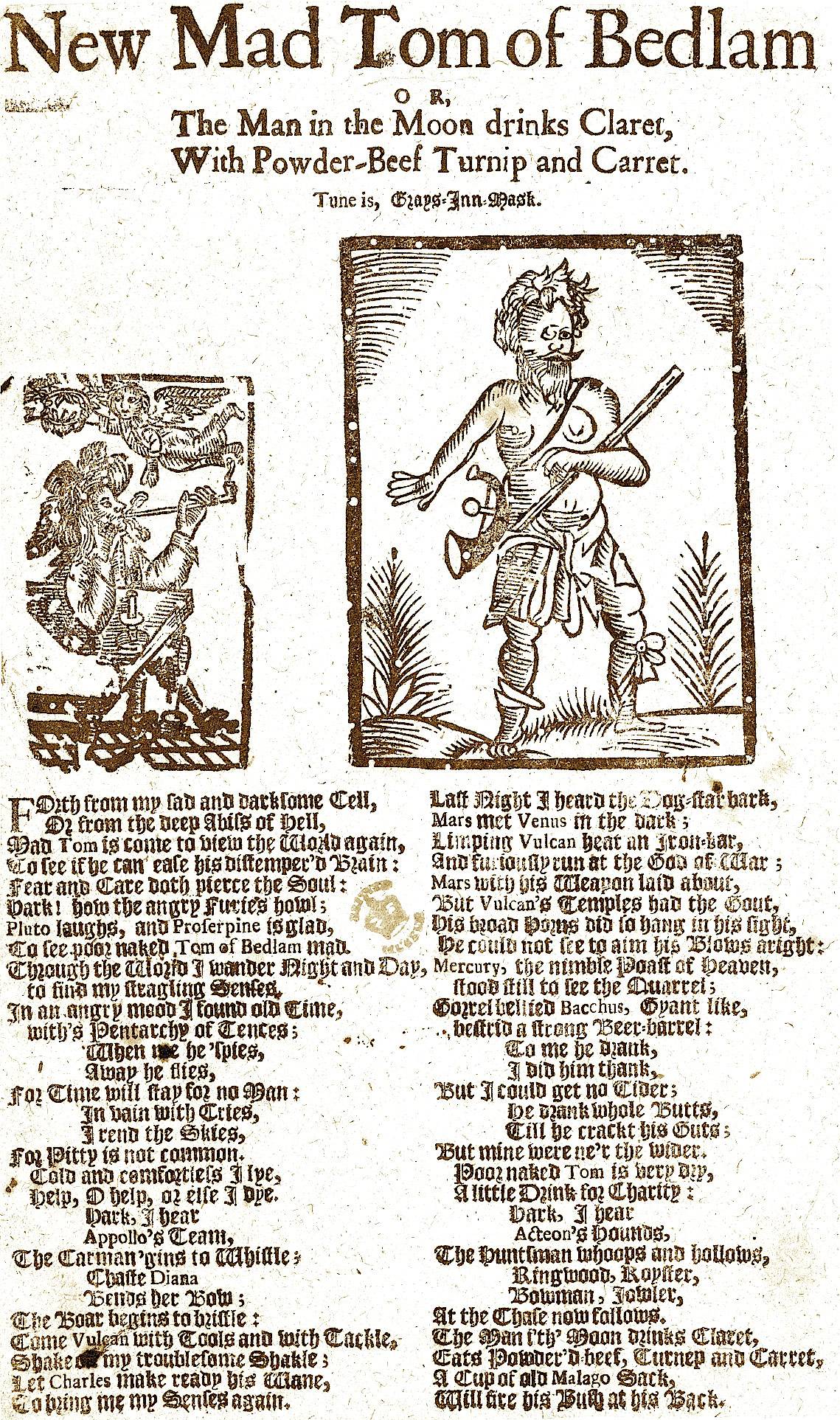 I distinctly recall reading about the origin of the concept of "Tom o' Bedlam" in numerous writings and remember that the concept of "Bedlam" may be a biblical allusion to The Christ's Bethlehem, and this biblical (albeit blasphemous) almost holy connotation to the madhouse of Bedlam corresponds pleasantly with the ancient belief that madman was in some way "divine" in their minds (Plato's Theia mania and what have you--See. Divine Madness)

Not to forget there were numerous uses of the word "Tom" in the context of a "Madman" or "fool" (see. "tom-fool" defined as a "buffoon, clown," circa. 1640s) and according to Online Etymology Dictionary the word Bedlam comes from:

"Hospital of Saint Mary of Bethlehem" in London, founded 1247 as a priory, mentioned as a hospital 1330 and as a lunatic hospital 1402; it was converted to a civic lunatic asylum on dissolution of the monasteries in 1547. It was spelled Bedlem in a will from 1418, and Betleem is recorded as a spelling of Bethlehem in Judea from 971.

My question has numerous sections all relating to the topic of "Tom O' Bedlam":

Any insight would be humbly appreciated. Thank you so very much.

Browse other questions tagged meaning poetry william-shakespeare motif or ask your own question.

16
Why is the hero's journey so ubiquitous across world literature?
3
Tom and Nick's meeting in the Great Gatsby
5
In the Sonnet 29 by Shakespeare, does the speaker pity himself over lack of skill as an artist or contentment?
0
Why is the painful deflowering of a virgin motif in romance novels so common?
2
What is the meaning of the poem “Praxis” by Wendy Xu?
5
What is the oldest mention of a unicorn in English literature?
12
What's the meaning of “give someone the lie” in Macbeth?
6
What's the meaning of Tom Bombadil's poem?
7
Who introduced the sonnet to English literature? Wyatt or Shakespeare?