From Finnegans Wake, What is the meaning of this word? In context:

The fall (bababadalgharaghtakamminarronnkonnbronntonnerronntuonnthunntrovarrhounawnskawntoohoohoordenenthur- nuk!) of a once wallstrait oldparr is retaled early in bed and later on life down through all christian minstrelsy. The great fall of the offwall entailed at such short notice the pftjschute of Finnegan, erse solid man, that the humptyhillhead of humself prumptly sends an unquiring one well to the west in quest of his tumptytumtoes: and their upturnpikepointandplace is at the knock out in the park where oranges have been laid to rust upon the green since devlinsfirst loved livvy.

It's a nonce word and is used only in Finnegans Wake. I have no clue why Joyce made it so long (perhaps he wanted to catch readers' attention and persuade them to read Finnegans Wake). It's defined by Your Dictionary as:

A sound which represents the symbolic thunderclap associated with the fall of Adam and Eve.

About it's origin, YourDictionary says:

A coinage from Finnegans Wake author James Joyce said to represent the thunderclap associated with the fall of Adam and Eve. The word is a hybrid of words in many languages that relate to thunder.

Joyce uses the word Bababadalgharaghtakamminarronnkonnbronntonnerronntuonnthunntrovarrhounawnskawntoohoohoordenenthurnuk, which is meant to denote the symbolic thunderclap which accompanied the Fall of Adam and Eve (a meaning that is imbued with greater significance in light of Joyce’s lifelong fear of thunder).

It is a 101-letter word that depicts the word for thunder in various languages. There's a video on Adam Harvey's YouTube channel where he pronounces it himself and explains how to pronounce it.
He breaks it down into its constituent parts and explains what each word means and where it came from.

Here's the summary of his explanation:

It took me a while to transcribe in the IPA how Adam Harvey pronounced it, though I'm still sceptical about my transcription:

It's also explained in Annotations to Finnegans Wake by Roland McHugh (Google Books). Each word is explained at Finnegans Web.

The same explanation can also be found at Fweet.org: 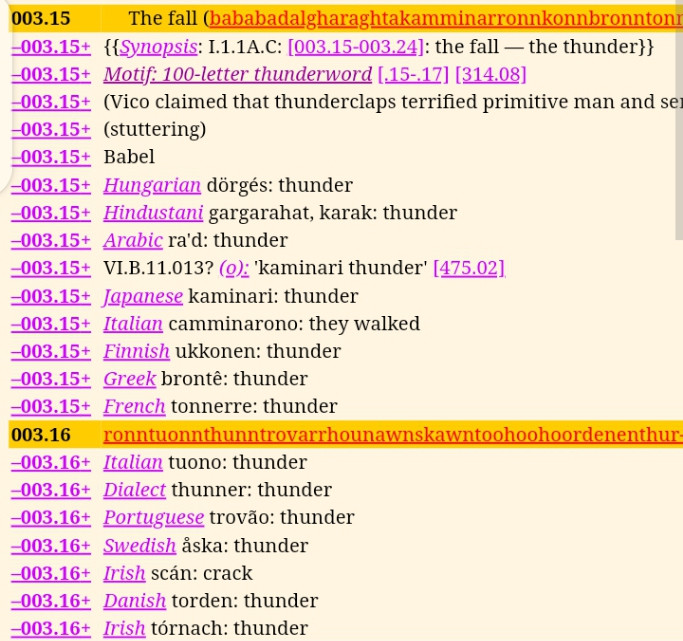 Faction Paradox Wiki has also used it to refer to the blaring sound of a warship (I guess):

The Bababadalgharaghtakamminarronnkonnbronntonnerronntuonnthunntrovarrhounawnskawntoohoohoordenenthurnuk warships (also called planet-killer warships) were piloted by praxis-enabled posthumans from the Pilots' Coterie. The name came from James Joyce's Finnegans Wake, where it meant "a thunderclap so loud that it symbolises the Fall of Eden"....

There are 100+ pronunciations of this word (by people from different countries) on Pronounce Kiwi.

Anyways back to your question: It is a biblical word coined in James Joyce's Finnegans Wake which is widely regarded as being an exceedingly difficult and tormenting book to get through (as is expected from Joyce). Joyce wrote it periodically during a term of seventeen years and it is fittingly considered Joyce's final work (published a little more than a year before his untimely death). I very humbly read it once and find it exceptionally tragic that it is so neglected in the minds' of readers, especially absurdists–to an absurdist, this is the stuff that dreams are made on!–It is a very strange masterpiece indeed (as is expected with Joyce) and I find it quite honorable that such a strange book holds in its pages one of the equally strange and divinely profound words.

The word is defined as the great thunder-crack (metaphorically) which strikes the hour that Satan triumphed, and God's masterstrokes: Adam and Eve face their "paradise lost" fall from grace condemnation.

The word is considered to be "unpronounceable" but I would adore seeing someone give the word some serious thought and try to come up with something.

Here is the passage where the word appears in Joyce's Finnegans Wake:

The fall (bababadalgharaghtakamminarronnkonnbronntonnerronntuonnthunntrovarrhounawnskawntoohoohoordenenthur — nuk!) of a once wallstrait oldparr is retaled early in bed and later on life down through all christian minstrelsy.

In context, this refers to a very simple biblical allusion, Joyce is comparing the situation with the great fall from grace of Adam and Eve.-- thus spoke as "The Fall".

12
Meaning of this William Faulkner quote
4
Does "egourge" in Finnegans Wake derive from the Greek "egoourgos" meaning "worker for the self"?
1
meaning of 'dash about'
2
meaning of "mind-twisting"
2
"promising with" meaning
1
Meaning of "Its surfaces were dull with the absence of meaning."
0
Meaning of "trembling fantasies"