What does Edith Wharton mean by "democratic principles" in The Age of Innocence?

I'm only two paragraphs in with The Age of Innocence and already I'm having trouble, specifically with this sentence:

To come to the opera in a Brown coupé was almost as honourable a way of arriving as in one's own carriage; and departure by the same means had the immense advantage of enabling one (with a playful allusion to democratic principles) to scramble into the first Brown conveyance in the line, instead of waiting till the cold-and-gin congested nose of one's own coachman gleamed under the portico of the Academy.

What does "democratic principles" refer to here? How exactly do democratic ideas come into play in this context?

Edith Wharton was writing in 1919-20, using intentionally flowery and high-flown language. It is understandably a tough read for modern readers. Don't worry if you find it difficult. Everyone does. Her cultural references are old and obscure enough to stump most people who are not familiar with the time (NYC in the 1870s). After all, we are no longer innocent.

Immediately before this passage:

It was Madame Nilsson’s first appearance that winter, and what the daily press had already learned to describe as “an exceptionally brilliant audience” had gathered to hear her, transported through the slippery, snowy streets in private broughams, in the spacious family landau, or in the humbler but more convenient “Brown coupe”.

From earlier paragraphs we already now the opera Faust is on and Christine Nilsson is performing. And that draws throngs of people to the Academy of Music in New York City. This line tells us people go to the Academy in various modes of transportation despite the snowy and slippery streets. They can go in their private broughams, or in spacious landaus, or in Brown coupes. First let's get the terminology and historical context out of the way.

A brougham was a type of small carriage used before the advent of the automobile. It is not to be confused with the brougham car body style which borrowed its name and shared design and stylistic similarities.

A brougham (pronounced "broom" or "brohm") was a light, four-wheeled horse-drawn carriage built in the 19th century. It was named after the politician and jurist Lord Brougham, who had this type of carriage built to his specification by London coachbuilder Robinson & Cook in 1838 or 1839. It had an enclosed body with two doors, like the rear section of a coach; it sat two, sometimes with an extra pair of fold-away seats in the front corners, and with a box seat in front for the driver and a footman or passenger. Unlike a coach, the carriage had a glazed front window, so that the occupants could see forward. The forewheels were capable of turning sharply. A variant, called a brougham-landaulet, had a top collapsible from the rear doors backward.

Landau was a bigger carriage, hence "spacious". Not to be confused with the eponymous automobile design.

A landau is a coachbuilding term for a type of four-wheeled, convertible carriage. It was a city carriage of luxury type. The low shell of the landau provides maximal visibility of the occupants and their clothing, a feature that makes a landau still a popular choice for the Lord Mayors of certain cities in the United Kingdom on ceremonial occasions.

Similarly the Brown coupe was also a kind of light carriage. And today's two door cars of course borrow their name from the historic carriage.

Coupé, also spelled Coupe, four-wheeled, horse-drawn carriage that was based on the coach but was smaller and lighter in weight. While originally the word coupé described any cut-down coach body, it later became associated with a specific type of truncated coach body that came into general use in western Europe and America in the mid-18th century. A coupé usually contained one enclosed seat for two passengers and a higher, outside seat for a driver, although the largest model, the clarence, had two enclosed seats and accommodated four passengers. In the 20th century the name was given to the closed, two-door, two-passenger automobile.

This is a coupe: 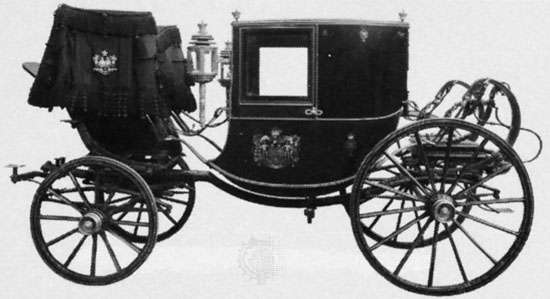 The capitalization of "Brown" signifies it is either a carriage service for hire for people who don't own their own transportation or manufactured by a company called Brown. Either way, it is a relatively cheap mode of transport. Theatergoing plays a crucial role back in the day with enormous social significance. The elite class don't go to the theater to enjoy the opera but to be seen in a display of wealth. The mode of transport a family arrives in shows their financial means and social status. A brougham is a voguish and flashy vehicle, like a sports car in today's world; a landau a family car; a Brown coupe an entry level economy car.

"Democratic principles" here alludes to the fact that despite the social stratification, people who take the Brown coupe will get in their transportation first. "Democratic" in the sense that rich people who have their own Brougham or Landau don't necessarily cut to the front of the line; they have to wait. Wharton is being jocular with her words.

The landau and brougham are privately owned cars with a driver, but the Brown coupé refers to a taxi for hire. To understand the sentence, think about the experience of leaving a packed event in an Uber or Lyft as opposed to a taxi. With Uber, you have to wait for your driver, whereas with a taxi, you just get in line and hop into the next one. If you’ve ever been in such a situation, you’ll know that the Uber area can be a crowded, disorganized disaster. People are walking back and forth looking for their designated rides; drivers are idling and looking for their passengers, blocking other traffic; sometimes your own car doesn’t arrive for a really long time, so people who arrived later than you get to leave before you. In contrast, the taxi line is efficient, with a strict first-in, first-out structure, where two people who arrive at about the same time will wait for about the same amount of time.

The “democratic principle” is that everyone’s the same. No one gets to jump the line regardless of their wealth or status. This is an early allusion to the themes of wealth and social class found throughout the book.

Not the answer you're looking for? Browse other questions tagged meaning edith-wharton the-age-of-innocence or ask your own question.