Why do many Korean folk tales start with "back when tigers smoked"?

I've read in a few sources that the Korean equivalent of the "once upon a time ..." which often begins English folk stories is something like "back when tigers smoked ..." or "when tigers used to smoke ..."

Why has this become a standard way to start Korean folk stories? What is the historical and cultural significance of tigers smoking, or what does this refer to?

That went a lot further down the rabbit-hole than I expected. There doesn't seem to be a lot of agreement on the origin of the phrase. It wouldn't seem like it would be a very old reference, since tobacco was introduced to Korea in the early 1600s. This Reddit post claims that it comes from an earlier phrase about eating the tobacco and might actually have originally been referencing catnip. Overall, I've found two main theories. First, it may have simply been an indication of a highly fictional story, since obviously tigers don't smoke normally. Secondly, some people tie it directly to a kind of democracy and liberty. When tobacco was initially introduced to Korea, practically everyone smoked, and it was considered medicinal, but during the Joseon period, it became a practice restricted to the aristocrats, smoked in absurdly long pipes that required servants to light the pipe from the other end. Invoking tigers (part of Korea's mythological tale of how the nation came to be) smoking invokes an idea of when everyone was equal, even humans and animals. For example, from the previously mention Reddit Post:

While it is often said "back when tiger used to smoke" to denote something that happened ages ago as in myths and legends. If you want to get real technical about it. Tabbacco didn't enter Korea until 1618. There are lot of articles mentioning it wasn't originally back when tigers 'smoked' but 'ate' as in ate catnip. A different article points out that the reason why back when tiger used to smoke is because according to "Hamel's Journal and a Description of the Kingdom of Korea, 1653-1666" everybody regardless age and gender would smoke in Korea. Until it started getting class restricted and lower class was no longer allowed to smoke infront of higher classes. So, according to this theory phrase is refering to back when equality still existed. Whatever the case, I think it's a cool phrase regardless.

Lastly, the saying has an additional layer of meaning now because wild tigers are extinct in South Korea (North Korea claims to still have them), killed off in the early 20th century by hunters and the occupying Japanese.

Note
As mentioned in the comments, a challenge was posted contesting the content of this answer. I answered the challenge with multiple real-world usages and the alleged origins of the expression. I'm linking it here as it serves as a further elaboration of this answer.

I want to add a counteranswer here, not because I think Sean's answer is wrong, but because it's a literary device used more broadly than just in Korean folklore.

To that end, there needn't be a reference to tigers smoking. Some cultural usages cannot be traced other than noting them coming into use. I cannot find any explicit reference on the origins of the Korean tiger-smoking phrase.

In (Flemish) Dutch, a similar turn of phrase is used, translating to "back when animals still spoke".

I don't quite agree that there should be a specific reference, or that facts about the introduction of tobacco are relevant to the literary device itself. The Dutch variant makes it clearer that the intention is not to point to a factually accurate period in the past, but rather to paint the picture of a completely different world which has no relation to the one we (the narrator and reader/listener) are in, so the reader/listener doesn't bother trying to find connections that aren't there. 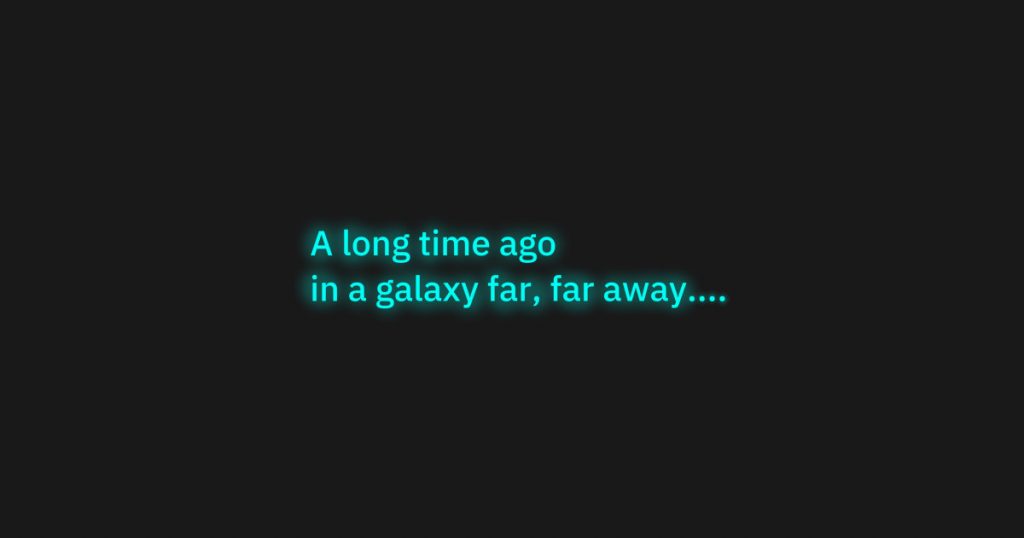 This loosely translated to "The following story is entirely unrelated to our current world, don't bother looking for connections to it." It encapsulates the story in a world of its own and suggests to the viewer that it should be viewed as such.

One of the main reasons that Star Wars needed to do so is because there is a race of humans, but they are not the humans who once lived on Earth. There is no Earth, there is no reason to think that there is a backstory related to Earth or human origins, and it needs to be made clear to the viewer that this line of thinking is not relevant to follow the story.

In all mentioned cases (Korean, Dutch, Star Wars), the intention is to very quickly get the reader/listener to stop looking for real-world references and instead focus on the story at hand, since this world/time period is clearly not our own.

Comparatively, "once upon a time" is much less explicit about there being no real-world connections. It doesn't actually restrict the possibility that we're telling a story that is grounded in the real world, though it is generally inferred to introduce a story that isn't.

when Koreans say "back when tigers smoked," this is kind of the equivalent of Americans saying "long ago, when dinosaurs used to roam the Earth" except that dinosaurs actually existed and we're not sure if tigers ever smoked. It just means to say that it was a very long ago. A lot of Korean folktales have to do with tigers if you have noticed. There is such a tale of the grandmother and the tiger, the tiger and the persimmon, yin and yang, etc. because the tiger is representative of Korean identity and culture throughout history. It does not really have any deep meaning between a tiger and tobacco smoking

Not the answer you're looking for? Browse other questions tagged cultural-context folk-tales korean-literature or ask your own question.

3
What is the evidence that Flemish fables or fairy tales began with the words “back when the animals could still speak”?

26
When and why did the Brothers Grimm start collecting fairy tales?
4
Why are so many fairy tales so similar?
3
What is the evidence that Flemish fables or fairy tales began with the words “back when the animals could still speak”?