Meaning of “interrupted spirals, inverted cones and broken cylinders” in “The Worst Crime in the World”?

In "The Worst Crime in the World" by G. K. Chesterton, the author was saying in its beginning:

FATHER BROWN was wandering through a picture gallery with an expression that suggested that he had not come there to look at the pictures. Indeed, he did not want to look at the pictures, though he liked pictures well enough. Not that there was anything immoral or improper about those highly modern pictorial designs. He would indeed be of an inflammable temperament who was stirred to any of the more pagan passions by the display of interrupted spirals, inverted cones and broken cylinders with which the art of the future inspired or menaced mankind.

What's meant by these obscure geometrical shapes, and what's the whole meaning of that sentence?

Tsundoku's answer explains the meaning in context of the geometric objects referred to, but the structure of the whole sentence is a bit confusing too:

He would indeed be of an inflammable temperament who was stirred to any of the more pagan passions by the display of interrupted spirals, inverted cones and broken cylinders with which the art of the future inspired or menaced mankind.

"He" in this sentence does not refer to the specific man in the preceding sentences, Father Brown. This is a more general statement: read "He ... who was stirred" as the subject of the main verb "would indeed be". Rephrasing in a more easy-to-understand order:

Anyone who was stirred to any of the more pagan passions by [modern art] would indeed be of an inflammable temperament.

In other words, it is ridiculous to suppose that Father Brown was offended or outraged by the display of geometric modern art (as described by Tsundoku).

The only part I can't quite get is "pagan passions". Presumably this is an old-fashioned way of referring to emotions such as anger, from a Christian point of view, but not one I've come across before or can find in phrase dictionaries.
share | improve this answer | |
answered Jun 9 at 21:26

"The Worst Crime in the World" was published in 1927 in the collection The Secret of Father Brown. At that time, cubism was roughly 20 years old. Some cubist painters depicted human bodies as made up of geometric shapes such as cones and cylinders.

One can see examples of this in Marcel Duchamp's Nude Descending a Staircase, No. 2 (1912), below: 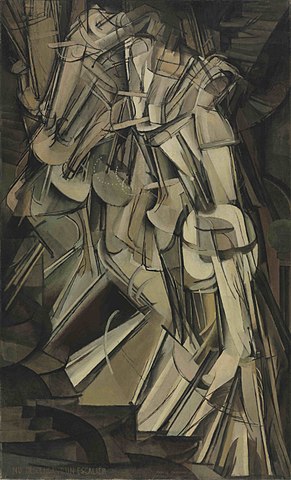 Another example is Fernand Léger's Soldier with a pipe (1916), below: 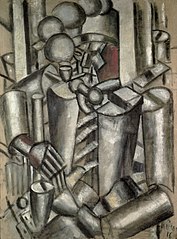 Not everybody appreciated this type of art. For example, Duchamp's "Nude Descending a Staircase, No. 2" was quickly parodied. To those who preferred more traditional styles of painting or who thought that art should represent beauty, cubism, cubo-futurism and other styles that broke with traditional aesthetics may have looked ugly and unpleasant, and therefore even menacing.

Not the answer you're looking for? Browse other questions tagged meaning short-stories g-k-chesterton father-brown or ask your own question.