What is the meaning of this sentence by H.G. Wells about a "liberal heathen deity"?

Here is the paragraph it's in:

Captain Gerilleau, who was Holroyd's sole distraction from these physical distresses, developed into a formidable bore, telling the simple story of his heart's affections day by day, a string of anonymous women, as if he was telling beads. Sometimes he suggested sport, and they shot at alligators, and at rare intervals they came to human aggregations in the waste of trees, and stayed for a day or so, and drank and sat about, and, one night, danced with Creole girls, who found Holroyd's poor elements of Spanish, without either past tense or future, amply sufficient for their purposes. But these were mere luminous chinks in the long grey passage of the streaming river, up which the throbbing engines beat. A certain liberal heathen deity, in the shape of a demi-john, held seductive court aft, and, it is probable, forward.

I especially didn't understand the second part of the sentence:

held seductive court aft, and, it is probable, forward.

But if anyone can simplify the whole sentence for me, it'll be much appreciated.

The key to extracting the true meaning of this sentence is the word "demi-john", which means a large bottle commonly used for alcohol: 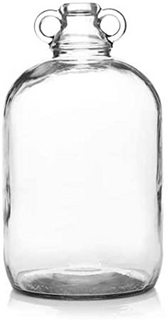 Given this context, it seems that the "liberal heathen deity" is the ancient Graeco-Roman god Dionysus or Bacchus, the god of wine and winemaking, often associated even in much later centuries with drunkenness and revelry. Here "heathen" is used to refer to the religion of the ancient Greeks and Romans, as opposed to Christianity and other Abrahamic religions.

So, this sentence describes Bacchus, "in the shape of a demi-john", presiding over some sort of drinking party. It is this ancient god, referred to metaphorically, who "held court" (presided), the adjective "seductive" being added perhaps to describe the addictive nature of alcoholism.

What about "aft" and "forward"? These refer metaphorically to the different classes of seamen aboard the ship. It was common to refer to the ordinary sailors as those before the mast or "forecastle hands", according to where they had their quarters, while the senior officers would typically be stationed towards the rear of the ship. The terms aft and forward, in naval slang, refer to the back and front parts of the ship respectively.

So, as kimchi lover said in a comment, the real meaning of the quoted sentence could be condensed as:

The officers drank, and probably the other ranks did too.

Not the answer you're looking for? Browse other questions tagged meaning short-stories h-g-wells or ask your own question.