How can a “desk” be considered a secret keeper?

I was reading Hamlet, Act II, scene 2, when I encountered the following lines:

.....what might you,
Or my dear majesty your queen here, think,
If I had play'd the desk or table-book,
Or given my heart a winking, mute and dumb....

Now, this site glosses this as:

if I had shown myself of no more intelligence than a desk or memorandum-book (which have secrets committed to their keeping, but no power to take any action regarding those secrets).

My question is how can a "desk" be a secret keeper?

To Adriana, villain, hie thee straight:
Give her this key, and tell her, in the desk
That's cover'd o'er with Turkish tapestry,
There is a purse of ducats; let her send it:

This suggests that "desk" refers to a type of furniture where you can store things and that you can lock with a key. Because of this, it can also be used for storing things that the owner wants to keep secret.

Wikimedia has the following image of Henry VIII's writing box: 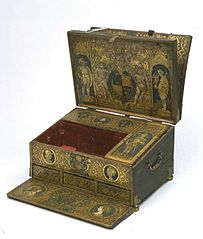 In the cited passage from Hamlet, Polonius asks Claudius what he (the king) might have thought of him if he had kept his knowledge about Hamlet's and Ophelia's relationship to himself (instead of telling Ophelia she should avoid prince Hamlet).

Not the answer you're looking for? Browse other questions tagged meaning william-shakespeare hamlet or ask your own question.

7
How do Hamlet's thoughts and doubts about the afterlife affect him?
6
How can readers ascertain that they have identified the author's intent?
3
In Early Modern English, how did 'see' semantically shift to mean 'note/record'?
7
Where and how did James Joyce condemn Hamlet as a failure?
7
How can we reconcile the bareness of Shakespearean stages with the complex stage directions of The Tempest?
4
Meaning of “ethical fellowship” in “The Secret of Father Brown”?
5
In “Paradise Lost”, how can a fleet of ships “hang in the clouds”?