Did Swift really say, ‘Puns are disliked by none but those who can't make them’?

A recent question asked about the source of a quote about puns attributed to Edgar Allen Poe. @Rand al'Thor found out that the quote could be found in Poe's marginalia but that the idea was older. @Mithical then found a similar quote attributed to Jonathan Swift:

Puns are disliked by none but those who can't make them.

This is quoted in a letter to the editor(s) of the magazine The Monthly Mirror in July 1807. However, the quote does not come from the fragment attributed to Swift that follows the letter.

I have found that Swift worked on a text entitled The Art of Punning (in an 1808 edition of his work that can be consulted on Archive.org) but that text, nor the volume in which it was published appear to contain the quote mentioned above.

So did Jonathan Swift really say or write this, or is this yet another example of misattributed quotations?

It looks like it did come from Swift, albeit not quite in those exact words.

In "The Works of Dr. Jonathan Swift ...: Accurately Revised ... Adorned with Copper-plates; with Some Account of the Author's Life, and Notes Historical and Explanatory, Volume 1", published in 1754 according to Google, written by John Hawkesworth, it says: 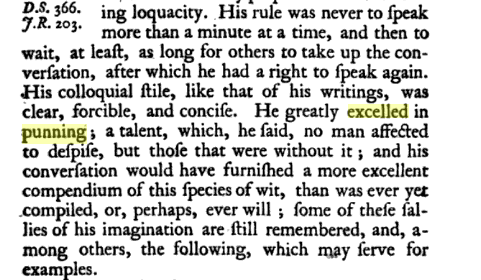 His rule was never to speak more than a minute at a time, and then to wait, at least, as long for others to take up the conversation, after which he had a right to speak again. His colloquial stile, like that of his writings, was clear, forcible, and concise. He greatly excelled in punning; a talent, which, he said, no man affected to despise, but those who were without it; and his conversation would have furnished a more excellent compendium of this species of wit, than was ever yet compiled, or, perhaps, ever will; some of these sallies of his imagination are still remembered, and among others, the following, which may serve for examples.
(emphasis added)

This was the earliest example I was able to find of any version of this quote, searching Google Books for works restricted to before 1807, trying various combinations of words such as "punning".

In conclusion (after three questions): It looks like Swift did use to say this, but didn't write it down; it was later written down and attributed to him, but then changed wording over the years.

Not the answer you're looking for? Browse other questions tagged quote-source jonathan-swift or ask your own question.