What does Dupin mean about a seal formed of bread?

In Edgar Allan Poe's short story "The Purloined Letter", a minister known only as D-- has a letter which he is keeping for the purposes of blackmail, and the police prefect G-- comes to Dupin for help in finding and retrieving it. Dupin succeeds in doing so, knowing D-- well enough to figure out where he hid the letter (in plain sight), and recovering it by means of a ruse:

D-- rushed to a casement, threw it open, and looked out. In the meantime, I stepped to the card-rack, took the letter, put it in my pocket, and replaced it by a fac-simile, (so far as regards externals,) which I had carefully prepared at my lodgings; imitating the D-- cipher, very readily, by means of a seal formed of bread.

What does it mean to "imitate [a cipher] by means of a seal formed of bread"? How could he do this?

short-stories edgar-allan-poe
Share
Improve this question
asked May 3 '20 at 8:32

Leaving to @Mithical's answer the matter of the pun, this is the ‘more boring answer’ about making of a seal with bread which makes the pun possible:

While the thing adhering to the letter to keep it closed is called a seal, it should be noted that the object used to impress the design on the wax can also be called a seal. Per the OED:

An engraved stamp of metal or other hard material used to make an impression upon wax, etc. affixed as a ‘seal’.

There is no reason to suppose that Dupin would not have sealing wax of his own at his disposal in his lodgings, or readily be able to obtain wax in the correct colour. What is wanting is the device representing the D── cipher with which to impress the wax.

As @PeterLeFanuLumsdaine points out, bread can be kneaded back to a more dough-like consistency, although it lacks the springiness of unbaked gluten. Depending on the nature of the bread one may not even need to add moisture to get a cohesive lump. Once such a lump has been obtained it could, feasibly, be sculpted into an imitation of the required sealing stamp.

In practical terms I can imagine that one might use the play-doh type substance over the top of one's own seal, or over a coin or button of appropriate size to give it the required rigidity for use, and perhaps coat the face with something to help it release cleanly from the wax. I wondered about lamp oil, but thought the scent might be too obvious, possibly black ink would work as an easing agent, and not be conspicuous on the black sealing wax required to emulate D──'s own seal.

Sealing wax is extremely soft at the moment one impresses it, setting quickly afterwards. The wax does not rely on the pressure of the stamping for its adhesion to the letter. A blob of sealing wax or a wafer[a] can be used between the layers of paper for the primary seal. The impressed wax seal then performs its primary function of identifying the missive as a genuine communication from the sender, although it also contributes to detection of tampering. A bread-play-doh stamp should easily be firmer than the wax, which is all that is needed to create the impression. It only needs to be robust enough to survive a single use.

To be clear, I’m not suggesting that this is something that was ever really done, or would work well enough to fool anyone. But I’m think it works just well enough to service the de pain/Dupin pun. If I’d had need to furnish a temporary stamp in my lodgings, I’d have carved it out of soap.

Edit: I present my proof of concept for the bread seal! Made with nothing but an M&S naan and a red tea light, with a little olive oil as releasing agent. Not perfect but the principle is proved I think. 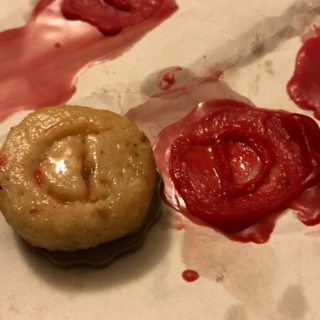 [a]A small disk of flour mixed with gum and non-poisonous colouring matter, or of gelatine or the like similarly coloured, which when moistened is used for sealing letters, attaching papers, or receiving the impression of a seal.

It's part of an elaborate set of puns. Shosuke Kinugawa, in the paper "Taking Yet Mistaking: Puns in “The Purloined Letter”" explains it like this:

There are six interrelated puns here. First is the triple pun on the phrase “D── cipher.” First and foremost it is a pun on the word “decipher,” suggesting “very conspicuously” that the reader must decipher something. The imperative to decipher the “D── cipher” then suggests that the “cipher” (monogram) of “D── ” is also a “cipher” in the sense of a cryptogram. So then “D── cipher” reads: decipher the “D── ” cipher (monogram) as a cipher (cryptogram). The other two puns are related to the material of which Dupinʼs replica of the D── cipher is made: bread. As Servanne Woodward notes, the bread is a pun on Dupinʼs last name (42). In French, “bread” is “pain,” and “of” is “de.” So a seal formed of bread is a seal formed “de pain” (pronounced “du pan”), and thus the seal “of Dupin.” In other words, the seal of D── is also Dupinʼs seal in that it is made of material that signifies “Dupin.”
(emphasis added)

So the "bread" is there purely to form a bilingual pun with the name "Dupin", and is part of a host of other puns that Poe included in the text.

Apparently, Poe loved puns, although I'm having trouble pulling up examples of this literary device in other Poe works.

Not the answer you're looking for? Browse other questions tagged short-stories edgar-allan-poe or ask your own question.

17
What does 'Gilead' mean in The Raven?
2
What is the meaning of this sentence: ...for there was nearly half as much of the entertaining as of the contemptible about the man
7
What is the significance of "half past two" in Wolfgang Borchert's The Clock and The Bread?
4
What does this passage mean about third-class passengers in the Madras-Bangalore Express?
4
What does Hanns Heinz Ewers mean in this quote about Edgar Allan Poe?
4
Does "entertain about" mean "distract about" or "entertain because"?
1
What does Edgar Allan Poe mean by "supererogation is not presumable of any Divine Act"?
1
What does "half-primitive vigor" mean?
2
What does ‘Kung mapatay di madeadball ’ mean?
4
What does "perverse madonna" mean?