Is Snoopy a telepath?

So throughout the comic strip Peanuts by Charles Schulz, Snoopy has been seen doing a fair number of ... shall we say unusual activities. These range from being a WWI Flying Ace, to his obsession with chocolate-chipped cookies (and how he's completely unfazed by the effects), to even writing (albeit terrible) short stories.
His most intriguing characteristic, however, is his uncanny ability to communicate with all forms and levels of life, including cats (like the cat next door), birds (Woodstock and his friends, he's a beagle scout master), and most importantly, other characters such as Charlie Brown, Lucy, Linus, and pretty much everyone else. More impressively, however, it's not that Snoopy merely understands the other characters, but the other characters seem to understand him too. 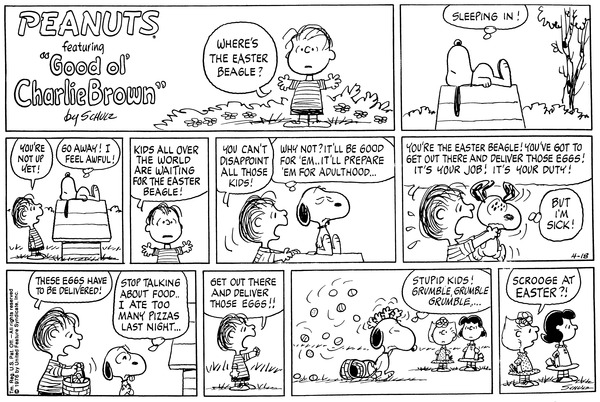 So how does he do it? Is there like a canonical answer/explanation to this phenomenon?

First, let's establish the fact that Snoopy doesn't ever talk. In the book My Life with Charlie Brown (Schulz Family Intellectual Property Trust, 2010), there's a chapter whose very title is, "What Do You Do with a Dog That Doesn't Talk?" In it, Schulz says,

Snoopy doesn't even talk. In the strip he communicates by means of thought balloons.

If you study the strip carefully, you'll find that there seem to be exceptions to the "thought balloon" rule—e.g., on 13 Jan 1963 and 22 Feb 1955—but these seem to be inadvertent errors. There are also ambiguous cases where Snoopy is singing (16 Dec 1962, 6 Jul 1971) or barking (23 Dec 1989) but I think these are just meant to indicate that Snoopy is making some audible sound, not actually speaking words. The one unambiguous case of Snoopy speaking (4 Apr 1952) is in a dream. So I think we can safely assume that Snoopy never talks.

Okay, but can Snoopy communicate telepathically? In earlier years, Schulz felt pretty strongly that the answer should be no. There are some illuminating remarks in Peanuts Jubilee: My Life and Art with Charlie Brown and Others (Penguin Books, 1975). On page 97, writing about his failed experiment with Frieda's cat Faron, Schulz writes:

The cat and the dog could not talk to each other because Snoopy never talks, he only thinks. So I would have had to show the cat and dog thinking to each other, which was totally unreasonable.

Indeed, Faron is totally silent, without even any thought balloons (though in the 24 May 1961 strip, Snoopy wonders, "What do you say to cats?"). But a few pages later, Schulz explains how, when Woodstock started to become a major character, he made a concession to allow telepathy in one direction (although he insisted on audible communication in the other direction):

A problem similar to that of the cat has now come about, and I have had to back off slightly. I would much prefer that Snoopy not communicate with Woodstock, but there are some ideas that are too important to abandon, so I have him speaking to Woodstock through "thought" balloons. I've held fast with Woodstock's means of communication, though it has been tempting at times to have him talk.

Schulz doesn't use the word "telepathy" here, but there's no question that Woodstock (and the other birds in the strip) can read Snoopy's thoughts directly. For an extreme example, on 11 Aug 1979, Snoopy thinks, 'In the 1926 version of "Beau Geste," Ronald Colman played Beau…who played Digby and who played John?' Olivier answers, 'Neil Hamilton and Ralph Forbes!'

However, despite allowing Woodstock to read Snoopy's mind, for a long time, Schulz resisted having Snoopy telepathically communicate with his siblings. For example, when Snoopy's brother Spike was first introduced into the strip in 1975, Spike was totally silent. Even as late as 18 Aug 1979, in a gag which demanded verbal communication between Snoopy and Spike, Schulz avoided having Spike explicitly "think to Snoopy." Eventually, though, when Schulz wanted Snoopy's siblings to play a larger role in the strip, he gave up all pretense and had them explicitly communicating telepathically. For example, on 8 May 1981, Snoopy thinks, "Hey, what happened to all the doughnuts?" and his sister Belle thinks, "You ate them!" Similarly, on 30 Sep 1982, when Snoopy reunites with his brother Marbles, Marbles thinks, "How've you been?" and Snoopy thinks, "Fine..how have you been?"

What about Snoopy communicating with the kids? Well, Schulz is usually careful to ensure that the kids aren't literally reading Snoopy's mind. For example, in the two strips you cite, if you read them very carefully, you'll see that at no point do the kids have to "hear" exactly what Snoopy is thinking; conceivably, they could be just making plausible inferences from careful observation of Snoopy's behavior. Schulz comments on this in his 1997 Comics Journal interview with Gary Groth (reprinted in Charles M. Schulz: Conversations, University Press of Mississippi, 2000).

Now, in my strip, Snoopy never talks to the kids. You'll notice that. And the birds never talk to them. They think to each other. The animals do, but the kids somehow are aware of what he is doing without actually knowing what he is really thinking. And they accept that, because I suppose we could say children live different lives.

I believe that that is as close as you'll ever get to a "canonical" answer to your question.

Now, there are a few examples which are almost impossible to explain unless the kids can literally read Snoopy's mind. There's even an example as early as 17 Feb 1968, when Snoopy is going through his Valentines, thinking, "And Edna, and Naomi, and Lila, and Fran, and.." and Charlie Brown interrupts, "YOU DIDN'T GET A VALENTINE FROM LILA!" But I think we can treat these as errors or anomalies, when Schulz broke his own rules for the sake of an irresistible gag. The "canonical" answer is that it's supposed to be somewhat mysterious how the kids intuit what Snoopy is thinking, and it's not supposed to be telepathic communication.

Not the answer you're looking for? Browse other questions tagged character-analysis charles-m-schulz peanuts or ask your own question.

80
Snoopy can balance on an edge atop his doghouse. Is any reason given for this?
7
Why does Linus say "I think you finished it" to Sally in this Sunday strip?