Where can I find R. K. Narayan's maiden speech to the Indian parliament?

spoke of children having so much homework that they had no time to play. He focused on the school bag. “The school bag has become an inevitable burden for the child. I am now pleading for abolition of the school bag, as a national policy, by an ordinance if necessary. I have investigated and found that an average child carries strapped to his back, like a pack-mule, not less than six to eight kilograms of books, note books and other paraphernalia of modern education in addition to lunch box and water bottle..”.
(bunpeiris: R. K. Narayan, no date)

Several sources, including "R.K. Narayan resonates across cultures" (The Hindu, 13.10.2006), point out that the focus of Narayan's speech was not surprising because the author had already written about the burden experienced by children in his debut novel Swami and Friends (1935).

The article "Leave Those Kids Alone: Committee recommends school curriculum reform" in the Times of India, 24.05.2005, adds that

[Narayan's] speech led to the appointment of a committee chaired by Prof Yash Pal in 1991, but its report, Learning Without Burden, received little by way of serious attention. Its main point, that our system of education confuses knowledge with information, proved too obvious to be recognised as an indictment of curriculum designers.

I have searched online for the text of this speech using search terms such as "Indian parliament", "Rajya Sabha", "Narayan" and quotes from the first source mentioned above, but I have come up empty-handed. Is Narayan's speech to the Rajya Sabha available anywhere?

In the collection A Story-teller's World, published in 1989 by Penguin Books India.

At least that's where I found it, after searching Google for part of the quote that you provided in your question. Other collections may also contain it, but this is where I found the clearest indication that it is the full text of his maiden speech to Parliament. It is in the second section of the collection, "Short Essays", on pages 72-73. The title is "Cruelty to Children", with a footnote that this is "Narayan's maiden speech as a Member of Parliament delivered at the Rajya Sabha in 1989", and the text is as follows:

In the stress of the concerns of the adult world, the problems or rather the plight of children pass unnoticed. I am not referring to any particular class but to childhood itself. The hardship starts right at home, when straight from sleep the child is pulled out and got ready for school even before its faculties are awake. He (or she) is groomed and stuffed into a uniform and packed off to school with a loaded bag on his back. The school-bag has become an inevitable burden for the child. I am now pleading for abolition of the school-bag, as a national policy, by an ordinance if necessary. I have investigated and found that an average child carries strapped to his back, like a pack-mule, not less than six to eight kgs of books, notebooks and other paraphernalia of modern education in addition to lunch-box and water bottle. Most children on account of this daily burden develop a stoop and hang their arms forward like a chimpanzee while walking, and I know cases of serious spinal injuries in some children too. Asked why not leave some books behind at home, the child explains it is her teacher's orders that all books and notes must be brought every day to the class, for what reason God alone knows. If there is a lapse, the child invites punishment, which takes the form of being rapped on the knuckles with a wooden scale, a refinement from our days when we received cane cuts on the palm only. The child is in such terror of the teacher, whether known as Sister, Mother Superior, or just Madam, that he or she is prepared to carry out any command issued by the teacher, who has no imagination or sympathy.

The dress regulation particularly in convent schools is another senseless formality - tie and laced shoes and socks, irrespective of the climate, is compulsory. Polishing a shoe and lacing it becomes a major task for a child first thing in the day. When the tie has become an anachronism even in the adult world, it's absurd to enforce it on children. A simple uniform and footwear must be designed and brought into force and these should be easier to maintain.

After school hours when the child returns home her mother or home tutor is waiting to pounce on her, snatch her bag and compel her to go through some special coaching or homework. For the child the day has ended; with no time left for her to play or dream. It is a cruel, harsh life imposed on her, and I present her case before this house for the honourable members to think out and devise remedies by changing the whole educational system and outlook so that childhood has a chance to bloom rather than wilt in the process of learning.

Other areas where the child needs protection is from involvement in adult activities such as protest marches, parades, or lining up on road-sides for waving in VIPs; children are made to stand in the hot sun for hours without anyone noticing how much they suffer from fatigue, hunger and thirst. Children must be protected, and cherished which would seem especially relevant in this year of the Nehru centenary. How it is to be done is upto our rulers and administrators to consider - perhaps not by appointing a commission of enquiry, but in some other practical and peaceful manner.

The website Rajya Sabha Official Debates is a portal maintained by the Govt. of India containing transcripts of all the debates held in the Rajya Sabha since its first session.

RK Narayan's speech titled Over-Burdening of School Children (not Cruelty to Children, as mentioned in @Randal'Thor's answer) was delivered during the 150th session of the Rajya Sabha on 27th April, 1989. The transcript of the entire day's proceedings can be viewed here. RK Narayan's speech appears in the section Special Mentions on pages 183–186 of the document (pages 92–93 of the PDF file). 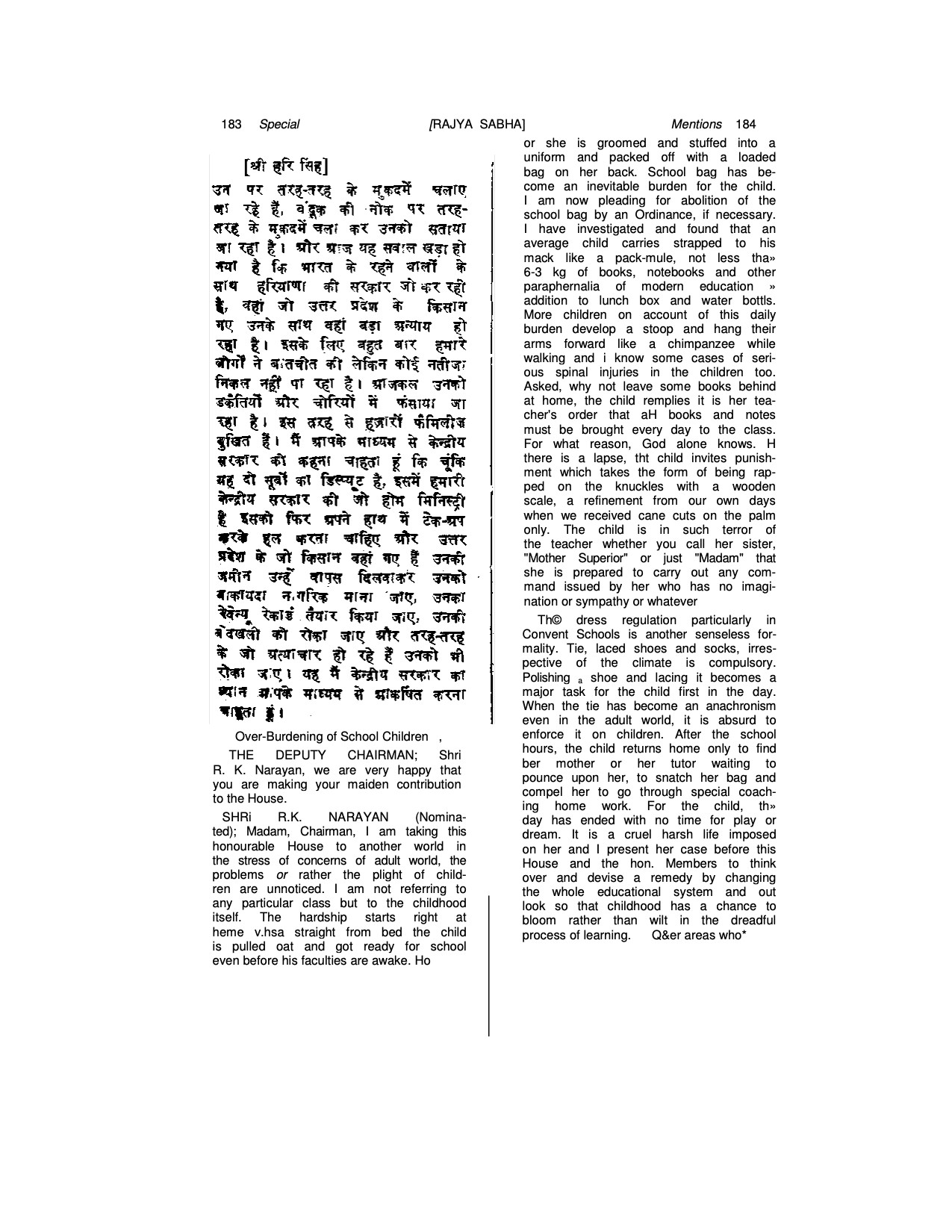 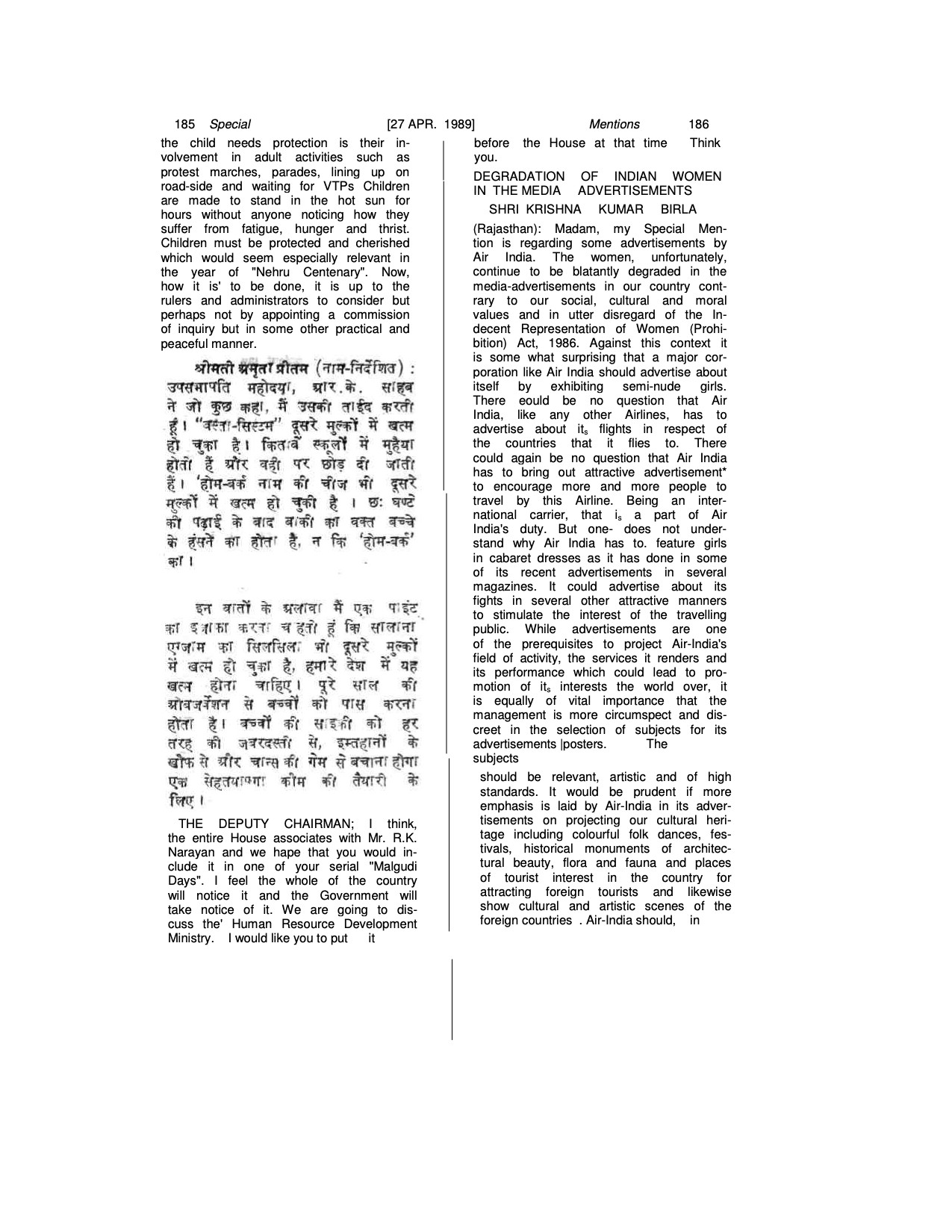 The transcript has some typographical errors, to be sure. My guess is that too much effort was not expended on correcting such mistakes, which were probably induced by the OCR.

It might also be interesting to note that the transcript contains a response to the above speech by Smt. Amrita Pritam in Hindi, before the concluding remarks by the Deputy Chairman of the Rajya Sabha, Najma Heptulla.

The typos in the transcript make reading it a bit of a pain, but the content (except for the title, oddly) is exactly the same as provided by @Randal'Thor, so I recommend heading over to that answer to avoid the hassle.

I might as well add that the information given by @Randal'Thor that the speech was delivered in 1989 helped me narrow my search—it was becoming quite a pain, browsing through every single transcript from the year 1986 onwards!

Not the answer you're looking for? Browse other questions tagged identification-request r-k-narayan or ask your own question.

6
Trying to find a poem called "The Boaster"
2
Where can I find the text of the poem "Climbing Tintagel" by (I think) Vicki Feaver?
2
Who made the cartoon where the ping pong champion got beat by a kid, and can you share an image?
0
Trying to find a book from the 2000s geared towards young adult/teens
3
Can anyone identify this parody of 'Consider the ant'?
4
Book where all the characters are named after chess pieces
1
Tale of a Dog Chasing the Sun/Trying to Find Its Owner?