Is Narayan really quoting a traditional proverb, and from which Indian language/culture?

In the story "Fellow-Feeling" from R. K. Narayan's short story collection Malgudi Days (which I've been reading online), a proverb is mentioned in passing:

Rajam Iyer leaned back in his seat, reminding himself of a proverb which said that if you threw a stone into a gutter it would only spurt filth in your face.

I'd never heard this before, but I like it. In context it's a metaphor for not arguing with idiots, along the same lines as "don't mud-wrestle with a pig, because you'll both get filthy but the pig will enjoy it" and "don't play chess with pigeons: they'll knock over the pieces, crap all over the board, and then strut around like they've won". But I like this one even better, and I'd like to know its source. The story suggests it's a traditional or well-known proverb, but Googling it only gave me pages about this very story.

Did Narayan invent this saying, or is it really a proverb? If the latter, what language/culture does it come from?

It might be that my Google search for a real proverb failed because this only became known in English through Narayan, and in some Indian language/culture it might indeed be well known. For what it's worth, the character Rajam Iyer is a Brahmin, reading a book in Tamil, travelling from Madras to Bangalore. (I don't know enough about Indian cultures to know which of these facts is most likely to be relevant.)

The book A Classified Collection of Tamil Proverbs by the Rev. Herman Jensen, Danish Missionary, Madras (published in 1897 by The Methodist Episcopal Publishing House, Madras) lists the proverb on page 258:

If you throw stones into mud it will splash over yourself.

"If you will stir up the mire, you must bear the smell."
"He who blows in the dust fills his eyes with it."
"Do not throw clods into dung to splatter your own clothes."

A scanned copy of the book can be accessed at the website of the Rare Book Society of India (RBSI). 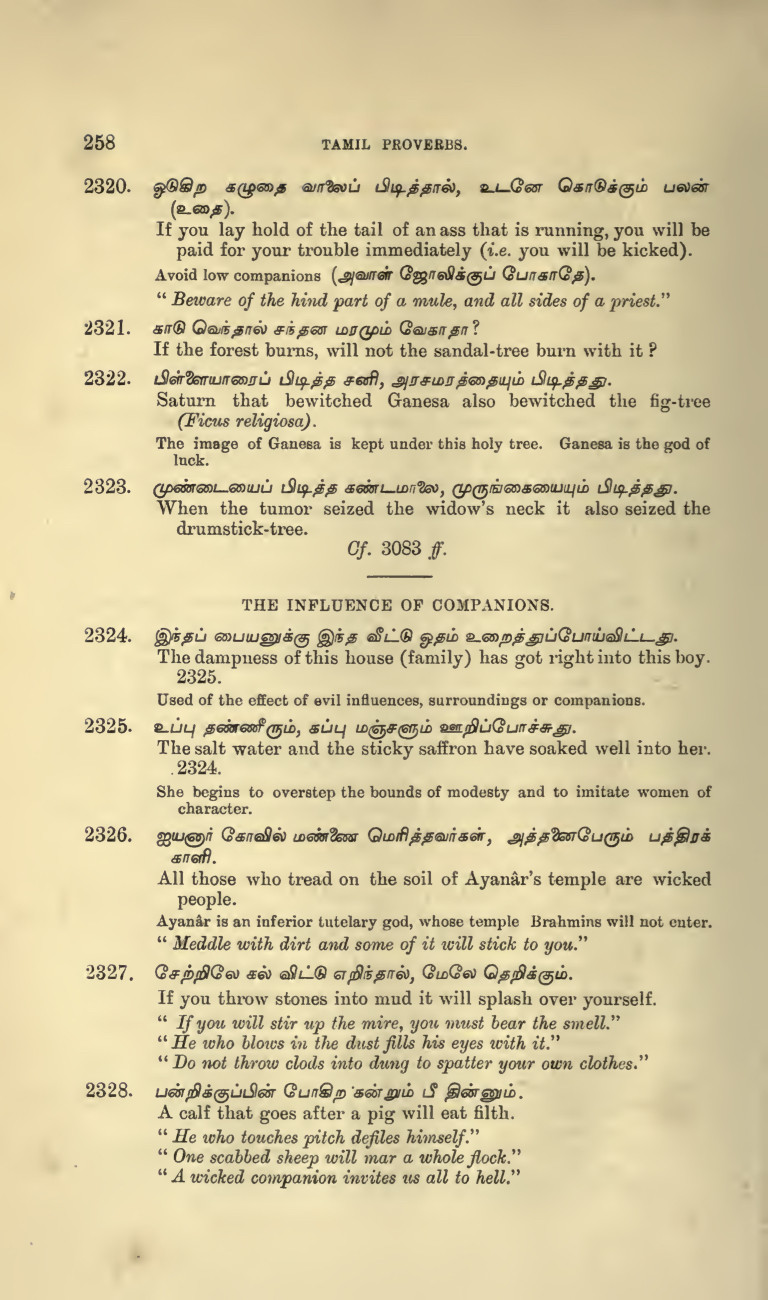 It's a bit of an odd translation - but the actual proverb goes:

Apparently it is Tamil, but not specifically unique to the Tamil-Brahmin culture, who have a few linguistic quirks of their own.

There's a less polite version that seems a better fit:

While I'm unsure if a conservative/orthodox Brahmin would use such a term, I'm assured that linguistic standards of that generation were much less Puritan than ours.

Not the answer you're looking for? Browse other questions tagged short-stories cultural-context r-k-narayan or ask your own question.

3
What is "machullah" in Stanley G. Weinbaum's short story Graph?
5
Looking for a short story about a person whose conversations run from A to Z
4
What does this passage mean about third-class passengers in the Madras-Bangalore Express?
4
Why does Rajam Iyer lie about the bully at the end of "Fellow-Feeling"?
4
When were the short stories of Malgudi Days published?