I read this book a long time ago about a stuffed cat and a stuffed dog who get hungry when their owner leaves and eat each other: they rip each other apart until they are each just a rag. 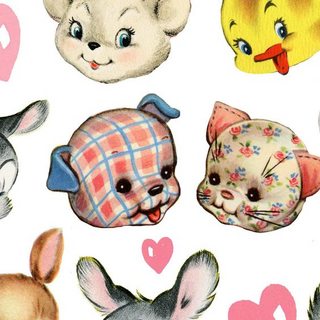 I believe you may be thinking of the poem "The Duel", also known as "The Gingham Dog and the Calico Cat", by Eugene Field.

It's been published in many formats, with various art; for instance, this edition:

The poem itself goes like this (and is in the public domain):

The gingham dog and the calico cat
Side by side on the table sat;
'T was half-past twelve, and (what do you think!)
Nor one nor t' other had slept a wink!
The old Dutch clock and the Chinese plate
Appeared to know as sure as fate
There was going to be a terrible spat.
(I wasn't there; I simply state
What was told to me by the Chinese plate!)

The gingham dog went "Bow-wow-wow!"
And the calico cat replied "Mee-ow!"
The air was littered, an hour or so,
With bits of gingham and calico,
While the old Dutch clock in the chimney-place
Up with its hands before its face,
For it always dreaded a family row!
(Now mind: I'm only telling you
What the old Dutch clock declares is true!)

The Chinese plate looked very blue,
And wailed, "Oh, dear! what shall we do!"
But the gingham dog and the calico cat
Wallowed this way and tumbled that,
Employing every tooth and claw
In the awfullest way you ever saw—
And, oh! how the gingham and calico flew!
(Don't fancy I exaggerate—
I got my news from the Chinese plate!)

Next morning, where the two had sat
They found no trace of dog or cat;
And some folks think unto this day
That burglars stole that pair away!
But the truth about the cat and pup
Is this: they ate each other up!
Now what do you really think of that!
(The old Dutch clock it told me so,
And that is how I came to know.)
Eugene Field

7
Any significance to the "Dutch clock" and "Chinese plate" in Eugene Field's "The Duel"?

13
Identify a Children's Book about a character who eats all his groceries on the way home
4
Book about "lesser" and "greater" magic, with main protagonist who learns both?
5
Children's book (maybe German) I read in about 1995, fox and badger need to dig a tunnel to escape from farmer guarding their burrow's exit
6
Searching for an Illustrated Children's Book with Animal Characters
4
Help identify the story "I did not sell my child"; ends with the grown up child deserting parents
4
Children's book - girl's mother sent to jail for theft, dog and girl on cover
7
Identify a children's story about a little girl who collected items, had a monster in the basement, and solved a dog-napping mystery!