What’s up with the coal in “Asterix and the Chieftain’s Shield”?

In Asterix and the Chieftain’s Shield, the inhabitants of Gergovia are obsessed with wine and charcoal, all having shops selling both. The coal is used for a running gag in the book as the Romans often dirty themselves with coal dust when searching these cellars for something or somebody hiding there.

It feels like the entire coal obsession does not only exist to facilitate this running gag, but is a reference to something or similar. However, the typical sources, such as the Notes section on Wikipedia do not mention anything.

Thus I am asking: Why was coal used as theme and plot device in this book?

The charcoal connection is found with the ‘Bougnats of Paris’. From France écotours:

in the 18th century, the agricultural crisis forced thousands of French countrymen to leave their homes in search of work. The Auvergne people left the volcanic soil of their homeland for the capital. There, the new Parisians built a community where they became known as “Bougnats”.

The nickname Bougnat first appeared during the Second Empire (1852-1870).The word is a contraction between charcoal maker, charbonnier, and a person from Auvergne, Auvergnats: charbougnats.

At the end of the 19th century, the Auvergne residents decided to sell the coal they imported from Brassac-Les-Mines via rivers and canals. It was at this time when coalmining activity increased that the nickname Bougnat emerged. Immigrants opened Wines and Charcoal cafes to market their commodity, additionally selling spirits and lemonade.

The term “bougnat” then ended up referring to both the Auvergnat residents in Paris as well as their cafes adjacent to their sale of coal. In these particular cafes, women were responsible for serving coffee while their husbands delivered coal to the customers. Often, Bougnats supplemented their activity with restaurants and hotels.

In the Wikipedia entry for Bougnat, we read:

In Asterix and the Chieftain's Shield, the eleventh collection of The Adventures of Asterix, the town of Gergovie is full of "wine and coal" shops, in reference to the bougnats.

Here is a historical photograph of an actual shop for wine, wood, and coal (vins, bois et charbons): 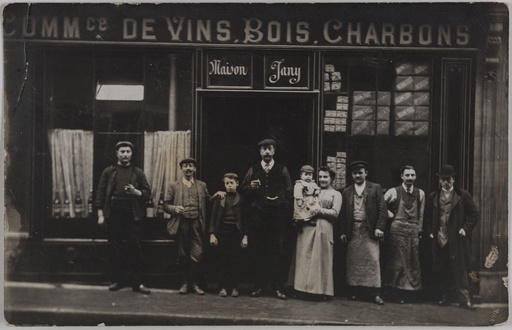 Not the answer you're looking for? Browse other questions tagged french-literature comics rene-goscinny albert-uderzo asterix or ask your own question.

9
What's up with the colors of Delirium's speech bubbles?
4
Is the heart in "The Hunt" associated with Desire?
3
Tan/Brown graphic novel about family in a beach and kid with frog/toad head
8
Does the magic potion provide invincibility or only superhuman strength?
6
Are the Asterix comics about a drug culture?
2
What is Meursault's problem with the heat?
3
Comic about Mayas and/or Aztecs invading Europe instead of the other way round