Why is the superstate Winston lives in named Oceania in 1984?

Winston Smith lives in London, a city in the superstate of Oceania. As shown in this map, Oceania consists of all of the Americas, the United Kingdom, and Australia. In the modern world today, Oceania refers to the region of the world that includes Australia, New Zealand, etc. Why, then, would Orwell choose Oceania as the name for a superstate that includes North America, South America, and a part of Europe?

Oceania, Eurasia, and Eastasia are all named for their geographical features.

The best description we have of the three superpowers and their geography comes from Chapter III (War is Peace) of Emmanuel Goldstein's magnum opus:

Oceania comprises the Americas, the Atlantic islands including the British Isles, Australasia, and the southern portion of Africa. Eastasia, smaller than the others and with a less definite western frontier, comprises China and the countries to the south of it, the Japanese islands and a large but fluctuating portion of Manchuria, Mongolia, and Tibet.

We see, then, that Oceania is an entirely apt description for this superpower which consists mostly of ocean, just as Eurasia is an apt name for the one which covers most of the continents of Europe and Asia, and Eastasia for the one which is geographically smallest and tucked into eastern Asia. 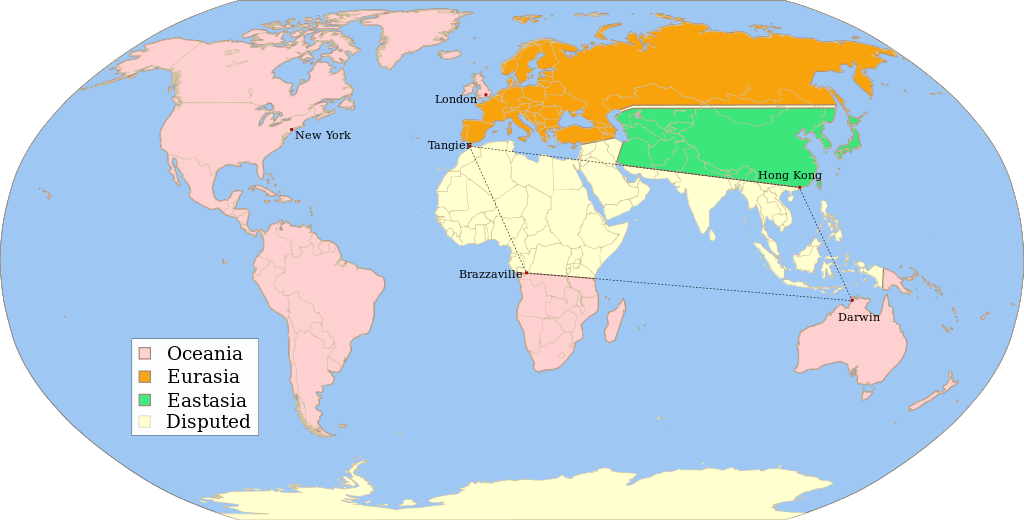 Oceania's oceans are also its major military advantage in the eternal war between the three nations, and the asset which makes it essentially unconquerable:

None of the three super-states could be definitively conquered even by the other two in combination. They are too evenly matched, and their natural defences are too formidable. Eurasia is protected by its vast land spaces, Oceania by the width of the Atlantic and the Pacific, Eastasia by the fecundity and industriousness of its inhabitants.

I always assumed it was because it touched every single ocean in the world: Pacific (US), Atlantic (US), Indian (Australia), Southern/Antarctic (Australia), and Arctic Oceans (Canada). You can also think of it as covering every ocean (but missing all the largest seas!), although Eurasia and Eastasia would dispute the Pacific and Eurasia would dispute the Atlantic and Arctic.

Not the answer you're looking for? Browse other questions tagged name-significance george-orwell nineteen-eighty-four or ask your own question.