What does this verse said by Portia in Julius Caesar mean?

In Shakespeare's play Julius Caesar when Brutus had planned everything and the night before the assassination he was in his room he had a little conversation with his wife Portia. During the conversation Portia says

Giving myself a voluntary wound Here, in the thigh: can I bear that with patience.
And not my husband’s secrets?

What do the above verses mean? I find it a little open when a woman talks about wounding her thigh, I find it beacuse of cultural influences. So, as the play at that moment was at a serious turn why we got such a reference? What’s the significance of “wounding the thigh” ?

Shakespeare’s main sources for Julius Caesar were Plutarch’s biographies of Julius Caesar and Marcus Brutus, which he read in the 1579 English translation of Thomas North. The episode you are asking about appears in the biography of Brutus:

His wife Porcia (as we have told you before) was the daughter of Cato, whom Brutus married being his cousin, not a maiden, but a young widow after the death of her first husband Bibulus, by whom she had also a young son called Bibulus, who afterwards wrote a book of the acts and gests¹ of Brutus, extant at this present day. This young lady, being excellently well seen² in philosophy, loving her husband well, and being of a noble courage, as she was also wise: because she would not ask her husband what he ailed before she had made some proof by³ her self: she took a little razor, such as barbers occupy⁴ to pare men’s nails, and, causing her maids and women to go out of her chamber, gave herself a great gash withal in her thigh, that she was straight all of a gore blood⁵: and incontinently⁶ after, a vehement fever took her, by reason of the pain of her wound. Then perceiving her husband was marvellously out of quiet, and that he could take no rest, even in her greatest pain of all she spake in this sort unto him: “I being, O Brutus,” said she “the daughter of Cato, was married unto thee; not to be thy bed-fellow and companion in bed and at board only, like a harlot, but to be partaker also with thee of thy good and evil fortune. Now for thyself, I can find no cause of fault in thee touching our match: but for my part, how may I shew my duty towards thee and how much I would do for thy sake, if I cannot constantly⁷ bear a secret mischance or grief with thee, which requireth secrecy and fidelity? I confess that a woman’s wit commonly is too weak to keep a secret safely: but yet, Brutus, good education and the company of virtuous men have some power to reform the defect of nature. And for myself, I have this benefit moreover, that I am the daughter of Cato, and wife of Brutus. This notwithstanding, I did not trust to any of these things before, until that now I have found by experience that no pain or grief whatsoever can overcome me.” With those words she shewed him her wound on her thigh, and told him what she had done to prove herself. Brutus was amazed to hear what she said unto him, and lifting up his hands to heaven, he besought the gods to give him the grace he might bring his enterprise to so good pass⁸, that he might be found a husband worthy of so noble a wife as Porcia: so he then did comfort her the best he could.

This is quite clear about Portia’s motivations: in order to demonstrate to her husband in the most dramatic fashion that she has the fortitude to endure pain, and the constancy to keep secrets, she has cut herself and hidden the wound from her husband.

Plutarch’s original Greek is ‘μηρός’ meaning ‘thigh’ or ‘thigh-bone’. The word appears in the Iliad I.190 where Achilles wonders whether to ‘draw his sharp sword from beside his thigh’ (‘φάσγανον ὀξὺ ἐρυσσάμενος παρὰ μηροῦ’).

You’ll see that Shakespeare follows North’s translation of Plutarch very closely at some points in the scene. In this extract I’ve bolded parts of Shakespeare’s text that particularly resemble passages in North:

PORTIA. I should not need, if you were gentle Brutus.
Within the bond of marriage, tell me, Brutus,
Is it excepted I should know no secrets
That appertain to you? Am I yourself
But, as it were, in sort or limitation,
To keep with you at meals, comfort your bed,
And talk to you sometimes? Dwell I but in the suburbs
Of your good pleasure? If it be no more,
Portia is Brutus’ harlot, not his wife.

BRUTUS. You are my true and honorable wife,
As dear to me as are the ruddy drops
That visit my sad heart.

The question wonders (if I interpret it correctly) whether ‘thigh’ has a sexual connotation. I think that there is a choice of interpretations here. The plain reading of the passage is that Portia is demonstrating her bravery and constancy, and the cut is in the thigh because this is the best place to keep the wound secret, as it will be hidden by clothing. But we also recognise that deliberate self-injury can be a response to an intolerable situation, when one’s words and concerns are being ignored, as Portia’s are by Brutus. It is in this second interpretation that ‘thigh’ might have a sexual significance: a part of the body that ought, in a healthy marriage, to be a site of sexual pleasure, becomes, in Portia and Brutus’s marriage, a target of secret violence.

This last interpretation seems to have influenced Elisabetta Sirani’s 1664 painting of the episode: 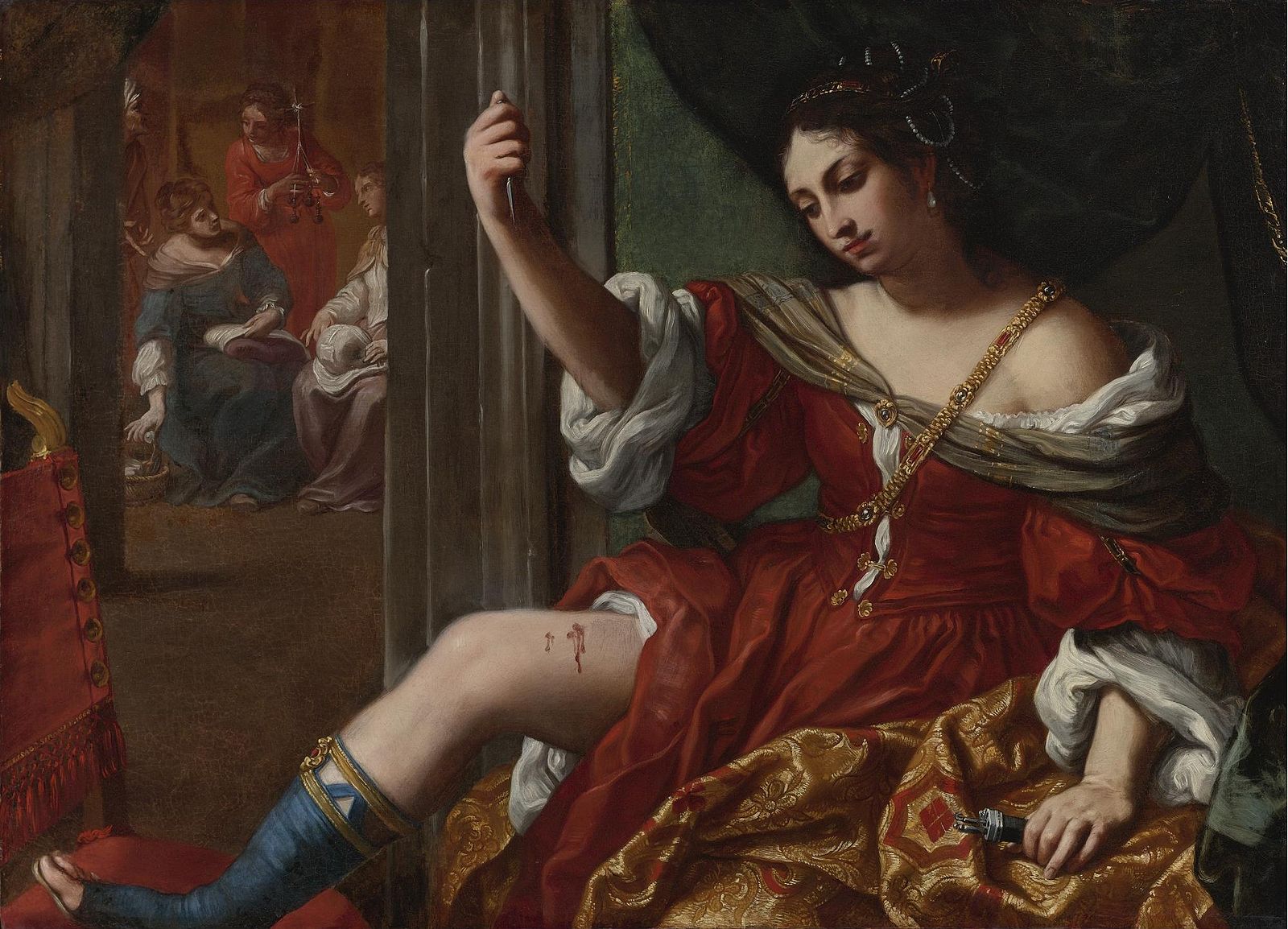 The source for the current passage is The Life of Marcus Brutus, which contains a similar conversation between Brutus and his wife Portia (pages 118-119 in the 1964 printing of Spencer's book):

'I being, O Brutus,' said she, 'the daughter of Cato, was married unto thee, not to be thy bedfellow and companion in bed and at board only, like a harlot, but to be a partaker also with thee of the good and evil fortune. (...) But for my part, how may I show my duty towards thee and how muchI would do for thy sake, if I cannot constantly bear a secret mischance or grief with thee, which requireth secrey and fidelity? (...) And for myself I have this benefit moreover: that I am the daughter of Cato and wife of Brutus. This notwithstanding, I did not trust to any of these things before, until that now I have found by experience that no pain nor grief whatsoever can overcome me.'
With those words she showed him her wound on her thigh and told him what she had done to prove herself.

Portia's father, Marcus Porcius Cato (who was also Brutus's uncle) was famous for his rigid moral code. Cato had fought against Caesar and after his final resistance in Utica (in Africa) he committed suicide in order to avoid being captured. The implication of this is that Portia has no reason to like Caesar, and in this dialogue she convinces her husband Brutus that she can keep a secret and shows that she has put her powers of resolution to the test ("made strong proof of my constancy"; see Norman Sanders's paraphrase).

Editors of the play, e.g. Arthur Humphries (Oxford Shakespeare, 1984) and Norman Sanders (New Penguin Shakespeare, 1967) don't mention any "Freudian" subtext that might be read into these lines. Those looking for a sexual subtext should compare Portia's words about her wound with from Act 1, scene 2:

CAESAR: Calphurnia.
CALPHURNIA: Here, my lord.
CAESAR: Stand you directly in Antonius' way
When he doth run his course. Antonius.
ANTONY: Caesar, my lord?
CAESAR: Forget not, in your speed, Antonius,
To touch Calphurnia; for our elders say,
The barren, touchèd in this holy chase,
Shake off their sterile curse.

This probably sounds a bit obscure, but it is based on Plutarch's The Life of Julius Caesar (see page 83 in Spencer's book):

At that time the feast Lupercalia was celebrated, the which in old time men say was the feast of sheperds or herdmen and is much like unto the feast of the Lycaeans in Arcadia. But howsoever it is, that day there are divers noblemen's sons, young men - and some of them magistrates themselves that govern them - which run naked through the city, striking in sport them they meet in their way with leather thongs, hair and all on, to make them give place. And many noblewome and gentlewomen also go of purpose to stand in their way, and do put forth their hands to be stricken, as scholars hold them out to their schoolmasters to be stricken with the ferula; persuading themselves that, being with child, they shall have good delivery, and also, being barren, that it will make them to conceive with child. (...) Antonius, who was Consul at that time, was one of them that ran this holy course.

Plutarch does not mention Calphurnia's sterility ("sterile curse" in Shakespeare), which Freudian readers might see as contrasting with Portia's ability to bleed. Whether Shakespeare had this type of contrast in mind is a different matter.

Not the answer you're looking for? Browse other questions tagged meaning william-shakespeare julius-caesar or ask your own question.

24
Did Shakespeare consider Julius Caesar a tyrant or a martyr?
24
Why does Shakespeare's Julius Caesar switch to Latin for the "Et tu, Brute" line?
15
Why does Portia say this to Bassanio in Act III Scene 2 of The Merchant of Venice?
6
Does Portia subconsciously influence Bassanio's choice of casket?
6
What texts are the sources for the difference between "sometime were" and "some time are" in Shakespeare's Julius Caesar?
3
What does Cassius mean when he refers to his mother?
1
Why do we get some explicit references in Shakespearean plays that are meant for something else?
3
Meaning of the words "Ambition should be made of sterner stuff" from Julius Caesar
6
Julius Caesar: "If it be aught toward the general good, Set honor in one eye and death i’ th’ other..."
7
Is this part of Mark Antony's speech to the conspirators in the play "Julius Caesar" meant to be honest?