Why the name “Gumdrop” for the vintage car?

As a child I enjoyed some of the Gumdrop stories, without ever realising that the name of the car Gumdrop was the same as a type of sweet. Perhaps the reason for this name is explained somewhere in the books and I've long forgotten it.

Why was the car called Gumdrop? It doesn't seem to look especially like a gumdrop sweet: 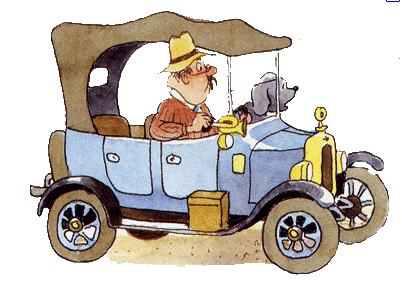 The (defunct) Val Biro Official Fan web page has a brief interview with Val Biro on this subject, adding to the wording found in Gumdrop Makes a Start.

HOW GUMDROP GOT HIS NAME

The boy was enchanted. What a lovely sound; "Guuuuum-Drrrropopopop". As if the car had called out his own name. "That's it!" he declared to one and all. "That's his name. GUMDROP!" and he felt convinced that Gumdrop was the only car for him.

This presumably is also the out-of-universe reason that Balint Stephen "Val" Biro named his real-world car (on which the book series is based).

Not the answer you're looking for? Browse other questions tagged name-significance val-biro gumdrop or ask your own question.

7
Why is Josef K.'s last name never revealed?
2
Did Eric Clapton name his dog after Dr. Dolittle's Pooch?
6
What is the joke in the name “Robert Jordon”?
3
What is the origin of the name “Frankenstein”?
3
Where did Charles Dickens come up with the name “Magwitch”?