How to understand the meaning of "Columbine types" and "sniper material"?

The following is an excerpt from "Wifey Redux" by Kevin Barry:

What type can be regarded as "Columbine type"? Does "sniper material" really mean someone meant to become a sniper (shooter)? 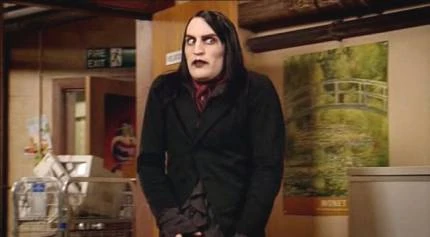 Following along to muru's and Kevin Ryan's excellent answers, "sniper material" may be an allusion to the Cold Sniper (warning, TV Tropes entry) stereotype as a loner with a lack of emotion or compassion. To quote the U.S. Army Training Manual on Sniper Training:

"(1) Emotional balance. The sniper must be able to calmly and deliberately kill targets that may not pose an immediate threat to him. It is much easier to kill in self-defense or in the defense of others than it is to kill without apparent provocation. The sniper must not be susceptible to emotions such as anxiety or remorse. Candidates whose motivation toward sniper training rests mainly in the desire for prestige may not be capable of the cold rationality that the sniper's job requires."

Also, in conjunction with the mention of the Columbine shootings, mention of them as "snipers" also might be seen as a reference to earlier school shootings which involved firing from a greater range such as the University of Texas Tower shooting, Olean High School shooting, or the Cleveland Elementary School shooting, all involving individuals who seemingly planned their assault out in advance for maximum effect.