In Kipps, what does H. G. Wells mean by “colonial meat by contract at threepence a pound”?

I came across this following sentence in H. G. Wells' Kipps and I don't understand what it means.

What he put into Kipps was chiefly bread and margarine, infusions of chicory and tea-dust, colonial meat by contract at threepence a pound, potatoes by the sack, and watered beer.

I get the other parts of the sentence, but what is "colonial meat"? Is it a particular type of meat? Or is it in reference to a method of farming/processing in the British Empire? Or, is it "colonial" as in an animal colony (This one may be too far off the mark as it doesn't seem to make much sense but just in case)？Also, "by contract" is alluding to the existence of some business arrangement between retailers and farms, right?

Within five years, 172 shipments of frozen meat were sent from New Zealand to Britain, mostly without mishap: it was a trade that grew to such an extent that, by 1957, New Zealand was exporting 14m lamb carcasses to Britain each year.

The first successful shipment of antipodean frozen meat did not take place until 1879, when it sailed from Sydney, aboard the steamship the Strathleven, which docked in London 59 days later, with a perfectly preserved cargo. Mort, who also owned an abattoir, was keen to ship internationally, partly to offset his concerns relating to the falling price of wool (an anxiety for which Trollope would have had great sympathy) and partly because of a belief in making affordable, nutritious food available to as many people as possible, hoping to be able to sell it in England for six pence a pound (meat then cost between eight pence and a shilling per pound, depending upon the animal and the cut).

The UK imported meat from its colonies, hence ‘colonial meat’. 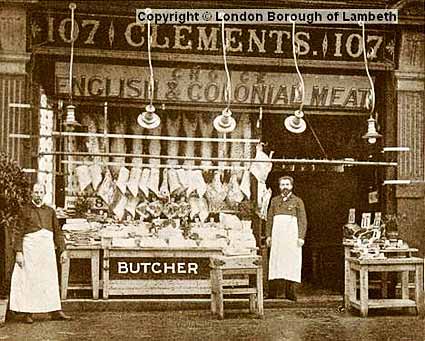 I’m not able to shine any light on the reference to ‘contract’.

Not the answer you're looking for? Browse other questions tagged meaning h-g-wells kipps or ask your own question.