What are T. S. Eliot’s “Jellicle Cats” and “Pollicle Dogs”?

T. S. Eliot’s poem ‘The Song of the Jellicles’ was first published in Old Possum’s Book of Practical Cats (1939) and was popularized by Andrew Lloyd Webber’s musical Cats. It begins:

Another group of curiously named animals in the book are the “Pollicle Dogs”:

But a terrible din is what Pollicles like,
For your Pollicle Dog is a dour Yorkshire tyke

T. S. Eliot (1939). ‘The Awefull Battle of the Pekes and the Pollicles’. Old Possum’s Book of Practical Cats. London: Faber and Faber.

What are “Jellicle Cats” and “Pollicle Dogs”? Where do these names come from?

Catherine Milner, Arts Correspondent of the Telegraph, wrote in 2002:

According to Dr Faber, a retired physicist who is now 74 and lives in Cambridge, Eliot was "a very generous godfather and the subject of great envy by my siblings". "He was quite a chameleon in many ways; he would be grave or funny as he so desired and could write anything - adopt any mood." Pollicle Dogs was a corruption of "poor little dogs", just as Jellicle Cats are "dear little cats".

Eliot’s godson Tom Faber was the son of Geoffrey Faber, the co-founder of the publishers Faber and Faber for whom Eliot worked as an editor. Tom’s widow Elizabeth put up Eliot’s letters to her husband for auction in 2005. This collection of typed letters includes the first known appearance of “Jellicle” and “Pollicle”: 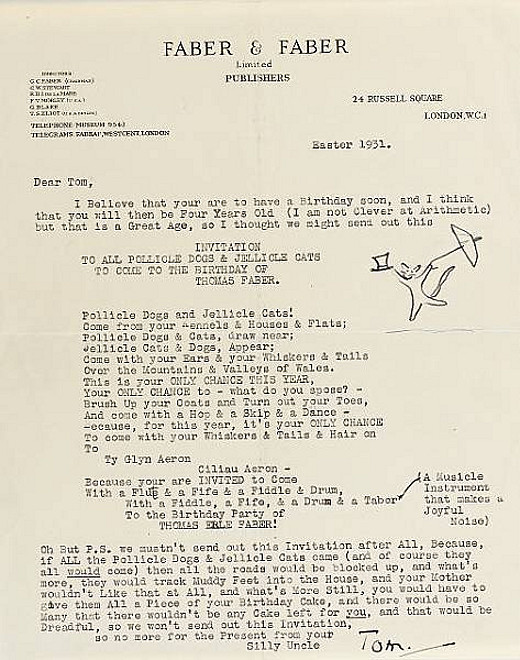 I Believe that your are to have a Birthday soon, and I think that you will then be Four Years Old (I am not Clever at Arithmetic) but that is a Great Age, so I thought we might send out this

INVITATION TO ALL POLLICLE DOGS & JELLICLE CATS TO COME TO THE BIRTHDAY OF THOMAS FABER.

Pollicle Dogs and Jellicle Cats!
Come from your Kennels & Houses & Flats;
Pollicle Dogs & Cats, draw near;
Jellicle Cats & Dogs, Appear;
Come with your Ears & your Whiskers & Tails
Over the Mountains & Valleys of Wales.
This is your ONLY CHANCE THIS YEAR,
Your ONLY CHANCE to—what do you spose?—
Brush Up your Coats and Turn out your Toes,
And come with Hop & a Skip & a Dance—
Because, for this year, it’s your ONLY CHANCE
To come with your Whiskers & Tails & Hair on
To
Ty Glyn Aeron
Ciliau Aeron—
Because your are INVITED to Come
With a a Flute & a Fife & a Fiddle & Drum,
With a Fiddle, a Fife, & a Drum & a Taber*
To the Birthday Party of
THOMAS ERLE FABER!

* (A Musicle Instrument that makes a Joyful Noise)

Oh But P.S. we mustn’t send out this Invitation after All, Because, if ALL the Pollicle Dogs & Jellicle Cats came (and of course they all would come) then all the roads would be blocked up, and what’s more, they would track Muddy Feet into the House, and your Mother wouldn’t Like that at All, and what’s More Still, you would have to give them All a Piece of your Birthday Cake, and there would be so Many that there wouldn’t be any Cake left for you, and that would be Dreadful, so we won’t send out this Invitation,
so no more for the present from your
Silly Uncle Tom.

Tŷ Glyn Aeron, now the TyGlyn Hotel, was the Fabers’ holiday home in Ciliau Aeron in Ceredigion. The ungrammatical “your are” appears twice; if deliberate then perhaps it represents another idiosyncracy of young Tom’s speech.

None of the other versions of the origin story are remotely as plausible, relying as they do on unsupported hearsay rather than documentary evidence:

(Goodman’s letter is rather poorly phrased: as written it says that Eliot’s niece mis-pronounced “puppy” so badly that it sounded like “dog”, which I doubt was the intended meaning.)

According to Andrew Lloyd Webber, when T. S. Eliot was a little boy, his grandma would talk about “dear little cats” and “poor little dogs”—but to his young ears it sounded as if she was saying “jellicle cats” and "pollicle dogs.")

A couple of other theories account for only one of the names. Felix Clowder suggested that “Jellicle” is short for “evangelical”, though I am not sure that he was being entirely serious:

Jellicle Cats, it is clear, come out at night to jump about and shout. Does this fact suggest anything? To the casual first glance, perhaps not. But consider: The means adjective means nothing, it is a set of apparently meaningless syllables suggestive only of Edward Lear—until one realizes, consciously or from his own half-conscious memories of small-town tent-revivals, that the author is playing with another and longer word, frequently shortened, at certain social or intellectual levels: E’van-gelical. Jellicle may thus be either a deliberately sly shortening of Evangelical or an accurate rendition of middle-class speech.

TSE addressed letters to Polly Tandy as “Dear Pollicle ma’am” or simply “Dear Pollicle”. At Christmas 1937, he suggested to her a labrador puppy as a possible Christmas present for the children. The epithet came to mean “dog”, as when TSE wrote to Alison Tandy, 20 Dec 1940 about the household where he was lodging for Christmas: “There are also two dogs … There is also a small pollicle which is Australian, and another pollicle is expected by post from Devon.”

Not the answer you're looking for? Browse other questions tagged t-s-eliot word-coinage old-possums-book-of-practical-cats or ask your own question.

14
What is the "heap of broken images" in The Waste Land?
9
Which Upanishad is TS Eliot referencing with "Datta. Dayadhvam. Damyata." and why?
10
What is the relationship between Heart of Darkness and The Hollow Men?
0
What is the correct term for "fine words"?
3
Why did T.S. Eliot make a statement that 'Coriolanus' was Shakespeare's masterpiece and that 'Hamlet' was an artistic failure?
4
In T.S. Eliot's "The Waste Land", how do the wind and the "pearls that were his eyes" connect to the central message of the poem?
4
What is the difference between emotions and feelings in Eliot's essay Tradition and the Individual Talent?
8
Did T. S. Eliot write crime novels under a pseudonym?
0
Are the names J. Alfred Prufrock and Hugh Selwyn Mauberley completely arbitrary?
20
Did T.S. Eliot really plagiarize in "The Love Song of J. Alfred Prufrock"?