In Ted Hughes' "In Laughter" (A Crow poem. See it fully here), the first paragraph depicts "colliding" and "crashing" as the kind of events that happen "In laughter":

[Note that the repeating line "In laughter" is the beginning, not the ending, of each couplet, as evident by Crow's audio version].

In this paragraph, there's one image that I'm not sure how to interpret:

The steamer upends and goes under saluting like a stuntman

"saluting" may simply mean a nautical etiquette flag dipping (and see also this comment), but how do a "saluting" and a "stuntman" are connected to each other as an image of a sinking steamer ship?

Simone Biles just made history this week, and pictures of her performance made me think.

Look at her saluting: 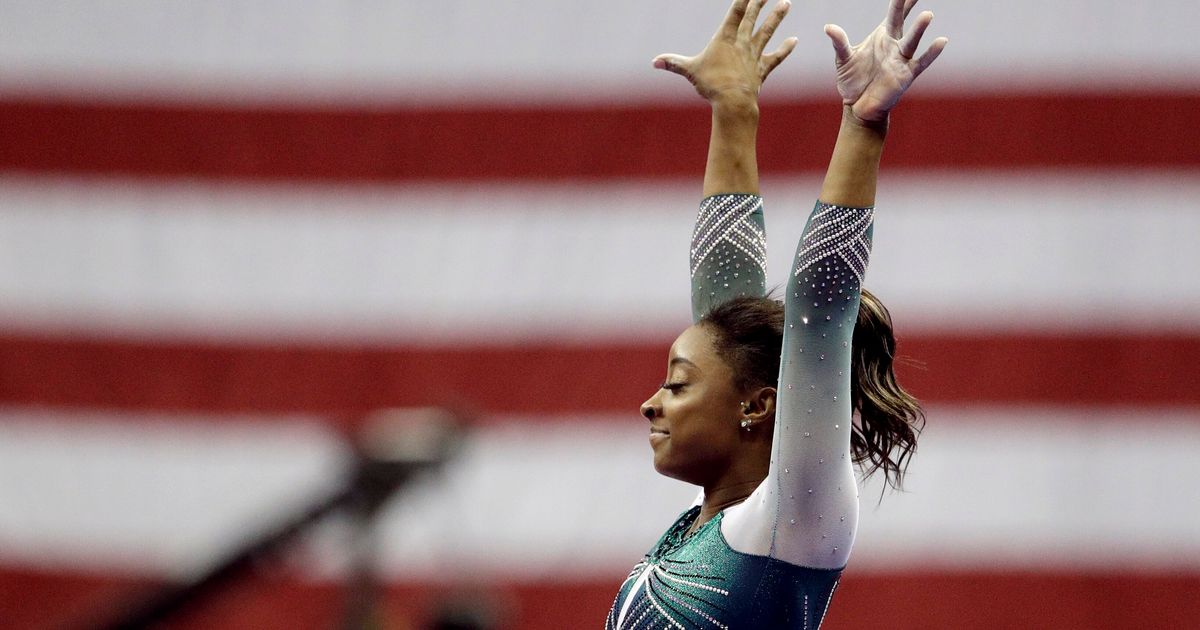 Now look at an upended ship (that's a painting of the Titanic, made by Filson Young): 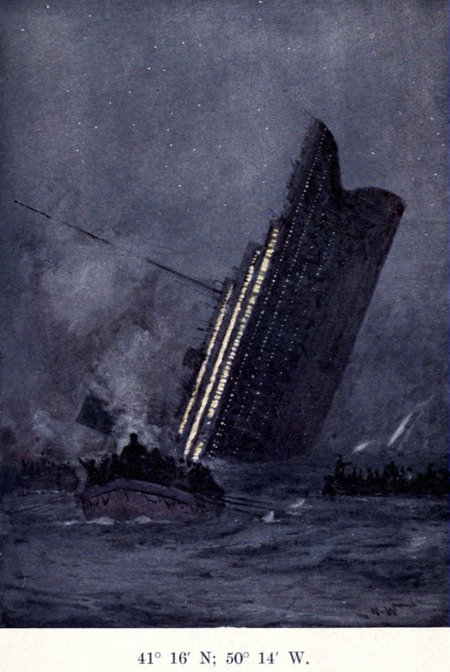 These postures look pretty similar, aren't they? The body is all stretched up, impressively lengthened.

Now, Hughes maybe didn't have a gymnast salute in mind, but maybe he was thinking of something similar - a circus stuntman salute (see e.g. here), picturing a sinking ship as a saluting circus man in an ironic sense.

Considering the song title - and its repeating chorus - is "In Laughter", it's reasonable to also interpret other lines in the first verse in this circus-que light (aside from their apparent macabre meaning).

The image in this line is a synecdoche: it is not the ship itself that is saluting as it goes down, but its captain (or officers, or crew). The comparison to a “stuntman” indicates that we are to imagine the event taking place in a movie: as the model of the ship’s upper works disappears under the surface of the water tank in the studio’s back lot, it is the stuntman standing on the bridge, so that the star does not have to get wet. The sinking being part of a movie explains why people might be laughing at it.

Two critics who agree with this interpretation:

Crow, in short, is the beast of a very modern apocalypse, one in which images of global disaster and individual violence take absurd and grotesque and debased forms that derive quite as much from contemporary mass culture as from literary tradition:

And Crow himself, it seems to me, is conceived and handled in ways which invite comparison with a popular art form peculiar to the twentieth century: the animated cartoon, and its printed relative, the strip cartoon.

Elsewhere, in the poem “In Laughter,” Hughes engages more fundamentally with the performative strategies of the popular visual arts. As David Lodge first noted in his influential 1971 article “Crow and the Cartoons,” this lyric sets highly staged images of violence and pain against a refrain-like soundtrack of canned laughter […] The reference to “a stuntman” highlights the text’s indebtedness to the realms of televisual and movie culture. The poem deliberately aims to shock and unsettle the reader with its robust, surreal humor.

Not the answer you're looking for? Browse other questions tagged meaning ted-hughes crow or ask your own question.