African dystopia with children on the run

This wasn't really a sci-fi novel that I remember, but definitely dystopian. It was set in the future of an African nation, I don't know which one. I don't remember any futuristic tech though...

There were 2 or 3 kids, I think maybe a girl and a boy or 2 boys and a girl. Their father was rich, they lived in a big nice house. Somehow they were kidnapped or ran away from somebody kidnapping them or something.

When the father + mother found they were gone, they sent 3 detectives after the kids.

The detectives traced the kids as the kids went through the slums, market, residential, across the whole city.

Eventually the kids were caught by some demon worship cult and going to be sacrificed, but the detectives rescued them.

Any ideas what this book is?

You stated in chat that you found it (and asked someone to post an answer): The Ear, the Eye and the Arm by Nancy Farmer. 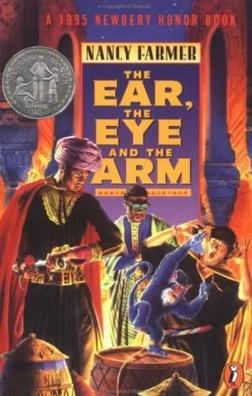 In the year 2194, in Zimbabwe, the Chief of Security, General Matsika, leads a battle against the gangs which terrorize the nation. His three children, Tendai, Rita, and Kuda are kept in a fortified mansion to ensure their security. Seeking adventure to earn the Scout Badge, they escape the house with the help of the Mellower, a praise singer employed by their parents. The children then find themselves in the busy streets of Mbare Musika, where they are kidnapped and taken to Dead Man's Vlei, the lair of the She Elephant. There, they have to work in the plastic mines.

While the Masks attempt to sacrifice Tendai as a messenger to the gods, Arm is possessed by a mhondoro, a holy and legendary spirit of the land, who helps him to find the children. When Arm is knocked out, the mhondoro helps Tendai and his friends to temporarily destroy the Big-Head Mask, which had been going to kill Tendai. When the children's parents arrive, the She Elephant crushes the Mask, and the mhondoro revives Arm. The gang is destroyed and their stolen wealth is redistributed among the poor; while General Matsika finally realizes that his children need more freedom.

15
Juvenile literature about a group of children living in a castle, looking for a treasure
12
Story about two siblings who run away from home and stay in a museum at night
4
Children book with two main characters exploring Fibonacci sequence, Golden ratio
3
Identify a novel about British soldiers assisting African ruler
5
Looking for a short story about a person whose conversations run from A to Z
2
A novel with a female teenage protagonist with Middle Eastern recipes interspersed with the prose
15
Medical school that brainwashes students, run by drug company that does unethical experiments
1
Book about a single-mother family, children go to a hollow tree