Why does Linus say “I think you finished it” to Sally in this Sunday strip?

So in December 22nd, 1985, Charles Schulz made this following Christmas themed Sunday panel featuring Linus and Sally. Linus is reading Sally the second chapter of the Book of Luke (from the Bible), and makes a remark about how King Augustus is near-forgotten while Jesus has an entire holiday dedicated to his birth. Then Sally remarks a rather egotistical statement about how everyone loves her, with Snoopy looking shocked. Linus starts walking away and when Sally asks why he isn't finishing the story he says, "I think you already finished it."

This panel always confused me. I know there's some sort of message here, but I never understood it. It's not true that no one paid any attention to Sally when she was born, because Charlie Brown literally ran out of the house screaming "I'm a father - I mean my Dad's a father - I'm a brother! I have a baby sister" With Linus comically telling Lucy "You didn't act that way when I was born."

Later Charlie Brown pretty much throws a party with everyone getting chocolate cigars (including Snoopy) and talking about how proud he is to be a big brother.

Can someone explain this strip? 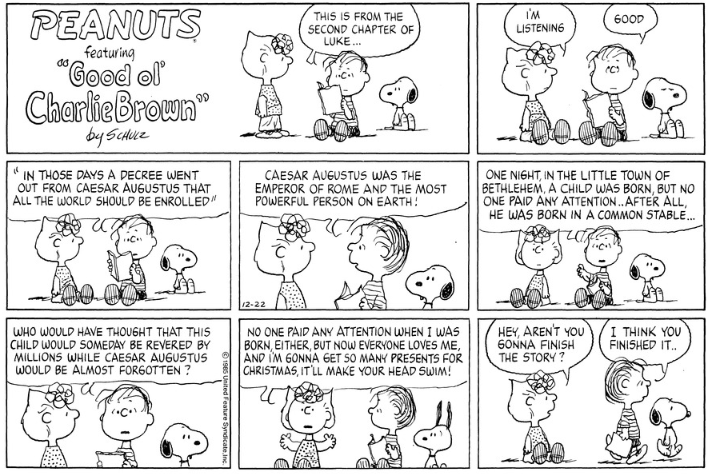 I think this is a play on the word "finished". Relevant definitions of "finish" from Google are:

bring (a task or activity) to an end; complete.
"they were straining to finish the job"

kill, destroy, or comprehensively defeat.
"the English men-at-arms finished them off in hand-to-hand combat".

As regards the latter definition, Dictionary.com tells us that

The story Linus is telling has two points to it. In the first, it is a reminder that the original meaning of Christmas is literally Christian. It celebrates the birth of a figure who encouraged charity and humility. In the second, he reflects on the reasons why certain historical figures are remembered and others are forgotten, and how impossible it is to predict.

Sally's reply indicates she has understood neither point. Her focus is entirely selfish and greedy, showing she has no interest in the wider Christian message of the festival. Her narrow statement that "now everyone loves me" shows her ignorance of the point Linus is making about the vast unlikeliness of being remembered or the reasons why a few people are.

He's saying she finished it because she essentially just told the rest of the story.

(My Christian theology is a bit sketchy, but I think I know enough to explain my thought process here.)

Linus is telling, literally, the story of Jesus. He's going over his birth when Sally cuts in, saying

Nobody paid any attention when I was born either, but now everyone loves me, and I'm gonna get so many presents for Christmas, it'll make your head swim!

What Sally is saying here could easily be a description of Jesus. Linus has just shown that "nobody paid any attention" when he was born. Now, though, "everybody loves me" - Jesus is a pretty major part of one of the largest religions in the world.

Christmas is supposedly a celebration of Jesus's birth. If I understand correctly, when Jesus was born, three men showed up bearing gifts for him. So, at Christmas, he received a lot of gifts.

Basically, what Sally is saying here could easily be understood as "finishing" the story that Linus was telling, as what she's saying can be interpreted as the rest of the story of Jesus.

Not the answer you're looking for? Browse other questions tagged meaning charles-m-schulz peanuts or ask your own question.

4
What exactly does Dickens mean to say here?
2
What does “have you no cacke a bed” mean?
1
Does “think” mean “think about” or “think by” in “The Secret of Father Brown”?
2
What does this metaphor mean: “You can die on St. Helena without being Napoleon.”
3
What does Justice Scalia mean by “Thoreauvian 'you-may-do-what-you-like-so-long-as-it-does-not-injure-someone-else' beau ideal”?
1
What does “you can’t possibly have gone through life as carelessly as you made out” means here?
1
What does “It made me think that throughout my life, up to this point, everything I’d done had felt either irrelevant or replaceable.” mean here?
2
“How say you then? Would heart of man once think it?” Hamlet Act 1 Scene 5