What is the figurative meaning of "were you not borne at home"?

In the "novel" Thomas of Reading by Thomas Deloney, there is some sort of weaving or cloth making competition between the London weavers and a few clothiers from other towns (including one named Weasell). The relevant passage in Chapter VI goes as follows:

Alas poore fellows (quoth they [the London weavers]) your hearts are good, but your hands are ill.
Tush, the fault was in their legges (quoth another) pray you friend, were you not borne at home?
Why doe you aske (quote Weasell)?
Because (said he) the biggest place of your legge is next to your shoe.

What is the relevance of "were you not borne at home?"? It appears to have some figurative meaning that I am not familiar with.

The ‘borne at home’ line is the set-up for a joke about puny legs and potentially also a pun on the weaver's legitimacy. (The previous paragraph says the town weavers made ‘frumps’ at the country weavers. ‘Frumps’ being jibes or sneers.)

One of the London Weavers says the country weaver has bad hands. Another claims it is the weaver's legs that are the problem.

Legs are as important as hands for weavers, as they use them to operate the treadles that move the shaft and heddles that lift the warp threads to allow the shuttle carrying the weft thread to pass between them. This drawing seems to show a loom of approximately the right period. You can’t really follow how the thread separation works, but the treadles are clear. 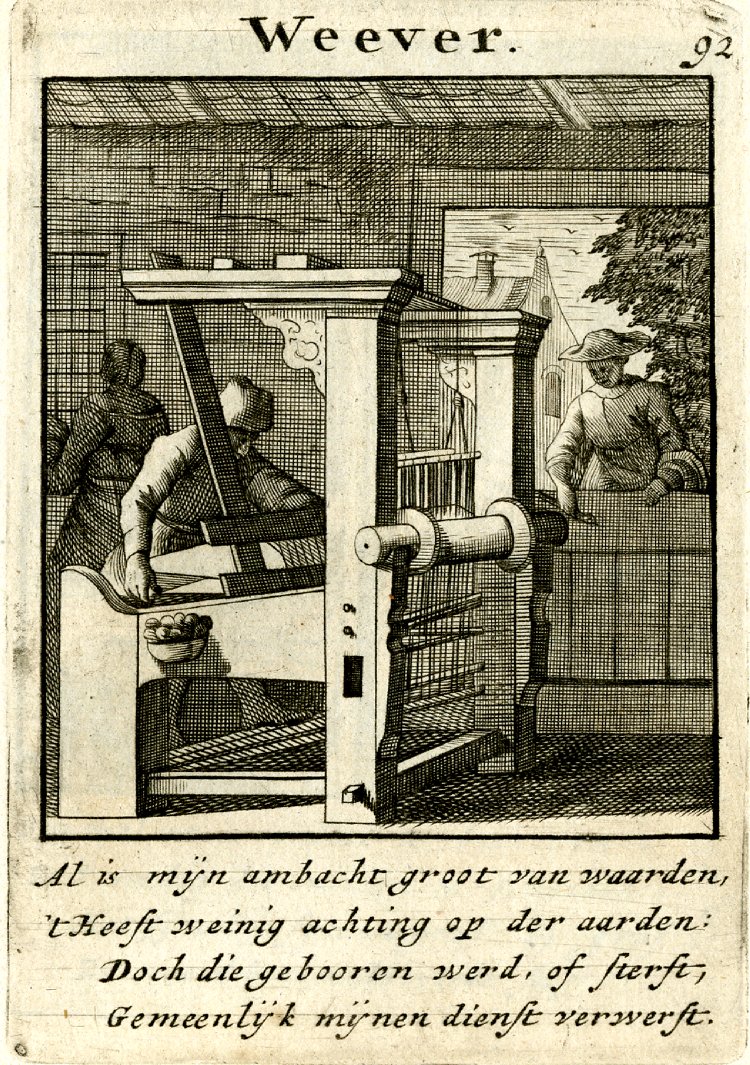 When the London weaver says that the biggest part of the country weaver’s leg is by his shoe, it is a roundabout way of saying that he has no calf muscles (and possibly fat ankles).

In light of this ‘borne at home’ would mean ‘carried at home’ rather than ‘given birth to at home’, emphasising the utter uselessness of the country weaver’s legs.

I also found this book 'An Exposition of the Morall Law: Or Ten Commandments of Almightie God' from 1639 which uses the phrases 'borne at home' and 'borne abroad' to differentiate between those who are 'borne of one father' and those 'borne of one mother, but not begotten of one father'. This is likely based in the terminology of Leviticus 18:9. In the 1560 Geneva Bible this verse was translated "Thou shalt not discouer the shame of thy sister the daughter of thy father, or the daughter of thy mother, whether she bee borne at home, or borne without: thou shalt not discouer their shame."

This opens the possibility that the question 'were you not borne at home?' is a pun, as has been suggested, but one that requires that contemporary understanding. The putative pun being that 'were you not borne at home?' can be interpreted as , 'Didn't your mother put it about a bit such that all your siblings have different fathers?' OR 'Do they carry you everywhere at your house?'

4
What sort of "relief of the poor" is Thomas Deloney alluding to?
7
What does ketha mean?
8
What does "have you no cacke a bed" mean?
4
Who were the tongueless men of Coromandae?
3
What does "the gathers" mean?