Which of these sources is right about "The Tempest"?

This is part of a quote by Ferdinand in the beginning of scene 1 of act 3 of "The Tempest":

But these sweet thoughts do even refresh my labours,
Most busy, least when I do it.

But shakespeareswords.com offers this from the First Folio:

But these sweet thoughts, doe euen refresh my labours,
Most busie lest, when I doe it.

and litcharts.com offers yet another version (without saying what the "original" is taken from):

But these sweet thoughts do even refresh my labors,
Most busiest when I do it.

Which is right and how should I interpret the sentence?

Shakespeare wrote his works in a variety of English known as Early Modern English. At that time, English spelling had not yet been standardised and plays were not highly regarded as a form of literature. As a consequence, the early printed versions of Shakespeare's plays contain a lot of deviations from present-day English, for a number of reasons:

As a consequence of this, a modern editor of Shakespeare's plays needs to make a number of decisions:

Different editors make different decisions and their response to the above questions are some of the reasons why editions of Shakespeare's plays present different texts. Aside from obvious mistakes made by the editors, there is no real right or wrong.

In the First Folio, Ferdinand's first speech in Act 3, scene 1 ends as follows:

But theſe ſweet thoughts, doe euen refreſh my labours,
Moſt buſie leſt, when I doe it.

The ſ is an archaic form of s, so a minimal modernisation would result in the following:

But these sweet thoughts, doe euen refresh my labours,
Most busie lest, when I doe it.

Further modernisations would replace "doe" with "do", "euen" with "even" and "busie" with "busy":

But these sweet thoughts, do even refresh my labours,
Most busy lest, when I do it.

Modernisation normally also adapts the punctuation to modern conventions, so the version hosted by MIT looks as follows:

But these sweet thoughts do even refresh my labours,
Most busy lest, when I do it.

So it is not a matter of right or wrong but how far you go with modernisation. This in turn depends on the intended audience. An edition aimed at a scholarly audience is typically more conservative in this regards than editions for the general reader.

Editors also clarify the meaning of passages that are unclear. The first line of the quote roughly means, "These sweet thoughts (about Miranda) give me new energy for my work", but the second line is a "crux" and has left editors guessing as to what Shakespeare actually meant.

"buſie leſt" is the most notorious crux in The Tempest, and editors have emended it in various ways, for example:

In the Arden Shakespeare edition (second series) Frank Kermode wrote a two-page footnote arguing for "busilest", which is similar to Bulloch's conjecture "busiliest". This turns the phrase into an adverbial superlative, similar to two word formations elsewhere in Shakespeare's plays: "easilest/easiliest" in Cymbeline, Act 4 Scene 2 and "maidenlest/maidenliest" in King Lear, Act 1, Scene 2.

Before Kermode's edition of The Tempest, first published in 1954, many editors went along with Spedding's conjecture, based on an interpretation in the sense of "I am least engaged with my work when I am most engaged with these thoughts". Kermode argues that this reading is almost the opposite of what the context requires, since Ferdinand seems to say that these thoughts (of Miranda) are busiest when he is busiest (piling logs). Hence his emendation "Most busilest when I do it." He sees no convincing reason to mend "I do(e) it".

Based on this, my reading of these two lines is as follows:

These sweet thoughts (about Miranda) give me new energy for my work,
It is when I think these thoughts that I am most active.

There is no consensus on who is right. The punctuation placement, the spelling - editors disagree on all of these points.

First, I should give a note on why the punctuation would change. At the time Shakespeare's plays were published in the First Folio, punctuation had not been standardized as a system for marking syntax. An introductory guide to punctuation in the period would explain that it was flexible; as Walter Ong explained in “Historical Backgrounds of Elizabethan and Jacobean Punctuation Theory.” (PMLA, vol. 59, no. 2, 1944, pp. 349–360), punctuation was partly performative, corresponding to when someone reading aloud might need to take a breath; it was only inconsistently about syntax or elocution:

The present study shows that ... behind the punctuation theory of the time, which was based on a mixed set of principles, there was a factor which is not included under either a syntactical or an elocutionary system as these systems have been understood. This factor was the original theory of the late classical and the medieval grammarians, for whom punctuation was first of all a system demanded by the exigencies of breathing in oral delivery and only secondly (at first rather negatively) a means of interpreting the sense. Lying at the background of Elizabethan and Jacobean theory, this view of punctuation accounts for a practice which is loose by either syntactical or elocutionary standards.

Who set this punctuation? In the case of The Tempest, it could have been the printers of the First Folio in 1623, which was produced after Shakespeare had died in 1616. It could also have been Ralph Crane, a performer in the King's Men, who wrote a manuscript for The Tempest from a possible rough draft. Because punctuation and spelling were not standardized, copiers and printers would often change these elements, and scholars still write about Crane's influence on the text (see Amy Bowles, "Dressing the Text: Ralph Crane’s Scribal Publication of Drama," in The Review of English Studies, vol. 67, no. 280, June 2016, pp. 405–427). So editors would have little qualm about changing punctuation to help readers.

Scholarly editions, recognizing the need to update spelling and punctuation to fit modern reading expectations, and also recognizing that these elements may have multiple valid interpretations, make note of their method of textual editing and, often, choose a primary early text to follow. The Folger digital edition, for example, includes this note after explaining the multiple nature of Shakespearean texts:

But these sweet thoughts do even refresh my labors,

Most [busiest] when I do it. editorial emendation

So they note that they have made an interpretation that goes beyond updates to spelling. Indeed, the First Folio reads:

But these sweet thoughts, doe euen refresh my labours,

Most busie lest, when I doe it.

So the Folger editors, working from the First Folio, have combined what appears to be two words and gotten rid of the punctuation. Here's how they explain the choice in the print edition by the same editors:

This difficult line is printed in the Folio as "Most busie lest, when I doe it, and sometimes appears in editions as "Most busil'est when I do it." There is no agreement about what "busiest" (or "busil'est") modifies, nor about what "it" refers to.

No agreement indeed. Other editors resolve the issue in other ways; this 2002 edition of The Tempest construes the line as

Most busy, least when I do it

with a long paragraph explaining their choice of emphasizing the busy and least rather than trying to make sense of the passage by construing the line as busiest. The comma provides an additional emphasis of their editor's reading, even though it wasn't present in the First Folio.

Who is right? Is inventing one word from two or moving the comma a bigger deal? Those questions approach The Tempest as if an authoritative answer is possible. In this case, we have a manuscript, a First Folio, and subsequent folios, and a line that is difficult to interpret as written. These editors are all trying to make sense of the line, which doesn't quite make sense even to experts. Each edition reflects an effort to balance preserving the text(s) and making sense of the text(s), and in this specific case changes are made based on how the editor reads Ferdinand's previous actions against this specific line. There is no consensus.

This is a supplement to the excellent answers already provided. The Tempest is one of 18 plays which were first published in the 1623 First Folio, so all subsequent editions derive from the Folio text. The differences in the various editions cited in the question all reflect decisions made by the editors of those particular editions.

A facsimile of the First Folio is hosted at the Internet Shakespeare site of the University of Victoria, Canada. The Folio text is as follows:

But theſe ſweet thoughts, do euen refreſh my labours,
Moſt buſie leſt, when I doe it.

Act III Scene i begins on page 10 of the Folio. Here is a cropped image of the Folio page showing this text at the bottom: 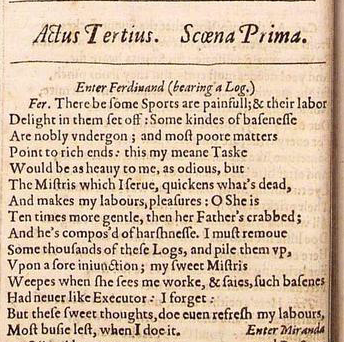 Tsundoku's answer does already quote this text, but I thought the picture and the explanation that the text of The Tempest is known only from the Folio would be useful.

5
Meaning of some phrases and lines in "Quality" by John Galsworthy
5
Is Caliban of Shakespeare's "The Tempest" based on a real life character?
8
Why does Macbeth say ‘throw physic to the dogs’?
6
Where did Edmond Malone place the Tempest in the chronology of Shakespeare's plays?
3
The Unity of Action in Shakespeare's "The Tempest"
7
How can we reconcile the bareness of Shakespearean stages with the complex stage directions of The Tempest?
1
What does Edgar Allan Poe mean by "supererogation is not presumable of any Divine Act"?
7
In Macbeth, why is Fleance 'scaped?
1
Why was Miranda prohibited from telling her name to Ferdinand in "The Tempest"?
11
Do we have any solid evidence for how much material Middleton contributed to Macbeth?