How much of "For Whom the Bell Tolls" is based on real events?

Ernest Hemingway wrote For Whom the Bell Tolls, the story of an American soldier fighting in the Spanish Civil War, a few years after his own experiences as an American journalist reporting on the Spanish Civil War. I know that various real-life figures appeared or were referred to in the novel, but I'm not sure how many of the events described therein really happened.

How much of For Whom the Bell Tolls was describing or referencing actual events?

Answers could be based on quotes from the author or from someone else knowledgeable about the Spanish Civil War, or on comparisons between the text and historical records.

The Spanish Civil War lasted from July 1936 - March 1939. To give a brief summary, the war was fought between the Loyalists who were defending the current Government against the Nationalists or "fascists" (as Hemingway referred to them) which were supported by Benito Mussolini and Adolf Hitler and were led by General Francisco Franco.

Hemingway sympathized with the loyalists as is evident in this novel. One of the main examples of this is the protagonist, Robert Jordan who fights on the side of the loyalists against Franco's "fascist" forces. Another example is Robert Jordan's love interest, Maria who was raped and orphaned by the fascist regime.

The following are events that actually happened and are referenced in the novel: 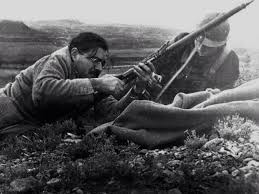 The most significant part of the novel is the bridge that Robert Jordan is planning to blow up. The bridge and the planning of its demise is the central plot to the novel. There has never been any definitive proof that the bridge in the novel was real. Hemingway never spoke of the bridge being an actual bridge. Literary scholars maintain that the bridge is simply used as a metaphor.

A real bridge does exist, over the Eresma stream. It's south side housed a small front line republican position, though manned by regular troops, not guerillas. The remains of trenches and living quarters can still be seen here. However, the book suggests that this was to be destroyed before the Nationalists counterattacked. In reality the republican 14th International Brigade crossed the bridge in their attack, and again in their retreat. It is also implied in the book that the attack failed through treachery and incompetence. A republican sergeant did in fact betray details of the attack to the nationalists, but was ignored. What alerted them to the imminent offensive was seeing the headlights of lorries moving troops towards the front line. Disunity in the republican ranks certainly played a large part in the attack's failure, though, with a conspicuous lack of communication between the infantry, artillery and air forces. One unit got lost in the woods.

Not the answer you're looking for? Browse other questions tagged ernest-hemingway for-whom-the-bell-tolls historical-context or ask your own question.

11
Did Robert Jordan name himself after Hemingway's character?
10
Is there any evidence that George Orwell read 'For whom the bell tolls'? Did Hemingway read 'Homage to Catalonia' or (later) '1984'?
4
Was the assassination plot in The Thirty-Nine Steps based on any real plot?
2
Why did Hemingway include the following in his book, the Moveable Feast?