I've always been a huge fan of Arthurian legend, and have read many books and comics etc inspired by it. But I've always wanted to read a telling of the stories that was much closer to the source so to speak.

After some cursory googling the best lead I have is Le Morte d'Arthur. I was hoping some more learned folks might have recommendations for good annotated editions of this text that would be appropriate for, let's say an enthusiastic amateur of Old European Lit.

The edition I own of Le Morte d'Arthur is the Penguin Classics version in two volumes: 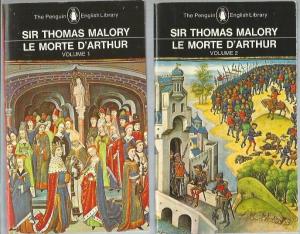 I'd highly recommend it for someone who's accustomed to reading English literature with old-fashioned turns of phrase (from Shakespeare to the various 19th-century authors or even Tolkien) but not necessarily with archaic, obsolete, or inconsistent spellings of words.

This edition has modernised spelling (familiar words are spelled in familiar ways for today's readers) but retains many archaic words (lots and lots of words never used nowadays, like "hight" for instance), which are all marked with endnotes and listed carefully in an appendix with their translations into modern English. It also has lots of very old-fashioned turns of phrase (phrases in an unexpected order, long run-on sentences, etc), but remains readable for any well-read English literature enthusiast. As well as the endnotes on unfamiliar words, there are also endnotes on some other aspects, such as differences between the Caxton and Winchester versions of the manuscript, or commentary on some apparent contradictions.

Personally, I found reading this a very fascinating experience. To see how sentences were constructed back then and how a story was told, and to learn lots of new archaic words. It may enhance your appreciation of the English language, even if you're already a voracious reader of works from the last few centuries. It may take you a while to get accustomed to the style of writing (battles are described as "So-and-so unhorsed So-and-so, then So-and-so unhorsed So-and-so, then ..." - lots of repetitive prose, lists, etc.) but when you do get used to it, you may really enjoy it.

There are two versions of Malory's Le Morte d'Arthur: the text as printed by Caxton in 1485, from which I believe the Penguin edition is derived, and the "Winchester Manuscript" text, not printed until 1947. Apparently this was the text as it left Malory's hand; Caxton used it in preparing his version.

My copy of the latter, in the Oxford Standard Authors series, edited by Eugène Vinaver, is surprisingly easy to read. There is a glossary at the back of the book, and I have never regretted the lack of footnotes. Although there has been a lot of vocabulary and orthography change in the English language between 1450 and now, the language itself is basically the same language we speak nowadays, and reading this edition is like visiting a place where they speak a different dialect from yours: you pick it up. I read the first 40 pages to my 5 year old kid, who had no trouble understanding it; we stopped because the next bit ("Balin") bored us.

The Winchester text is not merely much closer than Caxton's to what Malory actually wrote, it also establishes that Caxton freely edited and recast Malory's work. For the general reader this is a much livelier book, and its fifteenth-century English presents few difficulties. The reader's eye quickly becomes accustomed to the old spellings...

I agree with the second and third sentences. (As I copied this, I saw that I paid six dollars for this book when I bought it in an earlier millennium.)